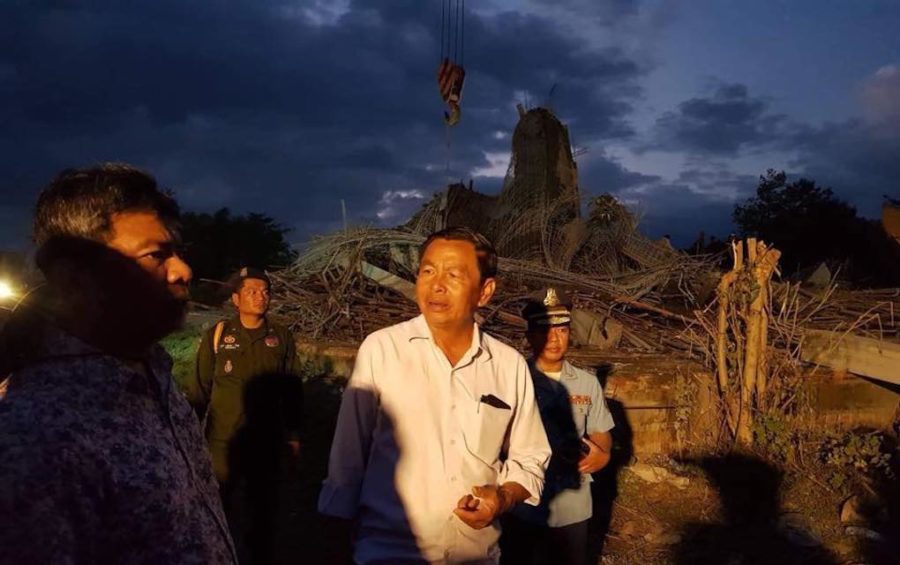 Officials visit the site of a collapsed pagoda building on December 2, 2019, in this photograph posted to the Siem Reap Provincial Hall’s Facebook page.

Land management officers and court officials have begun an investigation into the causes and blame for the collapse of an under-construction pagoda dining hall on Monday that killed three people and injured at least 13 others.

The pagoda hall in Siem Reap province, measuring about 30 meters wide, 40 meters long and 8 meters tall, collapsed at about 2:15 p.m. on Monday as monks and builders were working on constructing a concrete upper floor, according to a statement from the provincial administration.

Three people died and 13 were injured, including three who sustained serious injuries, according to the statement, issued after search teams finished pulling people out of the rubble on Monday in Siem Reap City’s Kokchak commune. Two monks were among those who suffered minor injuries, it said.

Provincial police chief Tith Narong said no company or subcontractor was involved in the construction. The pagoda’s monks were building the structure with help from some people with construction experience, he said.

“The monks were building it by themselves, and some people helped them,” Narong said. However, there was one site supervisor in charge of the work who was also injured, he said, though he would not elaborate on who he considered was responsible.

“Now, the authorities are working” on the case, he said. “The court is looking into the legality. They are making preparations.”

Court spokesman Riem Chanmony said it was too soon to know if there would be prosecutions.

“There’s no case at the court yet,” Chanmony said.

Hy Say, head of the provincial land management department, said his officers and experts from the ministry had begun an investigation into the causes of the collapse.

“The ministry’s working group is investigating,” Say said. “It’s not clear yet.”

A building collapse in Sihanoukville in June killed 28 people, prompting a review of building permits and illegal constructions in Preah Sihanouk province.