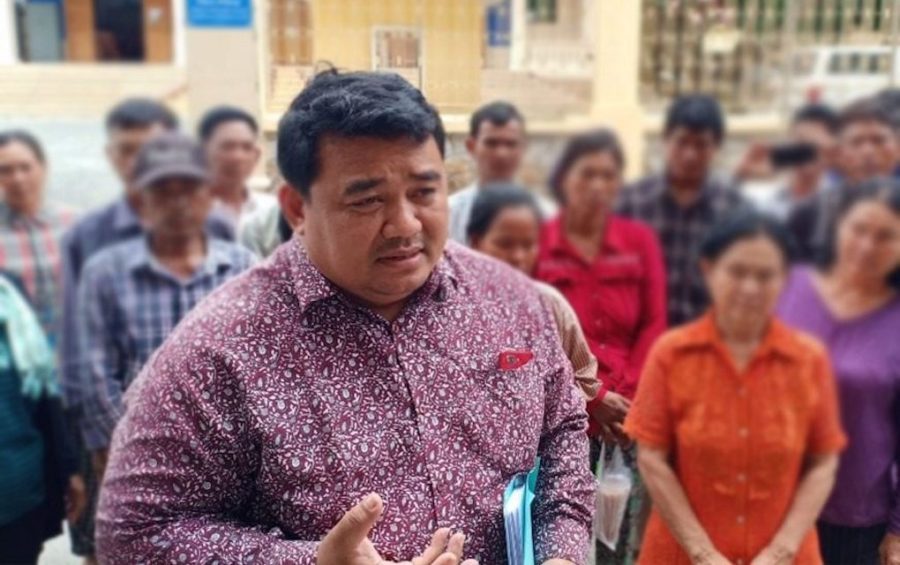 A journalist and radio station owner in Kampong Chhnang province was jailed on Friday on incitement charges in relation to his “exaggerated and inciting” news coverage and comments on a land dispute, officials said.

Sok Udom, owner of the 99.75 FM radio station and Rithysen news website, was provisionally detained after he was questioned in court and charged with incitement to commit a felony, said Chhuon Sivin, a provincial court spokesman.

“Sok Udom incited and provoked people to protest, accusing authorities of taking a military base and state land as personal property, which caused confusion and loss of trust in authorities and affected social security,” Sivin said.

The charge carries a maximum penalty of two years in prison and a 4 million riel fine (about $1,000). Freedom of the press, assembly and expression are protected rights under the Cambodian Constitution.

Udom was arrested on Wednesday for allegedly inciting people to occupy land in Phnom Oral Wildlife Sanctuary within the province, and then sent to court on Thursday, provincial police chief Khov Ly said.

“He broadcasted to incite people to encroach land in Phnom Oral Wildlife Sanctuary in Cheab commune,” Ly told VOD on Thursday. “That is a crime and a red-handed crime.”

The arrest came as the Information Ministry revoked Udom’s media license, describing the reporter’s posts on Facebook as “exaggerated and inciting” news that violated professional standards and could cause violence, racism, insecurity and chaos in society.

On Monday, Udom posted to his Facebook page, Rithysen, about an alleged illegal construction in Kampong Chhnang City, which he claimed was owned by a Vietnamese national.

He then posted a video of a protest on Tuesday in Teok Phos district’s Cheab commune, in which residents accused provincial authorities of grabbing land within the wildlife sanctuary.

“We want to question whether the provincial governor held a meeting to take the land from people who rely on it,” Udom said in the 50-minute video. “What you are doing is tearing apart [the people’s] votes in support of the government.”

Before he was arrested on Wednesday, Udom accused law enforcement of nepotism and corruption in another Facebook post.

“After he was educated, we still have seen his broadcasts go against the code of journalism ethics, [and] violate the contract upheld by the Information Ministry and provincial information department,” Sophorn said. “So the ministry decided to cancel his license.”

Udom acquired a media license for the radio station in 2014 and for his website in 2018.

Yon Sineat, a board member of CamboJA, an independent journalists’ association that includes VOD staff on its board, said the Information Ministry’s decision to revoke Udom’s license before he was charged with a crime sent a threatening message to journalists reporting on the government and officials.

“Any media outlet that tries to critically report [on the government] in order to improve and develop society, provide accurate information for the benefit of the public and their ability to make decisions, or criticize in a constructive way, is not often welcomed [by the government],” she said. “Instead, they are frequently suppressed and threatened, leading to the imprisonment of some reporters. That is a direct threat to press freedom.”

The online news outlet TVFB lost its license after its editor-in-chief, Sovann Rithy, quoted an excerpt from a speech by Prime Minister Hun Sen in which he said struggling motorbike taxi drivers should sell their vehicles because the government could not afford to help them through the ongoing economic slowdown. Rithy was also jailed on incitement charges.

At the end of the month, news website CKV TV Online, which is owned by Chan Rithy, also lost its media license after the Information Ministry said it violated its contract and professional standards.

Cambodia ranked 144th out of 180 countries in Reporters Without Borders’ 2020 World Press Freedom Index, slipping one place from its rating last year.