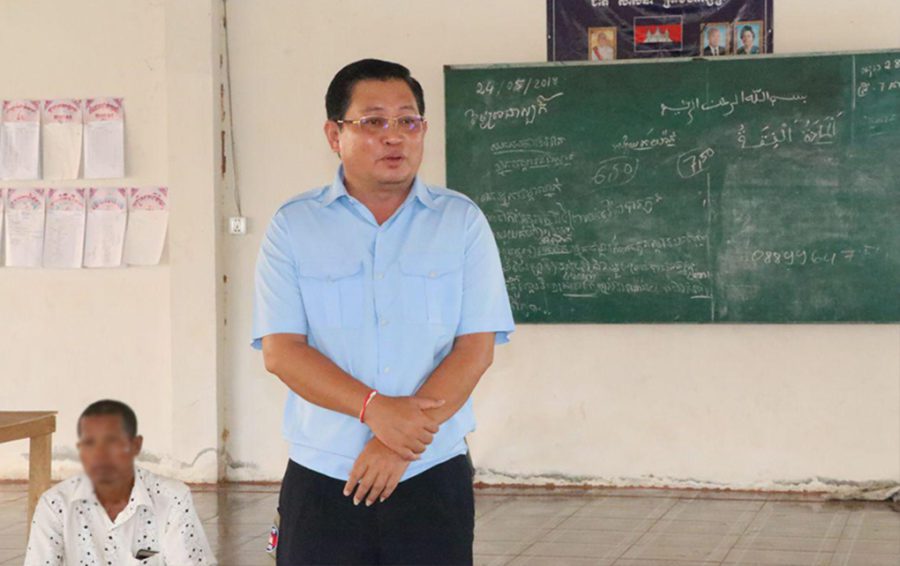 Representatives of 149 families in Preah Sihanouk province have filed a court complaint against two local journalists and six interviewees for allegedly inciting violence through misleading reports about a land dispute.

In a complaint to the Preah Sihanouk Provincial Court, Morn Sina and Keo Leng accuse Hun Sokha — operator of Facebook news page CPNTV-Online-Cambodia — and others of collusion, incitement to commit a felony and incitement to discriminate under the Criminal Code. The complaint demands that legal action be taken against the defendants and also $200,000 in compensation.

The 149 families say that they have been locked in a land dispute with Him Sovanry in Stung Hav district’s O’Tres commune since 2010, when Sovanry bought a piece of land without realizing the families already lived there.

The two sides are awaiting a Supreme Court judgment on the dispute. But Sokha and CPNTV colleague Khiev Polo nevertheless posted video reports on March 29 and April 19 saying the 149 families were at fault, the complaint says.

The CPNTV broadcasts also urged 320 other families who are affiliated with Sovanry to take control of the 135 hectares of land, the complaint adds.

“These 320 families could use violence to take control of the land that the 149 families are in the process of resolving according to legal procedures,” it says.

The 1995 Press Law says that if any someone believes a published news article is false and impacts their dignity, they can demand a retraction or right of reply to be published within seven days or in the next issue of the publication.

Sina told VOD that he demanded a correction but Sokha failed to publish one.

“I have all the evidence. The people in Kompong Som know all about this,” Sina said, using a name for the province officially used in the 1970s and 1980s. “I went to explain [our case] on the Hang Meas [TV] channel. I explained everything. But even though we did our best to clarify the situation, it seems to be ineffective. Now we have to file a lawsuit, because our country has laws.”

However, Sokha insisted his team had followed proper journalistic ethics. He rejected the accusations, and said he was considering filing a countersuit.

“I did not talk about the land issue. I talked only about the parish hall,” Sokha said, referring to the local hall from which he had streamed his news broadcasts.

Sokha is listed on the court complaint as also being the head of the Club of Independent Journalists. On his Facebook profile, he also also lists himself as a member of the ruling Cambodian People’s Party in neighboring Takeo province.

“We only know that we have seen a legal document issued by local authorities. We follow the law. We don’t just do anything and we do not just say anything.”

In the video reports cited in the complaint, CPNTV cites an official document to say that only six out of the 149 families legally owned the land under dispute, and interviews several members of the 320 families affiliated with Sovanry.

Chhay Sophal, executive director of the Club of Cambodian Journalists, said members of the public had the right to file complaints against reporters but that he believed it was unfortunate that the O’Tres case had gone as far as the courts.

“An article can be complete or incomplete,” Sophal said. “If there is anything unfairly balanced against any individual or against any group, they can ask reporters to make a correction according the Press Law.”

“They do not just have to sue under the Criminal Code.”

Sophal also urged Cambodia’s reporters to more clearly understand their ethical and legal obligations in order to avoid violating the rights of others.

Lim Bunheng, a spokesman for the court’s prosecutors, said that the complaint against CPNTV was accepted on April 23 and the case was being investigated.