Journalists Call for Dismissal of Spying Charges for RFA Reporters 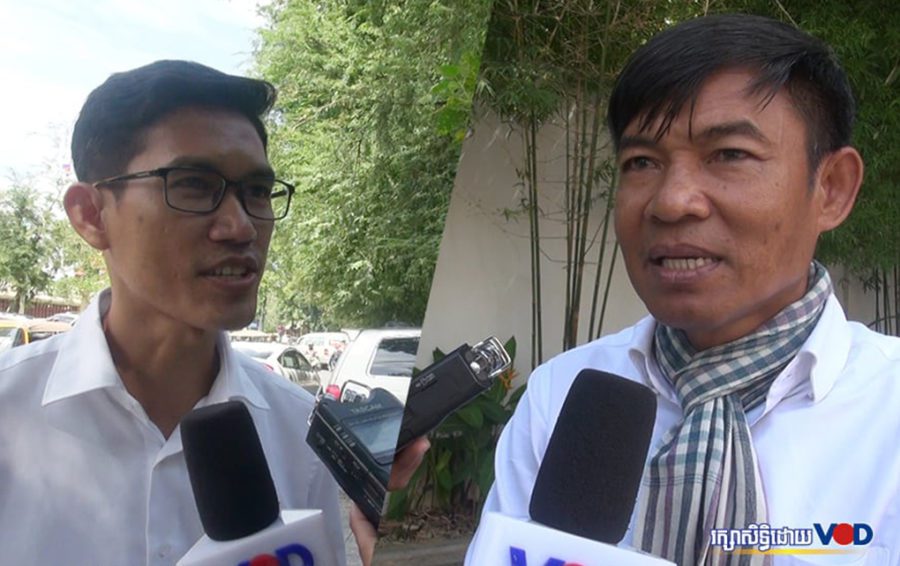 A group of 50 Cambodian journalists has issued an open letter calling on the Appeal Court to drop espionage charges against two former Radio Free Asia (RFA) reporters and release them from judicial supervision tomorrow.

Uon Chhin and Yeang Sothearin were arrested in November 2017 for allegedly continuing to secretly report for the U.S.-funded RFA after its office in Phnom Penh was shut down and charged with collecting information for a foreign government.

They were released on bail weeks after the July 2018 national election amid a slew of releases of political prisoners. The Appeal Court is tomorrow due to hear their arguments against a decision to place them under court-ordered monitoring.

In an open letter on Thursday, a group of 50 reporters from different media outlets claimed the charges against the former RFA reporters had led to an atmosphere of fear among other professional journalists and impacted on press freedom.

The letter calls on the charges against the pair to be dropped and for an end to the judicial supervision, which it says has impacted their ability to return to work.

“We, the undersigned, are seriously concerned about the serious charges against the two,” the letter says. “Moreover, placing them under judicial supervision makes it difficult for their lives and they cannot continue to carry out work as journalists.”

“They cannot change their residence without permission from the investigating judge, cannot travel overseas and have to report to the police once a month.”

Sothearin told VOD he hoped the court would acquit him and Chin and allow them to regain the freedoms they had before the arrest during the 2017 crackdown. He said the strict requirements of the bail were too tough and prevented him even from travelling to see his family without seeking official permission first.

“It is difficult for both of us in carrying on with our careers and it affects our freedoms. Regarding the ban from traveling, I missed my homeland and I want to visit my homeland and my parents,” Sothearin said. “We want to go abroad to gain more knowledge for ourselves but cannot do it. Currently, they require us to ask permission for that and show up to police every month.”

Appeal Court spokesman Touch Tharith said the journalists had the right to issue a letter but the decision was up to the judge’s discretion. “I will send this document to the panel of judges to let them decide according to the law,” Tharith said.

Human Rights Watch also issued a statement on June 19 demanding that the court drop the charges against the pair and allow them their freedoms.

The arrest of Chhin and Sothearin in 2017 came shortly after the forced closure of The Cambodia Daily over a controversial sudden tax bill and before the sale of The Phnom Penh Post over a similar tax dispute. Reporters Without Borders in 2019 ranked Cambodia in 143 among 180 countries in the world for press freedom.