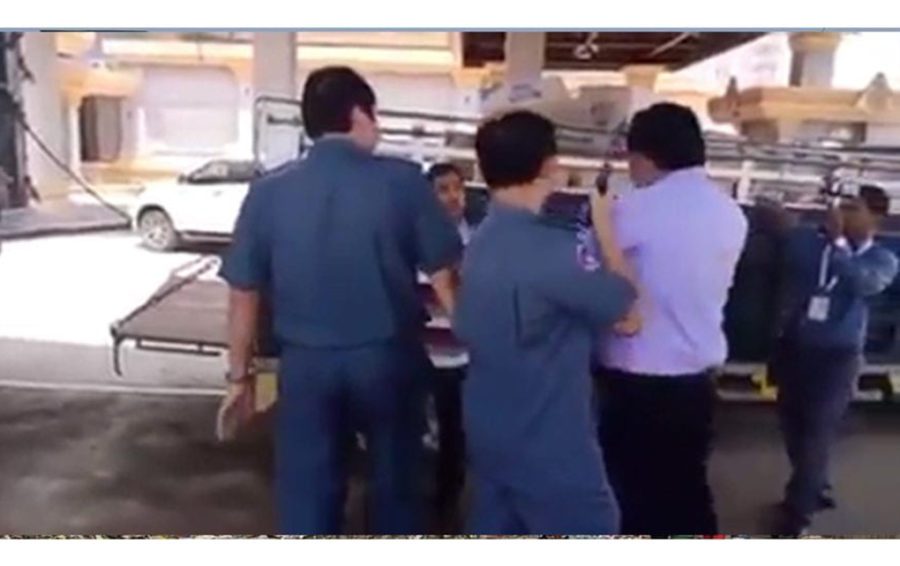 A group of reporters have been taken to court in Kampot province for clashing with customs officers while filming the movement of goods coming in from Vietnam.

A video widely shared online late last month shows Yi Thol, head of the Prek Chak bureau of customs and excise, confiscating a phone and being shoved by one of the reporters.

Khan Sophal, spokesman for the Kampot Provincial Court, told VOD that Thol had filed a complaint to the court, but case prosecutors were yet to be assigned. Local news reports said the complaint was for insult and obstruction of public officials under the Criminal Code, a charge that can carry a prison sentence of up to a year if there are aggravating circumstances.

Hun Sokha, operator of Facebook-based news page CPNTV and one of about 10 reporters facing legal action, said he was prepared to escalate the case by lodging a complaint against customs to the country’s Anti-Corruption Unit (ACU) or Prime Minister Hun Sen.

The reporters had been filming the movement of goods at the border checkpoint after receiving permission from the local police chief, Sokha said.

They had noticed irregularities, he said, alleging that customs officers were allowing businessmen to circumvent duties as well as quality standards.

He said he would keep the details of his allegations secret for now, however, since the case had come under court investigation.

“After I give my testimony, I will hold a press conference in front of the court to clarify all facts related to the case,” Sokha said.

Sokha is also facing legal action in Preah Sihanouk province over his reporting on a land dispute in Stung Hav district’s O’Tres commune. He is listed as head of the little-known Club of Independent Journalists and a member of the ruling Cambodian People’s Party in neighboring Takeo province.

“As for my counter-complaint, we will file it to the ACU or I will submit it directly to Samdech because this is a national matter,” he said.

Club of Cambodian Journalists executive director Chhay Sophal said based on his observations of the video online, both sides were at fault.

However, the journalists appeared to have failed to uphold “professionalism,” Sophal said, without specifying how, and argued that this should be addressed under the Press Law rather than the Criminal Code.

“If reporters are found to have violated their professionalism, we can lodge complaints under the Press Law,” he said.