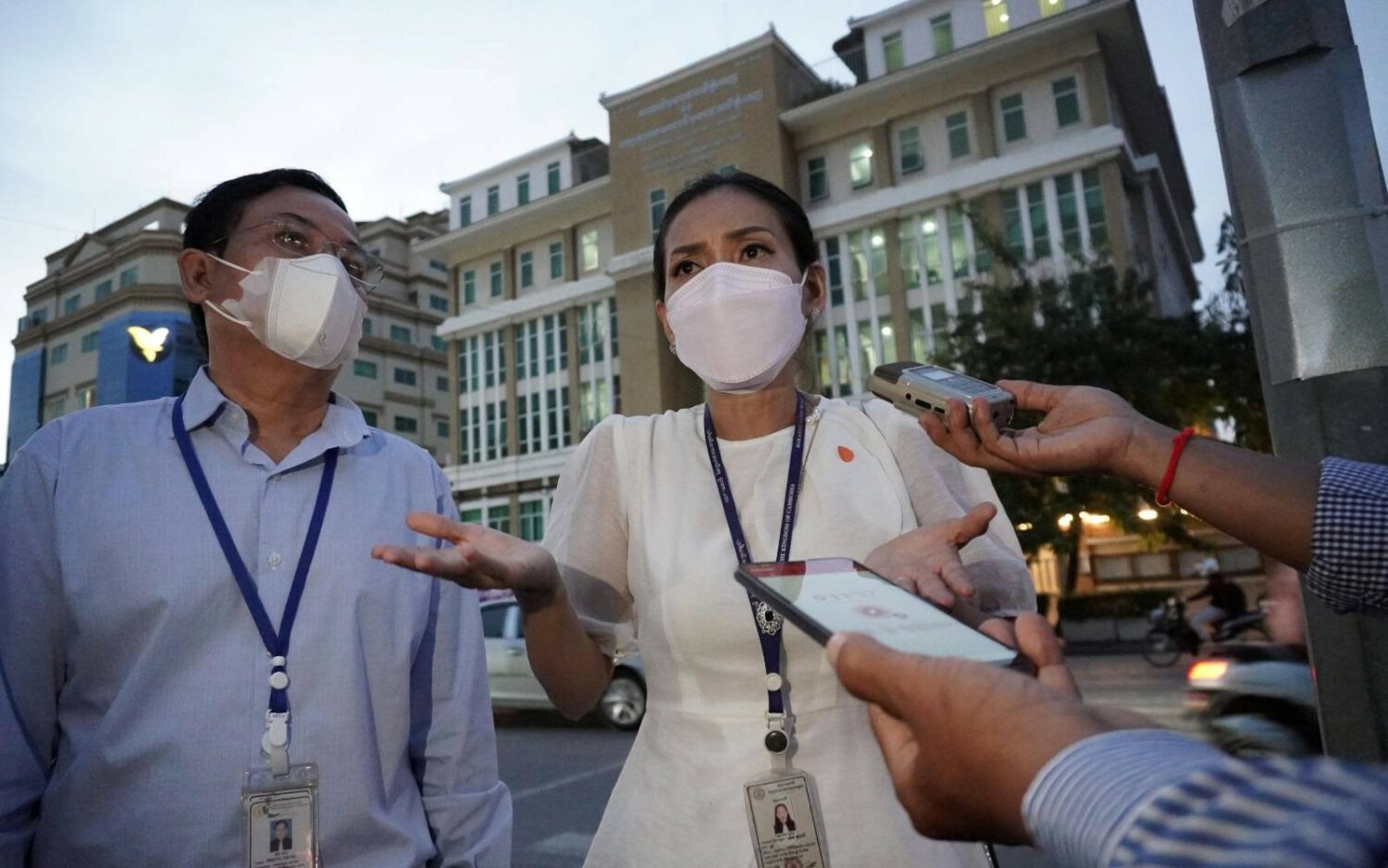 Defense lawyers Pheng Heng and Meng Sopheary speak to reporters outside the Phnom Penh Municipal Court after a hearing in the Kem Sokha treason trial on October 13, 2022. (Hean Rangsey/VOD)

The Kem Sokha treason trial is barrelling toward a verdict as judges announced an end to witness cross examinations and scheduled closing arguments, much to the consternation of the defense team.

The trial completed its 61st session on Thursday, one of two back-to-back hearings this week that questioned nine witnesses about their links to the former CNRP president and the so-called color revolution.

Judge Koy Sao announced Thursday evening that the court had completed the questioning of witnesses, the case was coming to an end and, if there were no other motions, the court would hear closing arguments next.

The announcement caught the defense team by surprise, with Sokha’s lawyers raising their arms in unison to present their objections.

Meng Sopheary, one of the defense lawyers, queried why representatives from development agencies and international and political groups named in the case had not been summoned for questioning. She suggested the National Democratic Institute, International Republican Institute and Serbia-based Canvas, all of which have been at the center of the prosecution’s and government’s allegations of color revolution.

“We did not know that the court would not summon the competent officials. It is a criminal case and the court has a duty to summon them for questioning,” she said.

Pheng Heng, another of Sokha’s lawyers, was next. He said Article 326 of the Criminal Procedures Code said the presiding judge should listen to all witness testimony during the trial, including from the judicial police, which conduct investigations for the court.

Chan Chen, another defense lawyer, said the defense was waiting to question relevant officials who were part of the investigation.

“Please presiding judge, lead the trial from the bottom of your heart and don’t do it casually. Justice for my client’s case is really important,” Chen said.

In previous cases, law enforcement and relevant investigating officers have provided testimony and been subjected to cross examination.

But prosecutor Plang Sophal said he had never seen law enforcement officers testify in court since 2007, when the Criminal Code was formalized. He said the defense could have raised any issues during the investigation phase.

Despite the lawyers’ pleas, judge Sao ruled that nine witnesses were sufficient for the trial and the defense were wasting time by wanting to call more people for questioning.

But Sao momentarily agreed for the defense to submit a list of witnesses they wanted summoned, but in the next breath repeated that questioning had ended in the case and there was no need to summon more people.

The three witnesses participated in training conducted by Canvas, which the government has claimed was intended to teach them to foment revolution.

Even before the questioning could begin, deputy prosecutor Chhay Hong made it a point to talk about Article 545 which deals with false testimony in court and carries a two- to five-year prison sentence.

Defense lawyer Chen objected and said the three had already been sworn in and the prosecutor’s comments were to pressure the witnesses.

“The prosecutor should not raise this article before the questioning. This will make the witness worried and we see it as a threat,” Chen added.

At one point, judge Sao criticized comments that he said an NGO had made to VOD about court procedures. But he later added that he admired VOD for its good work. “Sometimes, I thank you, VOD. They publish very well. The listeners find it acceptable.”

Kem Sokha is being tried for treason and faces life in prison if convicted. He was arrested during a midnight raid at his Phnom Penh villa in September 2017, with the party he led, the Cambodia National Rescue Party, disbanded two months later.

One-hundred and eighteen senior CNRP officials and members were banned from politics for five years by the Supreme Court in the November 2017 ruling, with the ban expected to lift next month.