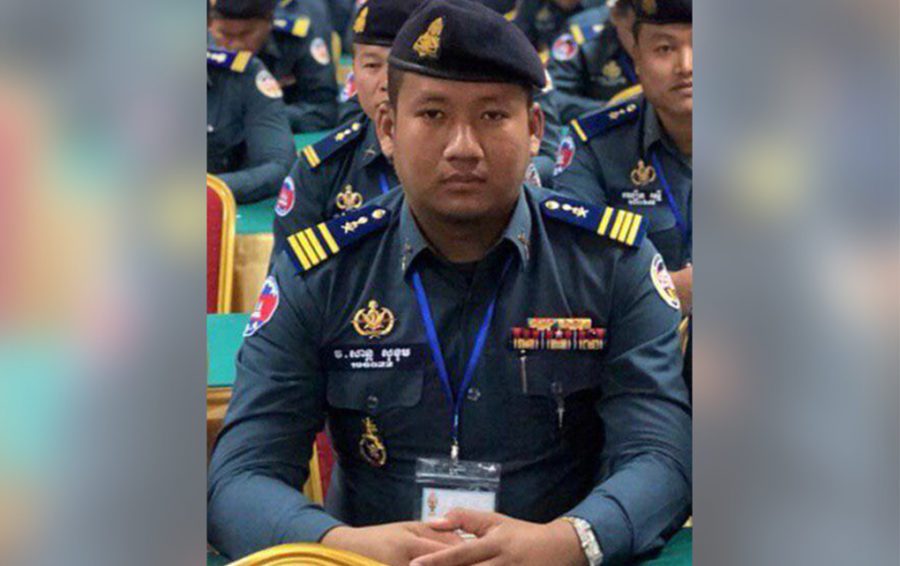 San Sokhom, a military police major in Kompong Cham province and son of the commander of neighboring Kratie province’s military police, has been released on bail despite being charged over making threats with a firearm, officials said.

The major was arrested on March 26 after Prime Minister Hun Sen threatened to oust his father, San Bunthan, unless he was arrested. Sokhom was subsequently charged with three crimes: intentional violence with aggravating circumstances, threatening to use a weapon, and illegal possession of a weapon.

Security camera footage allegedly shows Sokhom in civilian clothes pulling out a gun and attacking two men during a dispute at an internet cafe on March 18.

However, Nuth Savna, a spokesman for the Interior Ministry’s general department of prisons, told Radio Free Asia on May 11 that Sokhom was quietly released from pretrial detention on bail on April 19 despite the violent nature of the crimes.

Savna told the radio program that he was not aware of the reason for the major’s release. Chum Narann, a spokesman for the Kampong Cham provincial court, told VOD he too was aware of the release of Sokhom but also did not know the reason.

“I am just the spokesman. I only know that there was a release,” Narann said. “It is the work of the judge. I do not know why he was released.”

Virak Neat, a clerk at the provincial court, declined to comment and referred questions to provincial prosecutor Huot Vuthy, who also said that he did not know the reason. He suggested asking questions to Investigating Judge Nouv Yarath.

“I don’t know. Wait, I will ask,” Vuthy told a VOD reporter. However, later calls to the provincial prosecutor from the same reporter went unanswered.

Yarath, the investigating judge, could also not be reached for comment.

Article 218 of the Criminal Code states that the crime of intentional violence with aggravating circumstances is punishable with a prison sentence of two to five years as well as fines. Article 20 of the Law on Management of Weapons, Explosives and Ammunition states that any person who possesses weapons or explosives can be imprisoned for between six months and two years, as well as being fined.

Thim Narin, provincial coordinator for Adhoc, said Sokhom’s release on bail was a clear case of double standards, with most people who are charged with crimes being forced into usually long periods of pretrial detention.

Most prominently, opposition leader Kem Sokha has now been kept in pretrial imprisonment and house arrest for over 18 months without any court trial.

“In public opinion, people will say that this secret release has irregularities involved in the case — and we have seen that this type of conduct should be punished according to the law,” Narin said of the military police major. “If the court releases him, it means the court did not properly comply with the same standards.”

(Translated and edited from the original on VOD Khmer)