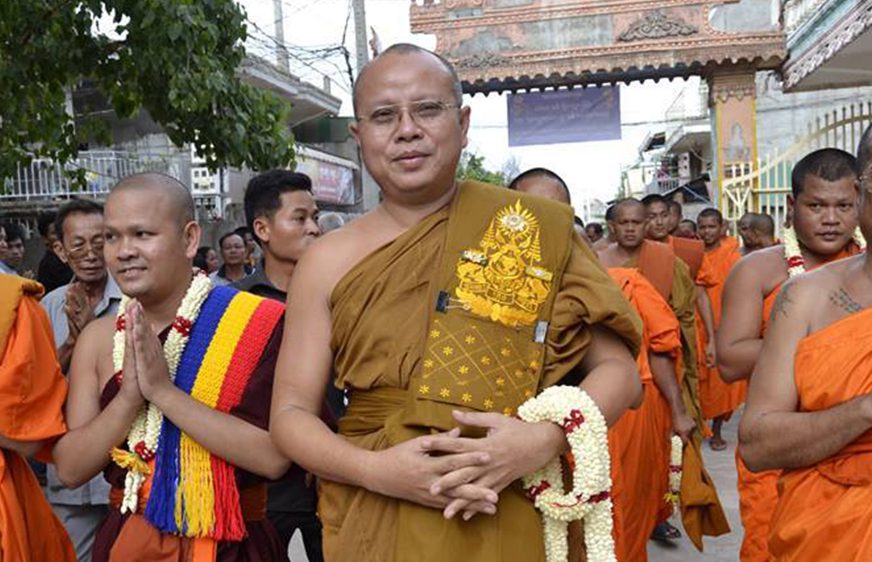 A Kampong Cham monk chief was reinstated after being arrested and defrocked last week for allegedly violating Covid-19 measures.

The monk, Pang Soda, was the chief monk of the Vongkot Borey Phnom Penh pagoda in Kampong Cham’s Chamkar Loeu district. He was arrested and defrocked last week, according to the Friendship of Khmer Kampuchea Krom Association.

The association’s head, Bun Mony, said on Monday that Soda had been reinstated as of Monday but was still in Phnom Penh.

“He is currently in a safe place in Phnom Penh, and he has not yet returned to the pagoda,” Mony said.

Mony added that Soda was arrested last week for allegedly violating Covid-19 measures by inviting villagers to attend a Buddhist water blessing ceremony in the pagoda.

Chamkar Loeu district police chief Pen Teang Chamroeun on Monday said he was not aware of the monk’s reinstatement in the clergy.

Kampong Cham senior provincial police officials Em Kosal and Min Sokunvibol did not comment last Friday on why the monk was arrested.

According to a statement from the Khmer Kampuchea Krom Association from September 3, the monk was arrested on September 2 from the pagoda “without warrant.” Police officials from the commune, district and provincial levels were accompanied by senior monk officials during the arrest.

The statement added that police confiscated the phones of other monks at the pagoda and deleted photos and videos of the arrests, and prevented anyone from entering the residence of Soda.

The association advocates for the rights of Khmer Krom residents of southern Vietnam, which Cambodians call Kampuchea Krom.

Religion Ministry spokesperson Seng Somony on Monday only explained the process of reinstating a monk that had been defrocked, but when a reporter called back to ask about Soda’s case, he did not comment.