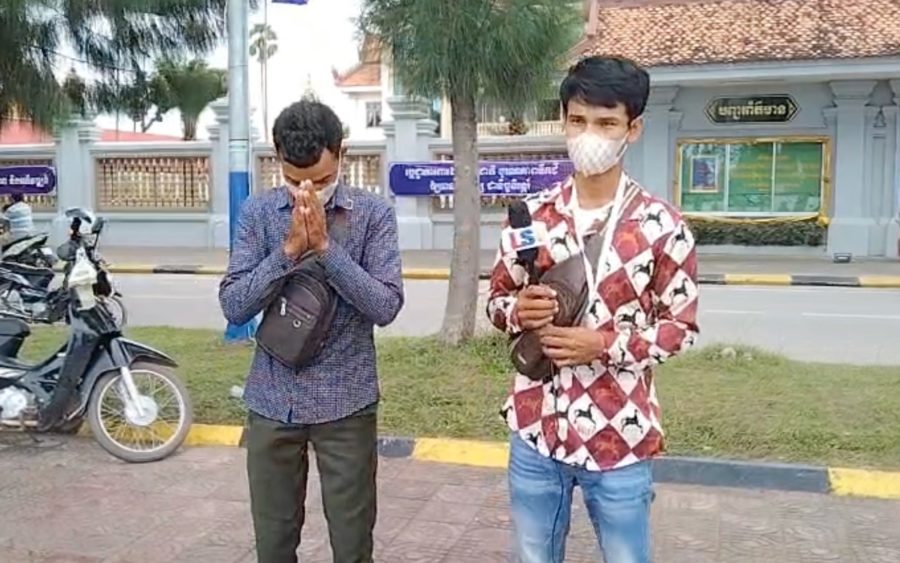 Two journalists from Los Seng News made a public apology on Wednesday after they were arrested for their coverage of a land dispute in Kampot. (LSN)

Two journalists arrested for covering a Kampot land protest were released on Thursday after being detained earlier this week, while three others who were part of the land dispute were released from detention.

Four residents of Chuuk district were arrested on Sunday for alleged violence against the owner of a property. The journalists, from Los Seng News, were arrested on Monday when protesters demanded the release of the four villagers, which included a 4-year-old child. The child was reunited with his family on Wednesday.

Kha Den Na, spokesperson for the Kampot prosecutor’s office, said five residents — two of whom are allegedly on the run — were charged for intentionally causing damage, incitement and for violence against the possessor of an immovable property.

“Regarding the case, the investigating judge decided not to detain them and released them,” Den Na said.

Kem Phoeun, the sister of one of the defendants, Sy Chroeun, confirmed he was released at 11 a.m. Thursday morning.

Los Seng News also confirmed that their journalists, Say Sophea and Ing Thoeun, were released late Thursday afternoon. The two journalists were allowed to make a public apology on Wednesday morning but then swiftly sent them to court for further questioning.