A week after a riverbank collapsed in Kandal’s Takhmao city, nearly 70 families are still living on the sidewalk next to the water as they plead with authorities to expedite the building of temporary shelters for them.

At least seven homes fell into the water on January 17 as floodwaters raged through a small stream, forcing the evacuation of another 70 homes.

Those affected were told to live along the sidewalk next to the stream, where they have been sleeping on wooden beds and have put up tarps over themselves to block out the sun and rain.

Thong Vichet Sary, 37, who has been living in Prek Tey village since she was born, is among those forced to live on the street after her wooden house collapsed into the stream last week. She has no toilet or water, she said, and fears for her family’s safety — especially her two small children.

She said the authorities are building 5 by 5 meter rooms made of corrugated metal on a plot of land about 300 meters north of the creek to serve as temporary housing. Sary called on the authorities to speed up the building of houses.

“I want to go as soon as possible because I have kids. Living on the road is extremely dangerous,” she said. “If I move there, it will be easier because the authorities have provided toilets, electricity, and water, and it is safer than living on the road.” 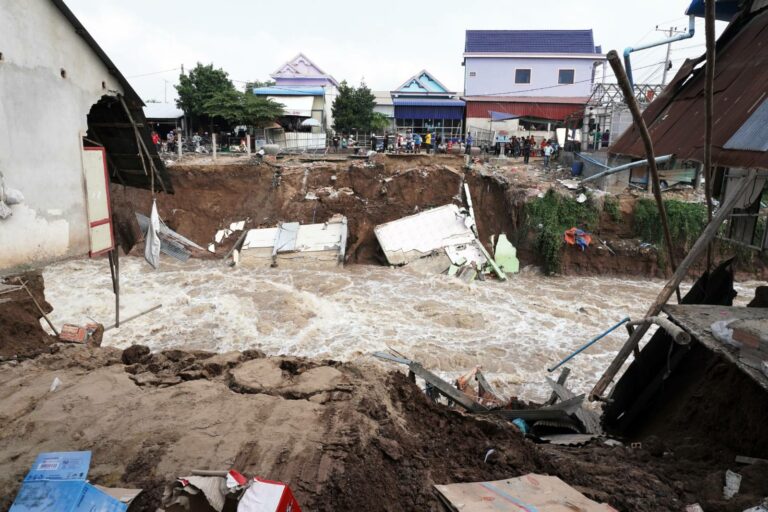 Floodwaters raged through a small stream in Kandal’s Takhmao city on Tuesday as at least seven homes collapsed into the waters and another 70 homes were evacuated.

Most of the evacuated families have no other land or place to live until the temporary housing is completed. Sary also requested that the government look into offering land or other forms of assistance to the landslide victims because they are all in need.

“I would like to ask the government to provide some land and a budget,” she said. She is also under pressure to repay a loan. “I want the bank to understand and delay the payment.”

Chhuny Seakly, 29, whose home was also among the seven that collapsed, also pleaded with the government to offer plots to recently landless families.

Nov Peng Chandara, spokesperson for the Kandal Provincial Hall, could not say when exactly the temporary shelter would be finished but said he hoped it would be within the next few weeks.

“This arrangement is temporary. We are preparing a place where they can live with water, electricity, sanitation, and comfort. Because they live there [along the sidewalk], it is not safe,” he said. Although there haven’t been more landslides in the past week, people must move farther from the stream out of precaution, he said, as officials fear the land will keep crumbling if it rains heavily.

Chandara said the Kandal governor is considering providing land to the victims of the landslide, but no decision has been made yet.

“To determine whether any land can be offered, the governor of Kandal province is studying and considering the issue of providing land to the victim, and will also request a decision from the head of government,” he said.

Kong Sophorn, the governor of Kandal province, told VOD that the provincial administration is researching potential locations to provide land to the victims.

“Our country is developing, so lots of land belongs to someone already, that’s why we are discussing this issue and can find a solution soon,” Sophorn said.

Nearly 80 temporary shelters will ultimately be built near the stream, he said.

The Ministry of Meteorology posted on Tuesday that the country will experience cooler weather over the next seven days and windy conditions along the coast.