Kandal Village Locked Down, 6,000 in the Province Quarantined 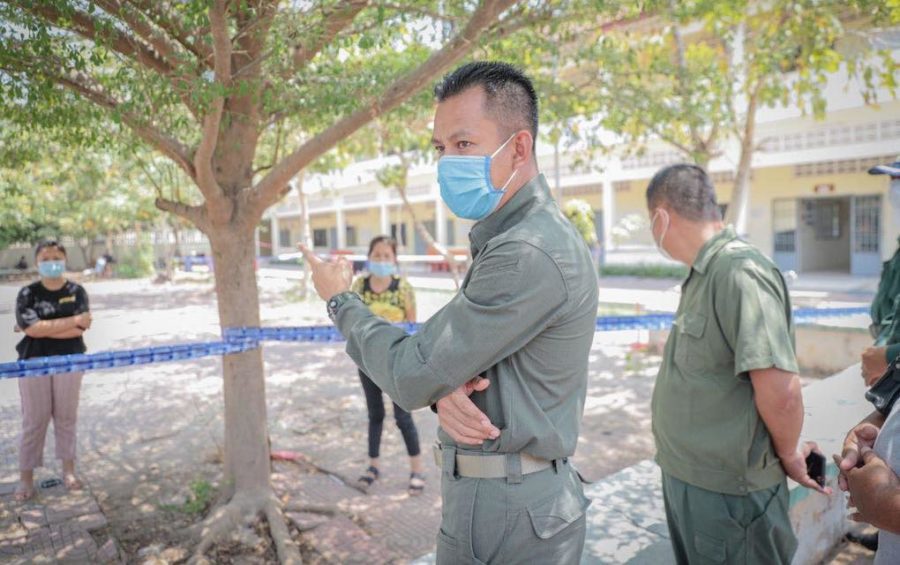 The “February 20” Covid-19 outbreak is fanning out in the provinces, with a village of 300 households in Kandal province locked down, schools closed in parts of Siem Reap and Prey Veng, and parties, weddings and other gatherings suspended in Kampong Speu.

Arrivals to Siem Reap from Covid-19 hotspots like Phnom Penh and the provinces of Preah Sihanouk and Prey Veng would need to be tested and quarantined, its provincial governor said.

Kandal governor Kong Sophoan said on Wednesday that 6,000 people in the province had been placed in quarantine, after the Health Ministry in the morning announced 30 new Covid-19 cases in Kandal.

Mi Na, police chief in Lvea Em district’s Peam Oknha Ong commune, said 300 households in Veal Thom village had been put under lockdown, with residents not allowed to leave while doctors took all their samples.

Authorities were also tracing contacts to nearby villages, Na said.

The cluster of cases in the village — nine of the 30 Kandal cases announced on Wednesday were Cambodians in the commune — was linked to a family who visited a doctor in Prey Veng province who had tested positive for Covid-19, Na said.

“A grandmother and mother took her child to get treatment,” he said. “They stayed for three days at his clinic.”

They were asked to quarantine after the doctor’s infection came to light, but relatives had visited to drink at the house, he added.

Prey Veng deputy governor Chan Tha said 261 locals had been tested for contact with the doctor. From whom or where the doctor contracted Covid-19 was still unclear, but the case was nevertheless part of the February 20 cluster, Tha said. He added that schools were being shuttered until further notice.

“It’s quiet in the commune, and some vendors don’t dare to come out to sell their goods, like noodle sellers. And people don’t come out to buy it because people are scared,” Chea said.

According to documents issued by the Kampong Speu provincial administration, wedding parties and other gatherings have been suspended there from Wednesday until further notice.

A market vendor who normally sells at Phnom Penh’s Olympic Market had sold clothes at a local market in Kampong Speu’s Odong district on March 6 from 1 to 4 p.m. She had tested positive for Covid-19 and was being treated at the Great Duke hotel in Phnom Penh, it said.

Nearby clothing stalls had been closed, and sellers were being tested and quarantined, it added.

In Siem Reap, 19 schools were being closed in Puok district after a woman who works in Sihanoukville traveled to the province on March 6 and tested positive for Covid-19, according to statements by the district education office and provincial administration.

The woman had stayed with her family and attended a wedding ceremony without a mask, the provincial administration added.

In an audio message, provincial governor Tea Seiha called on the armed forces to check people entering Siem Reap, including from Kampong Thom province in the east and Battambang province to the southwest. They should also check arrivals on water via the Tonle Sap lake, he said.

“In short, there are six entry points that we need to station to check and monitor and record data as much as possible without closing them,” Seiha said. “It is necessary to take measures to prevent and be alert to the risks.”

People coming from hotspots like Phnom Penh, Preah Sihanouk and Prey Veng would need to be tested and quarantined, he added.

Meanwhile, Preah Sihanouk provincial spokesperson Kheang Phearum said on Tuesday that authorities had arrested a Chinese woman who had attempted to escape quarantine by traveling on the back of a truck.

She was caught by police checking entries and exits from the province, and would be deported after a 14-day quarantine, Phearum said.