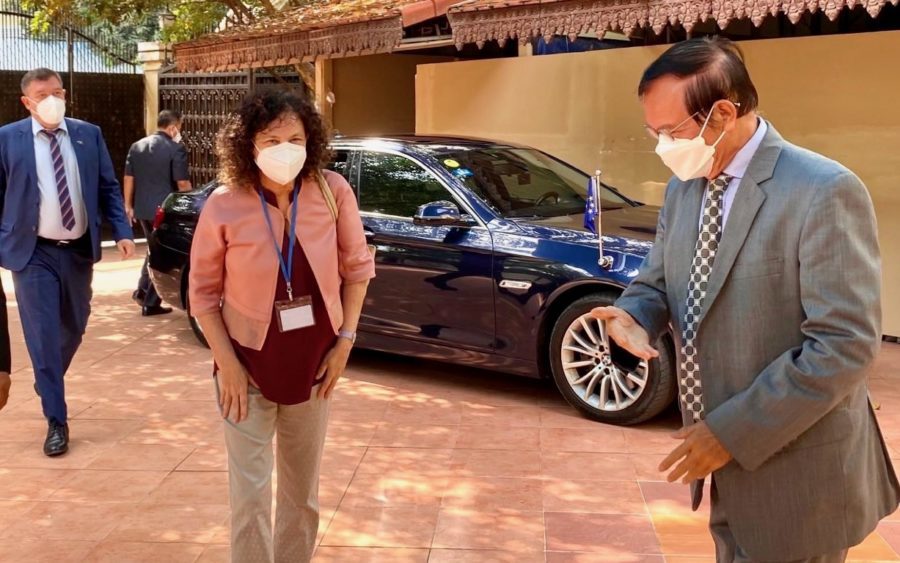 CNRP leader Kem Sokha meets the head of the E.U. Delegation to Cambodia at his residence on February 10, 2022. (Kem Sokha’s Facebook page)

Tensions between prosecution and defense consumed most of Wednesday’s trial hearing of opposition leader Kem Sokha’s treason case, as each side accused the other of trying to delay the trial process.

All showed Sokha speaking during visits to see supporters in Prey Veng, Takeo, Banteay Meanchey and Phnom Penh, mostly from 2014.

In the clips, Sokha explains the merger between his Human Rights Party and the Sam Rainsy Party to form the CNRP, and encourages people to register and vote and refrain from violence.

As Sokha’s lawyers defended their evidence, prosecutors and government lawyers interrupted and questioned errors in transcriptions and other points.

Defense lawyer Chan Chen said of a clip shown Wednesday, in which Sokha talks about the party merger: “This merger came from Khmer, not from foreigners. … The important thing is to let Cambodian people go to vote, and this is a gift. Nothing besides the election.”

Government lawyer Ly Chantola stood up and pointed out spelling mistakes and extra words in the transcript. Defense lawyer Meng Sopheary said the meaning was the same despite some typos.

Deputy prosecutor Plang Sophal said discussion of the evidence should be pushed back to the next hearing, and if the defense stuck to the same version of the transcript, he would point it out in his concluding remarks and leave it to the judges whether to accept the evidence.

Deputy prosecutor Chhay Hong piled on. “I don’t know if it was intentional or not. The words have different meanings,” Hong said. “If the evidence has intentional mistakes, that evidence should be reviewed again.”

Judge Koy Sao tried to compromise, saying the defense could decide whether they felt they would be at a disadvantage by not correcting the mistakes.

Sokha’s lawyer Sopheary asked to make the corrections on the spot. Defense lawyer Ang Udom agreed, saying the debate was a waste of time.

Government lawyer Chantola and prosecutors Samang and Hong continued their criticism, however, leading judge Sao to remind all parties to avoid sarcastic words.

Later, after a showing a video of Sokha speaking at a Phnom Penh rally, the debate turned to whether the CNRP had received permission for the gathering, and what its role was.

Prosecutor Sophal repeated: “Did the accused participate as a demonstrator or as leader of the demonstration?”

Defense lawyer Sopheary said the discussion was straying from the charge of Sokha allegedly conspiring with a foreign power.

“I want to clarify about the crime. [The prosecution] accused my client of colluding with a foreign [country], but we cannot find any foreign [country]. Here [in court], there are also foreigners. Show me which foreigner,” Sopheary said. “He met with diplomats and not criminals.”

A later argument consisted of debating the exact date of a clip, as only the month and year were shown.

The trial is scheduled to continue on February 23.