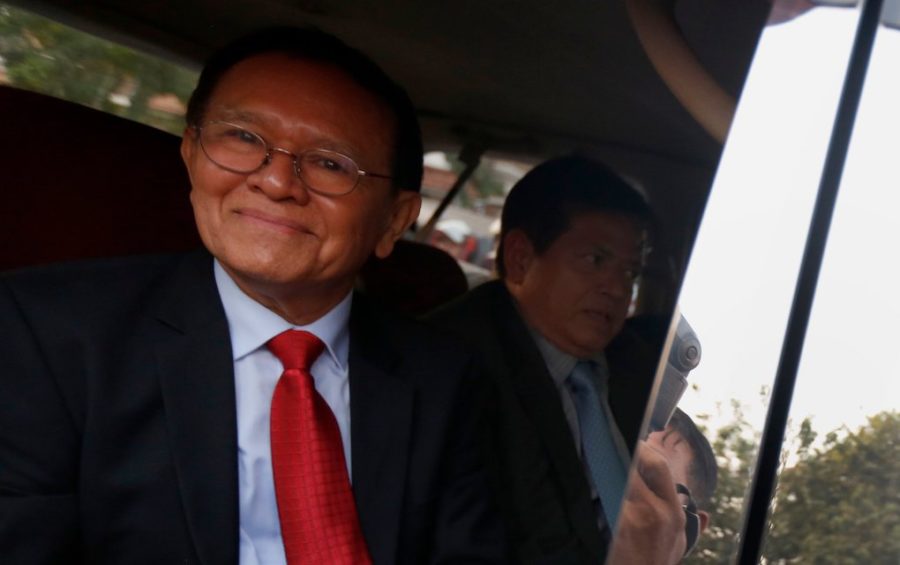 The first day of opposition leader Kem Sokha’s trial for treason begins at the Phnom Penh Municipal Court today, more than two years after his arrest. Journalists were denied passes to attend the hearings, though a Reuters reporter said “a few” were allowed in on the day.

As of midday, there were least 200 people gathered outside the court, including authorities, media and Sokha supporters. About 20 uniformed police officers are on the sidewalk on the court side of the street, with everyone else kept on the other side.

Judges questioned Kem Sokha during the afternoon hearing about his work at the Cambodian Center for Human Rights (CCHR) and the sources of his funding, his defense lawyers said after the day’s proceedings.

Meng Sopheary said Sokha was asked about his activities from 1993 to 2007, including in the last five years of that period when he temporarily left politics to found CCHR.

In a 2013 video the government has offered as evidence of Sokha conspiring with a foreign power, Sokha appears to say that he founded CCHR at the advice of the U.S. so he could build a grassroots movement and bring about political change.

Sopheary said Sokha had been asked about the funders of CCHR, in particular USAID, the U.S.’s development aid agency.

Asked what his reply was, Sopheary would only say that he had done nothing wrong.

Pheng Heng, another of Sokha’s lawyers, refused to disclose the questions and responses in detail — despite it being a public trial — “because there has been no judgment yet.”

Journalists and human rights monitors have been barred from attending the trial, with the Justice Ministry claiming there was a lack of space and equipment. Foreign embassy officials have taken most of the seats made available in the courtroom.

After the conclusion of the first day’s hearings, government lawyer Ky Tech said that the judge had agreed to his request that nations, organizations and foreigners implicated in the Sokha case not be identified by name in the verdict.

However, he said the judge had also decided — against his request — that internal court documents, which are not revealed publicly, would use real names for all parties involved.

Earlier in the day, Tech had told reporters that he had asked the court to use Khmer characters instead of full names to identify the parties involved in order to ensure “good relations” between Cambodia and other nations.

“The aim of using the characters is to keep good relations and cooperation between the Cambodian government and some other countries that are related to this case,” Tech said.

“The main goal is that we don’t want to have differences as well as seeing each other as enemies, because of using names in this case,” he added.

Tech said the nations involved in the case, which would be assigned a Khmer character in the verdict, were: Indonesia, Yugoslavia, Serbia, Australia, the U.S., Canada, Taiwan and India, as well as the E.U.

Asked his thoughts about the defense lawyers’ request for the court to broadcast the proceedings live to the public and media, Tech said he wanted the media to know what was happening during the trial.

“That’s why I am taking time [to speak with reporters]. Even though I’m tired through the hearing, I still come to share information to reporters because our reporters have not observed directly,” he said.

Yet Tech declined to comment when asked a number of questions, citing their potential to influence the trial and affect the rights of the accused.

The government lawyer didn’t answer questions about what questions he had asked in court so far, what kind of support alleged conspiring nations provided to Sokha and whether nationals from the implicated countries would be called for questioning.

Tech also said that despite Sokha’s claims of innocence, the government’s lawyers had two big suitcases and multiple carry-on bags full of evidence to show the judges Sokha’s “mistake.”

Tech denied the case was a political one.

“If it is a political matter, the court will not have authority,” he said.

The first day of Kem Sokha’s treason trial has wrapped up, with lawyers from both sides — Sokha and the government — saying the court mostly dealt with procedural questions for future hearings.

The trial is scheduled to continue in the morning on Thursday.

Pheng Heng, one of Sokha’s defense lawyers, told VOD on Wednesday afternoon during a break in the proceedings that the morning hearing focused on the main evidence put forward against Sokha: a video recording of a 2013 speech in Australia in which he says he has received support from the U.S. since he entered politics in 1993.

During the proceedings, the courtroom was shown a short version of the video provided by the prosecutor, which was about two to three minutes long, said Heng, still in his black lawyer’s robes while speaking with reporters across the street from the courthouse.

According to a government transcript of the speech, Sokha says in the video that he has been supported by the U.S. since he entered politics in 1993 and was recently advised to pursue grassroots support in the model of the 2000 overthrow of Yugoslavian dictator Slobodan Milosevic.

Sokha’s four-attorney defense team requested that the court play the full video of Sokha’s speech, which is more than an hour long, Heng said.

The judge said the lawyers would need to submit a formal request to the court about the video before Monday, according to Heng.

“We need to play our full video,” he said.

During the hearing, a government lawyer also requested that parties implicated in the alleged treason case, such as people, states and NGOs, not be identified by name. He suggested parties instead be assigned a letter to refer to them, Heng told VOD.

The judge had not yet decided on the request to keep accused parties anonymous, nor on whether the full video of Sokha’s speech would be shown in court, he said.

Pulling away from the courthouse at about 12:10 p.m., Kem Sokha waved from the middle backseat of a green SUV while journalists chased the car to get a photo.

Chin Vanna, 59, a Phnom Penh resident and CNRP supporter, said she was standing across the street from the courthouse to observe the court process.

“I feel that he is innocent and I as a Cambodian citizen want to call on the government to release him,” Vanna said.

The charge is “not right since he has not committed any wrongdoing.”

“I will keep supporting the CNRP forever,” she added. “If the court doesn’t release him, the people will lose faith in the court.”

Sokha issued a statement on Facebook late in the morning via his adviser Muth Chantha, denying the charge against him and saying all his political activities were focused on democracy and free elections.

He is charged with conspiracy with a foreign power, which could put him in jail for 30 years.

“I did NOT bring in foreign states or foreign agents to conduct hostility or invasion against the Kingdom of Cambodia,” the statement said.

Sokha demanded that the court drop the charge against him, and thanked Cambodians, embassies, NGOs and the media for monitoring the trial that is currently underway.

“It’s a kind of threat against the people,” Hong told VOD. “Deploying armed forces like this is unacceptable.”

“We have been liberated from war, we have democracy, we have the Paris Peace Accords, so the government should change everything happening in Cambodia now,” he said.

The treason charge against Sokha is “not right,” Hong added.

Hong said Sokha’s detention has gone from prison to house arrest to reduced court restrictions, with the lessening restrictions showing that he is not guilty.

“So if the court sentences him and finds him guilty it means that it is a remotely-controlled court,” Hong said.

If Sokha is not found guilty, he expects a political compromise may resolve the case, he said.

Meach Sovannara, a former senior official for the dissolved CNRP, told reporters outside the Phnom Penh Municipal Court that the proceedings happening inside the courtroom were only part of the politics surrounding the case.

“There will only be a political solution,” Sovannara said, calling the trial “a kind of contest in negotiations about the EBA.”

The E.U. is reviewing duty-free trade with Cambodia under the “Everything But Arms” (EBA) scheme over political and human rights concerns, with its decision due next month.

Sovannara said he had met with officials from the E.U., Japan and Germany late last year, and while they didn’t force conditions on Cambodia, “They want to see one potential opposition party in existence.”

“We really want the CNRP to be reinstated … but [the government] wants to dissolve the CNRP because they are afraid of losing the election,” he said.

He said he would join a new political party only if CNRP co-founders Sokha and Sam Rainsy asked him to.

“I have to wait for Kem Sokha first. And if Kem Sokha or Sam Rainsy tells us to start a new party” we would do it. Otherwise, he said, people won’t support the new party.

If Cambodian voters love a politician, like Rainsy or Sokha, they love them forever, he said.

“These two leaders, if they separate, it won’t be successful” for the opposition, he said.

Speaking across the street from the court, Prince Sisowath Thomico said it was “regrettable” that the court did not allow him and four other senior leaders of the dissolved CNRP to observe the trial, after they had made a request to watch the proceedings along with two legal assistants.

Since the CNRP was dissolved, he said, “We’re just regular citizens. We should be allowed to come in.”

Court officials had told CNRP lawyers that the former leadership of the CNRP would not be allowed to observe the proceedings, he added.

“This is part of the culture of this regime” to discriminate against people, Thomico said.

If the trial was fair, the court would invite others who were accused alongside Kem Sokha to appear in court, Thomico said.

He said the as far as he knew, U.S. democracy-building organization the International Republican Institute (IRI), which was implicated in the alleged color revolutionary plot to overthrow the government, has not been summoned to court.

A Toyota SUV was seen leaving Kem Sokha house by VOD at about 7:20 a.m. while press corps gathered across the street of the courthouse and security forces and police lined the front of the building and armed authorities were seen down the street.

Reporters who registered to observe the trial have so far not been allowed in. A metal detector, which is not usually in place, was also seen at the front of the courthouse.

At about 7:35 a.m. Kem Sokha walked into the courthouse, flanked by about a half dozen people.

Correction (1:42 p.m.): Reuters reports that ‘a few’ journalists were allowed into the courtroom.