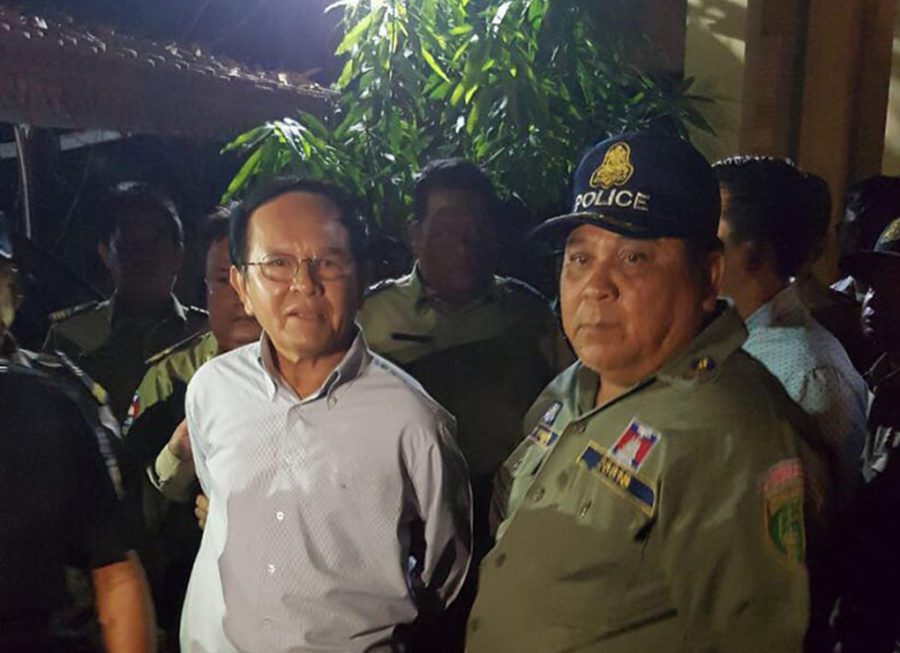 Kem Sokha was arrested at his house in Phnom Penh in September 2017.

The Phnom Penh Municipal Court has rejected a request from lawyers for opposition leader Kem Sokha to release him from the terms of a strict house arrest order he has been forced to live under since his release from maximum security prison last year.

The court’s decision came the same day as Prime Minister Hun Sen threatened never to release Sokha, who has been detained without trial on charges of “treason” for 18 months. He spent the first 12 months in the Tra Paing Phlong prison in Tbong Khmum province, before being put under house arrest in Phnom Penh in September.

Pheng Heng, a lawyer for the leader of the dissolved Cambodia National Rescue Party (CNRP), said on Tuesday that requests to release his client had been turned down.

“Yesterday, we received a letter from the Phnom Penh Municipal Court denying our request to drop the charges against Kem Sokha,” Heng said, describing the extensions to Sokha’s pre-trial detention as excessive. “Owing to the judicial investigation already taking more than a year, we had decided to ask the court to drop the charges.”

Sokha was arrested at his home in September 2017 after accusations from Hun Sen’s government that he was conspiring with the U.S. to overthrow the government. Since being placed under house arrest last year, Sokha has been under judicial supervision and banned from contacting any foreigners, the media or other opposition officials.

Speaking during a university graduation ceremony in Phnom Penh, Hun Sen on Monday threatened to never release Sokha from house arrest if the CNRP leader instructed his officials not to apply to the Interior Ministry for the reinstatement of their political rights, which were rescinded during a pre-election crackdown in 2017.

“Someone is still under house arrest but warns others not to apply for political rights,” Hun Sen said. “Just wait until you are released. I won’t let you be released. When the courts sentence you, don’t be troubled. No prisoner can curse others for treachery, for selling themselves, selling their conscience or anything — or smear his colleagues.”

The Supreme Court released an order banning 118 of the CNRP’s top leaders from any political activities for five years on the same day that it dissolved the opposition party in November 2017 for reputedly conspiring with the U.S. to overthrow the government.

But in a move to soften its image following the July 2018 national election, the CPP government last year announced that those officials could apply to the Interior Minister to have their political rights reinstated. The CNRP’s top leaders instructed banned CNRP officials not to comply — on the grounds that doing so would be tantamount to collaborating with a repressive regime — but a group of nine decided to so anyway.

Heng, the defense lawyer for Sokha, said that his client had every right to make comments if he wished while in the legally dubious position of a house arrest order.

“In regards to the opinion and comments from another person saying that he is banned or not banned, it’s not correct, as he is serving out his duties based on the investigating judge’s orders,” Heng said, adding Sokha had in any case not made such comments.

“As his lawyer, I meet with him regularly and have never heard that he has prevented or told others not to apply for their political rights,” he said. “He never made comments preventing [officials requesting their rights] or made comments telling them to do it.”

Hun Sen’s desire for banned CNRP officials to request their political rights back has been interpreted as a way to help stop the European Union (EU) canceling Cambodia’s access to the lucrative Everything But Arms (EBA) tariff-free scheme in the wake of last year’s election, in which an opposition-less CPP won 125 out of 125 Assembly seats.

On Feb. 11, the EU initiated a review process that could in 18 months lead to the rescinding of Cambodia’s access to the EBA scheme. A delegation of EU officials also paid their first visit to the country last week to begin their decision-making process.

Hun Sen warned that banned CNRP officials who take part in political activities without their rights being reinstated by the Interior Ministry would be forcibly stopped by authorities, whom he instructed to take a “see one, beat one” approach to the banned politicians.

Mu Sochua, a former CNRP lawmaker and one of the 118 officials banned from political activities by the Supreme Court in November 2017, said the relatively meager amount of former CNRP lawmakers who had broken with the party leadership worried Hun Sen.

“It was a small number, so it made him hopeless and panicked,” Sochua said. “Second, he does not care about the national interest because at the present time the European community has given him an ultimatum to restore democracy but he does not care.”

“He always threatens, always warns, and only destroys.”

Lao Mong Hay, a political analyst who served as an adviser to Sokha when he was the vice president of the National Assembly, said Hun Sen’s threats against the opposition leader were intended to encourage more CNRP officials to apply for “rehabilitation” to make the government look better as it battles to prevent losing access to the EBA.

Yet he said Hun Sen could not carry through on his threats to keep Sokha under house arrest indefinitely, especially as the deadline for the EBA withdrawal process nears.

“Anyone who’s an obstacle for them applying for their political rights will be targets of the threats and continuing crackdown,” Mong Hay said. “But I think [Sokha’s release] could happen if the European community enact the EBA trade preference sanctions.”

The Justice Ministry issued a statement earlier this month saying that Sokha could be kept under effective house arrest at his home in Phnom Penh without trial indefinitely.