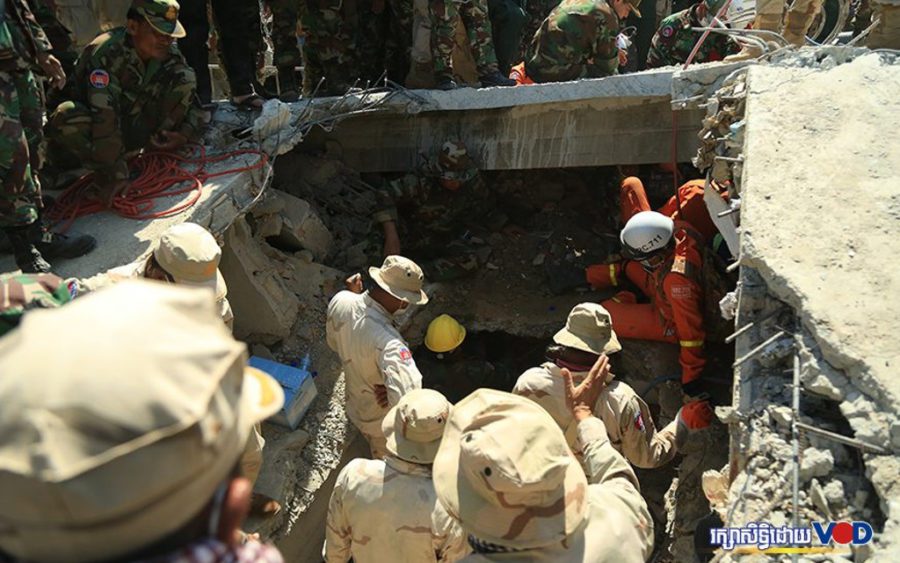 Rescuers search for people under the debris of a collapsed building in Kep province on January 3, 2020. (Chorn Chanren/VOD)

A land management officer in Kep province said the seven-story building that collapsed on Friday, killing 36 and injuring 23 others, had started construction without a license and had only been permitted to build up to six stories.

When asked why the department had not held the developers accountable sooner, the official skirted the question, saying a colleague had facilitated the permit, and it was signed off by the provincial governor.

The building’s owners, Ek Sarun and his wife Chhiv Sothy, have been provisionally charged by the provincial police with manslaughter, according to provincial police chief Ben Dara. An attorney suggested that local officials in charge of inspecting the site should share responsibility in the criminal case.

Lay Vannara, deputy director in charge of administration at the provincial department of land management, told VOD on Monday that the building had begun construction in March last year, but did not receive a permit until August 2.

The permit was for a six-story building, Vannara said.

“The construction permit was signed by the provincial governor,” Vannara added.

Prime Minister Hun Sen has rejected calls to fire the governor over the deaths. “This is not the time to have disputes with each other, but it is a time for Khmer to help Khmer,” Hun Sen said, according to CamboJA News. He also announced $50,000 in compensation to each of the families of the deceased.

Sok Sam Oeun, an attorney and independent legal expert, said officials should share in the responsibility of the collapse for their failure to enforce a safe construction.

He said the government and its Anti-Corruption Unit needed to thoroughly investigate the case and find justice for the victims.