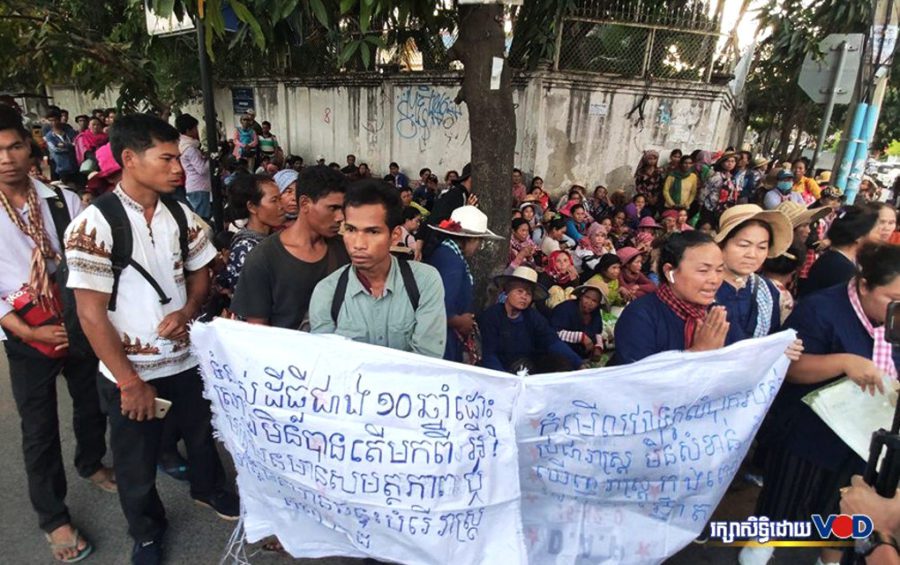 Villagers from three districts in Koh Kong province protest in front of the Land Management Ministry in Phnom Penh on November 25, 2019 to demand a solution to their land dispute. (Panha Chhorpoan/VOD)

More than 300 people from Koh Kong province protested in Phnom Penh on Monday over more-than-decadelong land disputes with companies that were granted concessions by the government, and that demonstrators say pushed them off their plots.

Saing Puy said she represented 26 families from Kiri Sakor and Botum Sakor districts who were engaged in disputes with Union Development Group (UDG) for 10 years, after the Chinese company had encroached on 432.7 hectares claimed by villagers.

Puy said people had lived on the disputed land since 1979, and had proper land ownership certification from local authorities.

Villagers had sought intervention from officials many times but there has been no resolution, she said.

“The solution is to give us a new place to live because they took all of our land, and how much is the compensation for us?” Puy told VOD.

“We want to resolve it directly with the company because the company took our land to develop and continued to sell it for profit. Why can’t they find a solution for people who just asked for a living? Why do they have to put pressure on their own people?” she said.

Officials from the ministries of interior and land management could not be reached for comment.

In 2008, the government granted 36,000 hectares of concessional land in Kiri Sakor and Botum Sakor to UDG for commercial development and a massive resort, which some have posited could host a Chinese military installation. Cambodian officials have denied the claims. UDG received a further 9,100 hectares in 2011.

UDG’s concession forced 1,143 families to abandon more than 10,000 hectares of land and 1,500 houses were dismantled and cleared, according to a 2012 report from the Community Legal Education Center.

On Monday, In Thou said she represented 197 families from Sre Ambel district who were the victims of a land grab by Heng Huy Agriculture Group in 2007.

The sugar company had threatened and cleared villagers’ crops, including mango, jackfruit, cashews, corn and rice, without giving compensation, despite the villagers owning and farming the land since at least 1995, Thou claimed.

Thou said villagers demanded the government intervene and offer 421 hectares of land controlled by the company to disputants and compensate each family with $7,000.

“Authorities promised to find a solution for me but they did not come to meet us. They made an empty promise,” she said. “If they still don’t find a solution for us, we will still go to protest in Phnom Penh because we lost land because of encroachment by the Heng Huy company.”

Land disputants from her area also protested in the capital in July and August.

Koh Kong deputy governor Sok Sothy told VOD that at the provincial government level it was beyond his ability to resolve the land disputes between locals and UDG, and oknha Heng Huy, adding that the cases should be resolved in court.

“For those who are involved in disputes with UDG, the government had already invalidated [their land titles] so if they want a solution, only if the government issues a directive to the sub-national level to handle it, then we will handle it,” Sothy said.

For those in dispute with Heng Huy, he said the conflict involved land-title holders, so was under the court’s jurisdiction.

Pen Vuthea, a monitor with human rights group Licadho in Koh Kong, said authorities had no intention to solve the disputes and that the resolution mechanism was slow and wasted people’s time.

“As the authorities who provided the economic land concession to the company, they have to take responsibility and find a quick solution to end the case,” Vuthea said.

For the 197 families opposing Heng Huy’s claims, he said, “they just filed their complaints but [the authorities] need to clearly inspect, otherwise they will still protest without a solution.”

“If it is still like this, it is not a good thing for the authorities because it affects the government’s image,” he added.