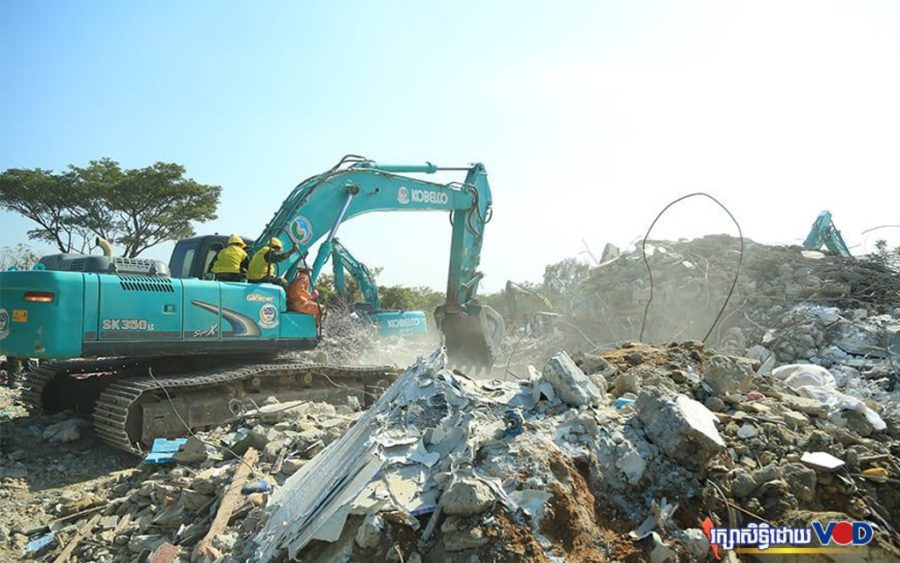 Rescuers search for victims under the debris of a collapsed building in Kep province on January 3, 2020. (Chorn Chanren/VOD)

Officials from the national down to the local level should face an investigation into possible collusion and noncompliance in issuing and enforcing building permits, labor groups urged in a press conference on Wednesday.

The call came after 36 people were killed in a building collapse in Kep province last week, an incident Prime Minister Hun Sen dubbed a national tragedy. It followed a similar collapse in Sihanoukville in June that killed 28, and another in Siem Reap province in December that killed three.

Construction of the Kep building had begun without a permit and it rose to seven stories despite approval for just six stories, according to a local official.

“We need an investigation,” Tharo said. Officials should be scrutinized over whether they have “complied with the law or not and whether they were involved in collusion in issuing construction licenses.”

“The important thing is that the government must have the will to enforce the law from the national level down to the subnational level, and it must take strict legal action against officials,” he said.

Sok Kin, president of the Building and Wood Workers Trade Union, said buildings had fallen and people had died because of inadequate work done by inspectors from the Land Management and Labor ministries.

“Whether they have been effective or not, we have witnessed together,” Kin said.

The owners of the collapsed Kep building, Ek Sarun and Chhiv Sothy, were released on bail on Monday after being charged with manslaughter and causing involuntary bodily harm.

Hun Sen, who visited the site of the rescue efforts over the weekend, said provincial leaders would not be fired in the wake of the collapse.