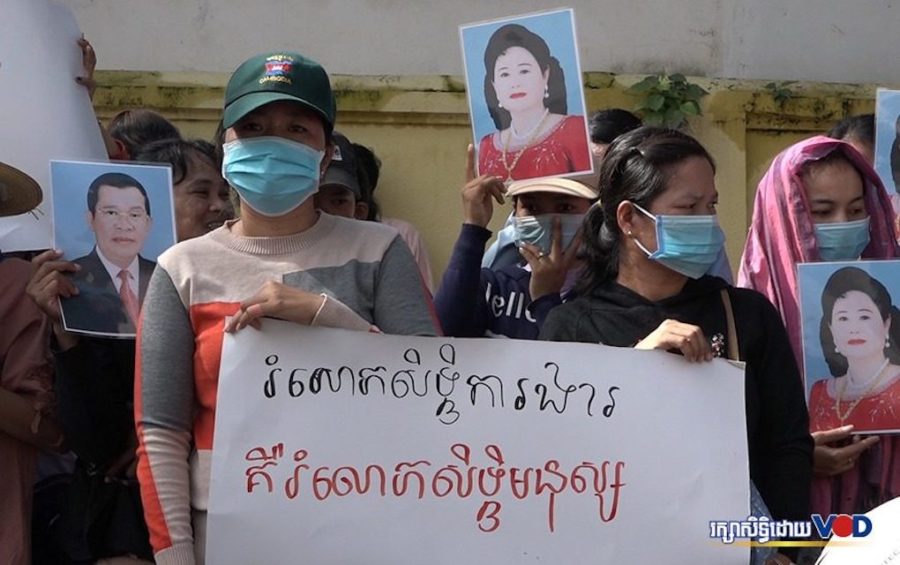 Workers protest in front of the E.U. office in Phnom Penh on September 7, 2020. (Hy Chhay/VOD)

Thousands of workers took to the streets in multiple protests this week over unpaid wages from suspended factories as well as grievances related to benefits, as the Labor Ministry issued a warning against one unionist alleging an illegal strike and a man was detained while photographing a rally.

In the biggest protest, more than 4,000 workers blocked Phnom Penh’s Street 217 on Thursday morning over a dispute with the Chinese-owned Y&W Garment in Dangkao district, according to Spean Thma commune police chief Chhim Ra.

The road was blocked for more than an hour as workers demanded time off over the Pchum Ben holidays next week and made other appeals, Ra said on Friday.

“The protest has now ended,” he added. “Both sides reached an agreement and the workers agreed to return to work as normal.”

In Takeo province, almost 900 workers at Chinese-owned Hong Sen Textile began a protest on Wednesday, claiming their employers ran away after suspending operations and had not paid them.

Nop Sokha, who has worked at the factory for seven years, said the factory owed each worker between $200 and $250. “They do no not pay, but we have expenses,” Sokha said.

The factory’s head of administration, Tang Heng, said he was also owed more than $6,000. “I have not seen [the boss]. We tried to contact him but could not reach him. So we consider him to have run away,” Heng said.

An official at the Takeo department of labor could not be reached for comment.

Meanwhile, about 250 workers from Chinese-owned Sepia Garment in the capital’s Pur Senchey district protested outside the Labor Ministry on Friday.

“He has disappeared from the factory for more than two months. … The administrators of the factory said he had resigned,” she said.

According to the Garment Manufacturers Association in Cambodia, more than 400 factories have suspended operations amid the coronavirus pandemic, which has caused a worldwide shortfall in demand. More than 150,000 workers’ jobs have been affected by the closures, the association has said.

But on Tuesday, Leakhena received a warning letter from the Labor Ministry “that I was the one who had led an illegal strike,” she told VOD. The factory has since suspended her.

“The Arbitration Council has asked me to be quiet and wait to be summoned for a meeting,” she said, adding that the factory’s other employees had now returned to work.

Cambodian Labor Confederation president Ath Thorn said he was aware of protests by workers from five different factories this week as the industry remained in crisis.

“Factories are continuing to suspend their operations and are closing down,” Thorn said. “When the suspending or closing of the factories isn’t handled properly, workers’ protests will pop up everywhere.”

In Banteay Meanchey province on Thursday, about 30 Cambodian vendors with shops across the border in Thailand staged a protest calling for the border’s reopening. Trucks have been allowed through the border, but vendors and cart-pushers still cannot cross due to coronavirus concerns.

Din Puthy, head of the Cambodia Informal Economy Reinforced Association, said a 26-year-old man, Sim Vannak, had been detained for photographing the protest and posting the images on Facebook. Puthy’s two mobile phones were also confiscated, he said.

“Which law says that filming in public is illegal?” Puthy asked. “It is extremely unfair.”

Earlier this week, Labor Ministry spokesperson Heng Sour said the government was doing what it could to support workers during a difficult time for several industries.

“The Covid-19 pandemic disturbs everybody’s income, lifestyle and working condition,” he said in a message. “The government is acknowledging the impact and designs the intervention policy for those who are hard hit.”