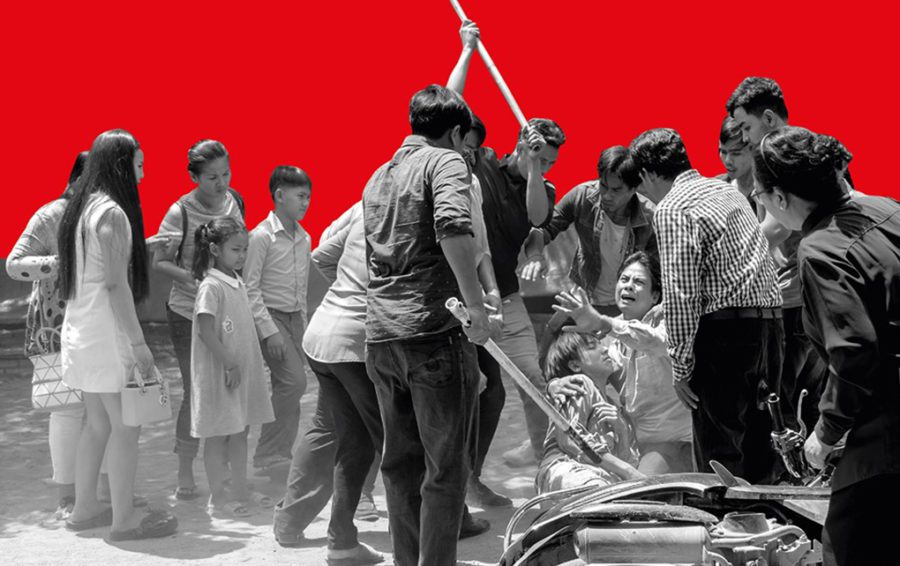 A lack of trust in the police and courts, scapegoating of “sorcerers” for social and physical ills, and a firm belief that violent actions were justified were among the reasons perpetrators of “popular justice” attacks in Cambodia took the law into their own hands, said a U.N. report released on Thursday.

The report from the Office of the U.N. High Commissioner for Human Rights (OHCHR) highlights the declining, although concerning phenomenon of individuals meting out punishment outside the legal system, usually violently and “often in retaliation to an alleged crime” or “sometimes in response to a perceived threat.”

Titled “People’s Court: Preventing and responding to ‘popular justice’ in Cambodia,” the report focuses on cases of mob violence in which perpetrators may attack victims over a range of alleged crimes or perceived wrongdoings, from petty robbery or causing a car or motorbike accident to rape or murder.

OHCHR also spotlights mob attacks against individuals accused of witchcraft and targeted with violence after being blamed for causing people’s health problems or other hardships.

“‘Popular justice’ in Cambodia, as in other countries around the world, thrives on long existing prejudices, accumulated tensions and frustration, based on a lack of trust in the rule of law and the justice system, discriminatory attitudes in society, poverty, and lack of education, in particular human rights education,” the report says.

While the number of documented cases of mob violence decreased since 2005, “popular justice” killings remain “an area of concern,” according to the report.

At a panel to launch the report in Phnom Penh, Justice Ministry spokesman Chin Malin said the government was working hard to address mob violence, which he called a “social sickness,” while acknowledging that law enforcement was “not yet comprehensive and complete.

“We need to make sure the people responsible for these attacks are held liable,” Malin said. “Killing people on the street is unacceptable.”

While some offenders were prosecuted, he said some could not be due to the difficulty of identifying individuals participating in a mob attack.

Malin also warned against “political messages” that incite poor people to hate the rich or workers to hate employers. He said in situations of mob attacks arising after traffic accidents, the public often receives the message that people who own expensive cars are “always against the poor” without first determining who actually violated the traffic law or was to blame for the accident.

Overall, he said “popular justice” attacks were not a new phenomenon.

In the report, OHCHR identified 73 cases of popular justice from 2010 to 2018, with 57 resulting in the killing of someone following accusations of social misconduct, theft or another infraction.

For example, 22 deaths were related to traffic accidents and 35 killings followed accusations of practicing witchcraft.

However, no official comprehensive data on popular justice cases is available, so the actual figures are likely much higher, OHCHR said.

Documented victims of mob killings and beatings were all male and most often people who were accused of theft. Perpetrators are often bystanders to a criminal incident, mostly young men.

Factors contributing to the attacks include a lack of trust in the legal system and that authorities will provide an adequate form of justice, perceptions of corruption and views that the police and courts “did not operate as a public service,” the report says.

Soeng Senkaruna, spokesman for human rights group Adhoc, agreed that people lacked trust in the judicial system. He encouraged authorities to investigate cases so that the public saw that justice was being done.

Police were able to arrest and prosecute some offenders, but not all, said Inn Bora, deputy commissioner general of the National Police.

“For some crimes, we were too late to arrive at the scene,” Bora said. “We continue to investigate to ensure that those offenders are not left at large.”

For mob attacks stemming from accusations of witchcraft, OHCHR found that the allegations often begin with a rumor in which people attribute disease, misfortune or death as the result of the supernatural. Traditional healers “may explain the problem as caused by malevolent spirits or humans (sorcerers),” according to the report. The healers may then vaguely identify the alleged culprit with a physical description or indication of where they live.

“Once someone is identified as a sorcerer, rumors about his or her alleged specific bad actions become viral,” the report says. Often, the accused witch is first ostracized from their village, but a small incident can explode into widespread communal violence, with perpetrators attacking victims with sticks, knives, machetes or guns.

“Some victims have been found beheaded,” OHCHR said.

OHCHR documented 49 cases of violence related to allegations of witchcraft or practicing “black magic” from 2012 to 2018, including 35 involving killing and 14 involving attempted killings or harassment.

A strongly held view among “popular justice” perpetrators that their actions are “fully justified and legitimate” is the main obstacle preventing authorities from stopping people from taking the law into their own hands, the report says.

Judicial authorities still fail to take action that leads to perpetrators being brought to justice, thus sustained efforts are needed to uphold the rule of law, protect victims and hold perpetrators accountable, according to the report.

The government is obligated to protect individuals from “popular justice” crimes, it adds.

OHCHR recommended that the government strengthen judicial institutions by assessing the presence of bribes in the court system, raise public awareness about the fact that mob attacks are illegal, promote the idea that everyone should benefit from a fair trial and the presumption of innocence, and ensure that authorities promptly investigate, prosecute and condemn mob killings and violence whenever they occur.

Updated at 7:20 p.m. with comments from Chin Malin, Soeng Senkaruna and Inn Bora