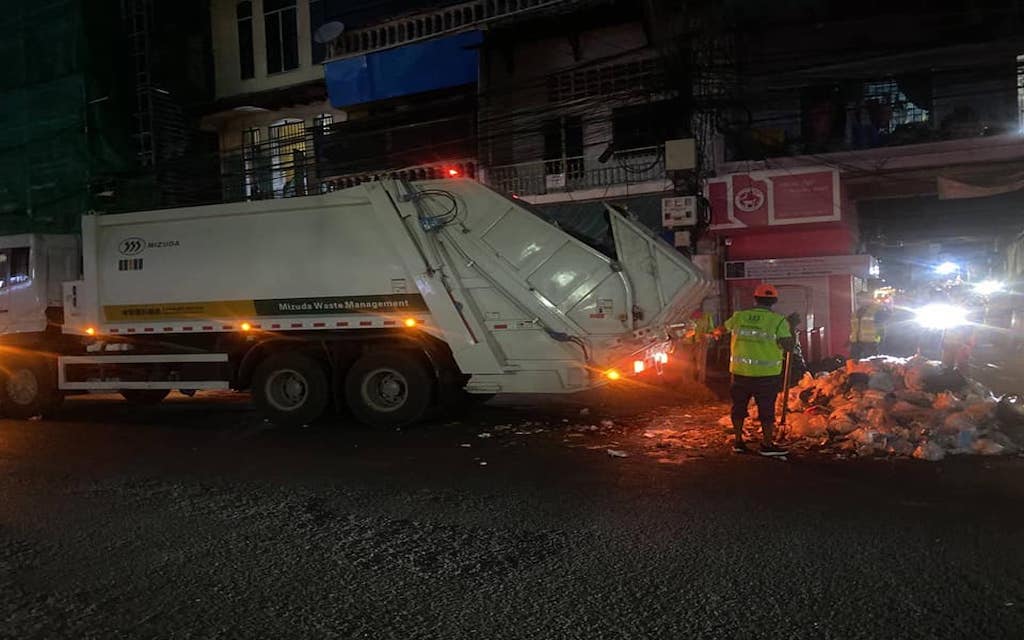 Mizuda workers are seen collecting trash at night in a photo posted to the sanitation company’s Facebook page.

Two trash collectors have died and another seriously injured in a traffic incident as workers and family spoke of Phnom Penh’s new waste management companies putting them on unfamiliar shifts, not providing equipment and lacking union representation.

Former sole operator Cintri handed over parts of its operations in the capital to two other companies as of July 1 — Singaporean 800 Super and Chinese-owned Mizuda Sanitation. The handover has been marked with accusations of union-busting and reneging on promises to guarantee employees’ jobs.

Around 2 a.m. Monday, the three workers were struck by a 17-year-old drunk driver in an SUV in Pur Senchey district, said Pen Yoeun, the wife of trash collector Duong Kong, 42.

Yoeun said her husband survived the incident, but doctors had told her he likely would not be able to walk for at least three months.

He had been moaning during the night from pain, she said. His worst injuries were to the head and ankle.

Kong moved to Mizuda Sanitation from Cintri as of this month, together with the two workers killed on Monday. His work at the new company was his first time doing nights, and although it was more dangerous he had lost his job at Cintri and had no other choice, Yoeun said.

“He never worked night shifts before,” she said. “I was worried, I didn’t want him to take turns at night, but he was afraid he would not have the money to pay debts. He said he just had to try and hope that he would be changed to a day shift.”

The company would pay for medical expenses and three months’ salary, she said.

The 40-year-old mother-of-two said she was considering resigning from her job at a garment factory to help her husband recover, but she didn’t know when he could return to work.

“If I don’t have my husband’s support, I won’t have the money to pay debts,” she said. “I don’t know whether he will be able to work or not in the future, and I am indebted to the bank.”

Seang Samut Meas, a Mizuda representative, said on Tuesday that the company had already resolved the case for the victims.

“I have already handed over the matter to the authorities, and the company has already provided assistance to them, supported them already,” Samut Meas said.

Nop Vannak, a road sweeper who now works for 800 Super, said she has become more concerned for her safety since learning of the deaths at Mizuda.

She works early mornings on a major road in Toul Kork district with many trucks passing through, she said.

Vannak said her new company had not yet provided trash bins to her and other sweepers, which they use as a kind of barrier around where they are working to protect themselves from oncoming vehicles.

“I am scared. Now I’m going to see how many months I can work for this new company. Is the new company working well, helping to protect workers, taking care of workers’ health, workers’ futures, and protecting us from danger, or not? I just want to know. If they do, I will continue. Otherwise, I will submit the paper to resign,” the 47-year-old said. She had been sweeping roads since 2012, she said.

Khun Tharo, program manager at labor rights group Central, noted that the two new trash collection companies did not yet have a union, so it would be difficult for workers to push for health and safety guarantees.

Providing protective equipment such as shoes and gloves, and setting appropriate policies for night-shift work were critical for trash collectors because of the injury and health risks they faced, Tharo said.

It was the responsibility of employers to take care of workers’ safety and compensation, he said.

“In this current situation, as the workers do not have a union yet, I don’t think there will be a push to have a movement to demand or negotiate with the employer,” he said. City Hall should set safety conditions as part of its deal with the private companies, he said.

Kao Sokwat, Cintri’s former union representative, who was fired alongside all union activists as part of the 1,000-plus layoffs this month, said the union had only been established in 2017. Previously, workers had not been given proper compensation in the case of accidents. The union had worked to improve safety conditions in the sector, but it was now dismantled, he said.