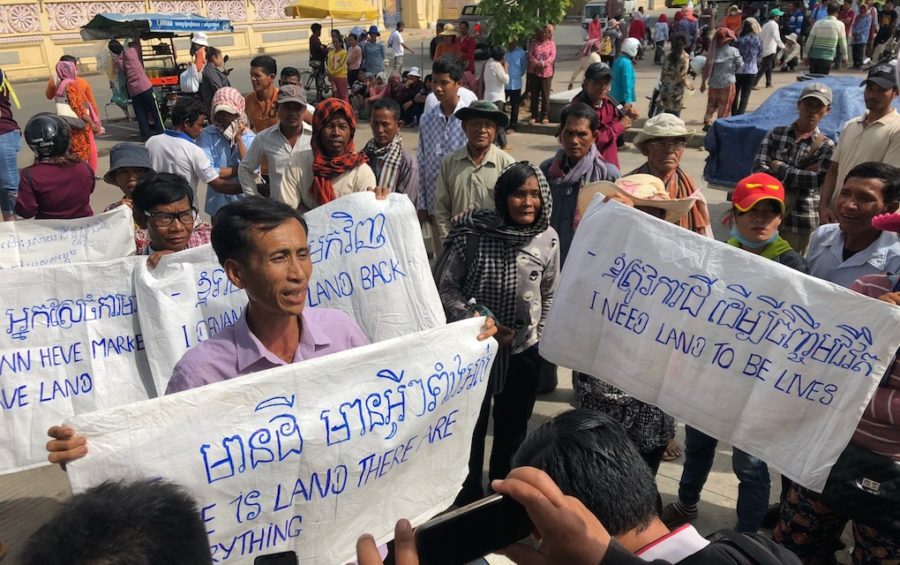 The Land Ministry has asked authorities to investigate and find the “ringleaders” who allegedly incited groups from Tbong Khmum province to travel to the capital and protest the loss of community forests that they had already sold off.

A representative from those groups, however, said their forests had been sold by commune and village leaders without their knowledge and consent.

On Monday, hundreds of people from five provinces, including about 100 from Tbong Khmum, held a rally near Phnom Penh’s Wat Botum, holding up banners and aiming to submit a petition to the Prime Minister’s Cabinet seeking intervention in their respective land disputes.

In a statement released later that day, however, the Land Ministry denied the claims made by seven communities from Tbong Khmum.

It said there was no communal land left in Dambe district’s Trapaing Pring commune where the seven communities came from. It had all been either sold to a Chinese firm, Harmony Win Investment, in 2011 or divvied up among residents, the statement said. One of two directors for Harmony Win is listed on Commerce Ministry records as being from China’s Liaoning province.

“Therefore, the Land Management Ministry cannot find a solution and asks the competent authorities to investigate the ringleaders — who incited and cheated these people to participate in these demands — and take legal action,” the Land Ministry statement said.

Sem Sang, one of the seven named Tbong Khmum villagers’ representatives, said the protesters would continue to make their case, alleging there was corruption involved in the sales.

“The villagers did not sell the land,” Sang said. “Authorities from the village, commune and district levels colluded and sold the land to the company.”

“We will still protest because we don’t have any land now,” he said.

However, Mom Sabun, former Trapaing Pring commune chief, disputed the account, saying the villagers had sold their land to the company but later returned to retake it.

“People sold that land themselves,” Sabun said. “Their leader got thumbprints from every house and received the money from the Chinese company.”

Nhil Pheap, community coordinator for the Coalition of Cambodian Farmer Community (CCFC), who observed Monday’s protest, said the seemingly endless delays in finding solutions to the country’s unresolved land disputes was due to the involvement of moneyed interests.

The government should follow the prime minister’s five-step plan to eradicate corruption and finally find solutions for dispossessed people, he said.

Prime Minister Hun Sen has advised that officials take a bath, look in the mirror, clean the body, apply treatment and finally conduct surgery — the last step implying the removal of those who fail to reform.

“In order to end the issue, the government must have a clear mechanism, and dare to cut off [corrupt officials] because the issue of land encroachment has happened in a systematic way,” Pheap said. “The government must use their power and follow the rule of law, handling [cases] on legal grounds and with clear proof.”

Kong Chamroeun, an official from the Prime Minister’s Cabinet, accepted the protesters’ petitions and promised to contact each group for a discussion next week.

According to a Land Ministry report, there were 1,500 open land disputes from around the country as of the end of 2018.

Claims Against a Senator

Only a small fraction of the total families involved in the dispute had received any compensation, she said.

Just 65 of 582 families in Oral district and 25 of 550 families in Thpong district who made claims on the plantation’s land had received a settlement, she claimed.

The villagers were suffering without land or compensation, she said.

“One villager fell ill. He has no money to support his children for their studies,” she said. “Some are in debt with the bank, and not just one bank. Because they lost their land, they have no land for farming and some even became depressed till they died because they had no money to pay their debts.”

Khieu Saron, 37, said she represented 260 families with claims to 670 hectares in Svay Rieng.

She said she was rankled by the difference between their struggles and the lifestyles of local and government officials.

“The superior officials always sleep with air conditioning. They don’t know how difficult it is for us,” Saron said. “Forget about money for spending — we almost don’t even have rice to eat.”

She said the villagers had lost their land to a private company, NKV, in 2010.

“This is the impact. Our children have no higher education. So in the future, our children will only become workers for others.”