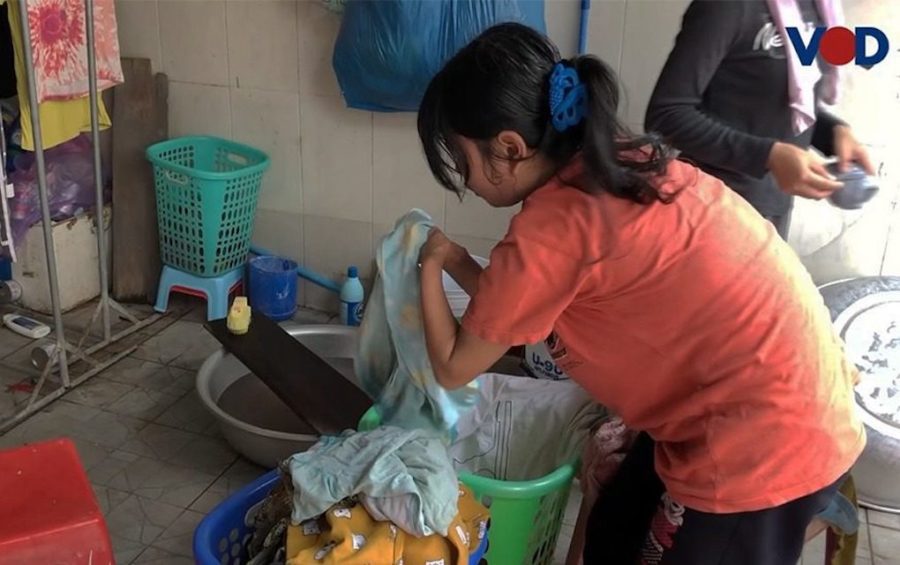 When customers first walk into Phnom Penh’s New Life Laundry Shop, owner Thy Leanghour said they are often skeptical about his laundromat’s service. Some customers come with only one article of clothing for washing to try out the shop, fearful its employees will not clean their clothes very well, Leanghour said.

One woman would not even enter the shop, he told VOD. She threw a shirt on the ground instead of handing it to a launderer who uses a wheelchair.

“On the first day, a woman came and just threw [her shirt at us],” Leanghour told VOD at the shop in late May. “She said she didn’t want to get off of her motorbike. And my colleague is in a wheelchair and so how could she get to it fast enough? The shirt fell on the ground and became dirty, and [the customer] said ‘It probably will not be cleaned!’”

But when the customer returned to pick up her shirt, she acknowledged that the New Life staff did a good job, even admitting that their services were better than other laundry shops she had visited in the past, Leanghour claimed.

The New Life Laundry Shop is unique among small businesses in the capital because it exclusively employs people living with disabilities, offering them an opportunity to independently earn an income and challenge the biases often associated with disability in the workplace.

Leanghour, the 32-year-old shop owner who is unable to use his right leg, said he opened New Life in 2018 after leaving a job with an NGO, Cambodian Youth with Disabilities and Development. He wanted to open a business that could employ people with disabilities and he felt they could work in a laundromat easily, even if they did not graduate from high school.

“I want to see them living independently because I have even seen some people without disabilities beg for money at traffic lights,” Leanghour said. “So, I want to gather [some people] to open a laundry shop and provide accommodation, food and income to them so they would not have to beg.”

Tucked into a shophouse in Boeng Tompun commune’s Borey 999, New Life offers the same services and speed of any other laundromat — with just two employees.

Touy Sreyrei, a 27-year-old launderer from Prey Veng province, said she had to stop studying after she reached grade 9 because she struggled to travel to school and her family needed her help at home. She came to Phnom Penh in 2017 looking for work, and attempted to learn how to raise pigs with an organization offering job training to people with disabilities. But even with the specialized training, she struggled to use her hands, which were deformed since birth.

When she heard Leanghour had a laundry shop, she wanted to give it a try and the job suited her, Sreyrei said.

“Initially, it was difficult too as my hands are unlike others, but now I am more skillful,” she told VOD. “If we let ourselves fixate on our disabilities, we would not know that we are able to do things like others. And I do not want to completely rely on relatives and my mother.”

Yeap Malyno, director of the Social Affairs Ministry’s welfare for persons with disabilities department, said the government has created policies to promote jobs for disabled people, including a rehabilitation training center that also places them in jobs. About 10,000 people have received training through these government programs since 1991, he said.

Malyno said that workplaces that hire disabled individuals help to improve their standard of living and grow the economy.

In addition to the government’s skills training programs, including classes for mechanics, pig farmers and tailors, there are also options for disabled people to open their own businesses, Malyno said. NGOs, microfinance institutions and private companies offer information, training and loans to disabled people who wish to start a business, he said.

Sun Sreymom, another New Life laundry worker who lives with a visual impairment, said it was not easy for her to participate in job trainings. After abandoning her studies at grade 6, she came to Phnom Penh from Kampong Speu province in 2018 and has spent two years developing her job skills to earn a higher income.

Sreymom, 22, took a job at the laundry shop last year and said she was determined to continue pursuing a formal career.

“We really have difficulties in our work, but we need to overcome them. We do not want to do something that society hates,” she said, referring to begging or stealing.

Leanghour, her boss, said his business has been hit by the Covid-19 pandemic, which has hindered Cambodia’s key industries and resulted in plummeting consumer demand, the World Bank said in a recent report. However, thanks to his business’s speedy service and thorough washing, he hopes New Life’s reputation will grow, and people will learn not to discriminate against, but rather motivate and support people living with disabilities.

“Over the last few months, due to the Covid-19 crisis, my business has been very low,” he said. “I would like to suggest that if you want laundry service, please come to our shop [and] help disabled people.”