Lawyer for Hun Many, Thy Sovantha Elected Bar Association President 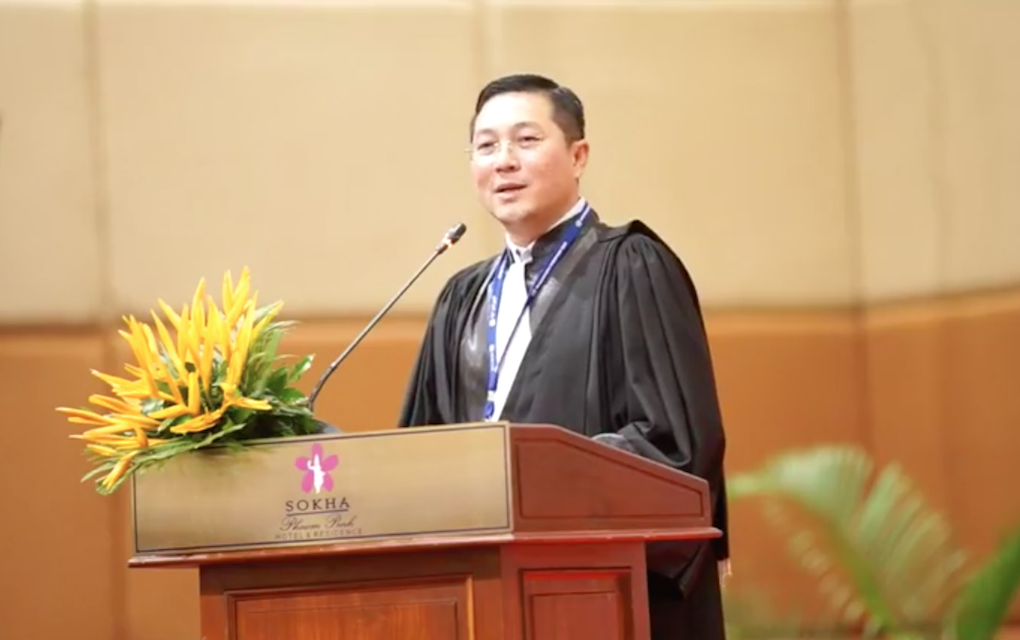 Bar Association president Ly Chantola gives a speech upon his election to the post on October 16, 2020, in this screenshot of a video posted to the association’s Facebook page.

The Bar Association has elected as its new president a government lawyer who is working the treason case against opposition leader Kem Sokha, advises the cabinet, and has represented the prime minister’s son Hun Many as well as political activist Thy Sovantha.

He was up against opposition CNRP lawyers Ket Khy and Sam Sokong; Sar Sovann, who has defended Khmer Rouge head of state Khieu Samphan as well as maverick radio broadcaster Mam Sonando; and Sek Sophorn, a lawyer at Rights & Business Law Office who has acted for journalists, including representing the Cambodian Center for Independent Media, VOD’s parent organization.

In a speech after the vote to hundreds of lawyers, Chantola said the election had been smooth and civil.

“We competed without any problems or attacking each other,” he said. “We discussed our policies, we only talked about our qualities … to get the support of and votes from fellow lawyers.”

“I am very proud and happy,” he continued. “I am very happy to receive the landslide support from all my fellow lawyers.”

Chantola, according to his online profile, has been a member of the Council of Ministers’ Council of Jurists since 2009, reviewing draft laws before they go to the cabinet. He has also taught at the Royal University of Law and Economics, and is managing partner of SVP Law.

In 2014, Chantola won $10,000 in compensation for Hun Sen’s son Many after a businessman used Many’s name to fast-track customs clearances. Many donated the money to charity.

Chantola also pursued a defamation case against Sam Rainsy, co-founder of the banned opposition CNRP, on behalf of political activist Thy Sovantha. Sovantha rose to prominence as a young supporter of the opposition in 2013 as a high school student, before turning against the CNRP and suing the party’s other co-founder, Sokha, over an alleged mistress in 2016.

The lawyer also led court action against tax department deputy director Vann Puthipol after the Finance Ministry official alluded to lawyers being “cows” in a Facebook post in 2017.

This year, Chantola has been part of a four-lawyer team representing the government in the trial of Sokha, who was arrested for alleged treason in 2017. Sokha was imprisoned for a year, held in de facto house arrest for just over another year, and currently remains under court supervision and is banned from political activities. His trial commenced in January, but has been postponed due to Covid-19.

Chantola denied there was any conflict of interest in working for the cabinet while heading the lawyers’ association.

“I am currently deputy head of the Council of Jurists at the Council of Ministers, but the role is not a public function as a civil servant,” he said. “So through this role there is no conflict with the work of a lawyer or president of the Bar Association. It is not a problem.”

He said he wanted to improve the ability of lawyers to defend their clients at police stations after arrests.

“That is still a challenge and I have to deal with it,” he said. “The Bar Association always tries to solve this problem with the Ministry of Interior.”

He also plans to promote awareness about the role of lawyers. In particular, many people were currently confused about the responsibilities of judges and lawyers, he said.

Khy, who came second in the vote on Friday, said he was satisfied with his campaign. He had won 130 votes without “even spending on a cup of coffee” to lobby for supporters, he said.

He suggested that other candidates had plied potential supporters with drinks. “During the election campaign, he called people around to have a drink. Even in a commune election, the law forbids someone from doing so, because it is the same as buying ballots. But the Bar let them do this.”

Khy added that Chantola should step away from his roles in the government and at his private law firm during his Bar Association tenure.

Political interference in the country’s judicial system has long been cited as a concern, particularly with the Supreme Court’s chief justice, Dith Munty, a senior member of the ruling party.