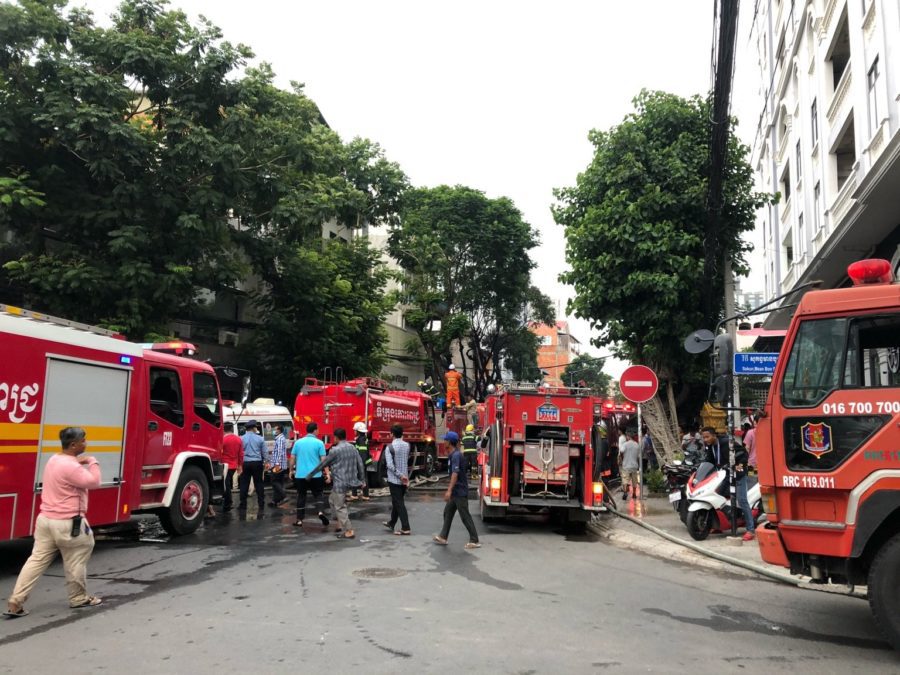 Police have summoned three Phnom Penh internet users over comments they left while watching live broadcasts of firefighters, including suggesting they were slow to put out fires due to corruption.

The municipal fire department posted apology videos from two of them, while calling on the third to turn up or face legal action.

Vong Leakena, who uses the Facebook account NaNa Anna, insulted authorities by suggesting firefighters were negotiating a price to put out a fire, and was summoned to apologize, the department said.

Leakena had commented under a live news broadcast by Post News TV showing a recent fire in the city.

“The fire truck is unable to reach an agreement,” she commented. “What’s the fire truck doing? … Please help them, too.”

In her apology video, Leakena said she had made a mistake.

“Today I am appearing to clarify comments on the page of a media outlet that impacted the honor and reputation of Phnom Penh firefighters. Today I would like to promise that there will be no second time, and if there is a second time, I will face legal action,” she said.

Another resident, Im Roeun, who has the Facebook alias Rural Hunter, had commented: “Does the fire truck keep asking for a price?”

“Turning on the fire hose to put out the fire could risk not receiving any fee in return. So they delay it,” Rouen wrote.

He apologized that the comments were “inappropriate.”

“I would like to apologize for all mistakes, and please, the brigade, the firefighters, forgive,” he said in his apology video.

A third Facebook user, Seakliv Va, has also been summoned for similar comments.

Police said the user had evil intentions to pollute the social environment.

“Often some people do not think, or lack thinking when our forces work hard both mentally and physically, sacrificing their lives to rescue and save brothers and sisters and people during urgent fires,” Sokseyha said.

“They do not help, but they accuse authorities like this or like that and it impacts the honor and dignity of the authorities, so we have led our team to summon them to admit the mistake and publicly apologize,” he said.

“The trucks arrive and stop at the scene, but don’t spray. The flashing lights are on, the trucks are all over the areas still burning, but they’re negotiating the price first,” Kheng said last February. “You see, this means that our authorities have done wrong.”

In response, the ministry’s fire prevention department chief Neth Vantha said there had been no extortion for the past 10 years.

Sokseyha, the Phnom Penh police spokesperson, defended the disciplining of the internet users.

“If they make constructive criticism to make the armed forces improve or such, it is OK. But their way of stating things is insulting and damages the authorities’ reputation,” he said.

Licadho spokesperson Am Sam Ath said the fire department would be better off giving explanations of their firefighting processes rather than summoning those who misunderstand them and believe there is a delay.