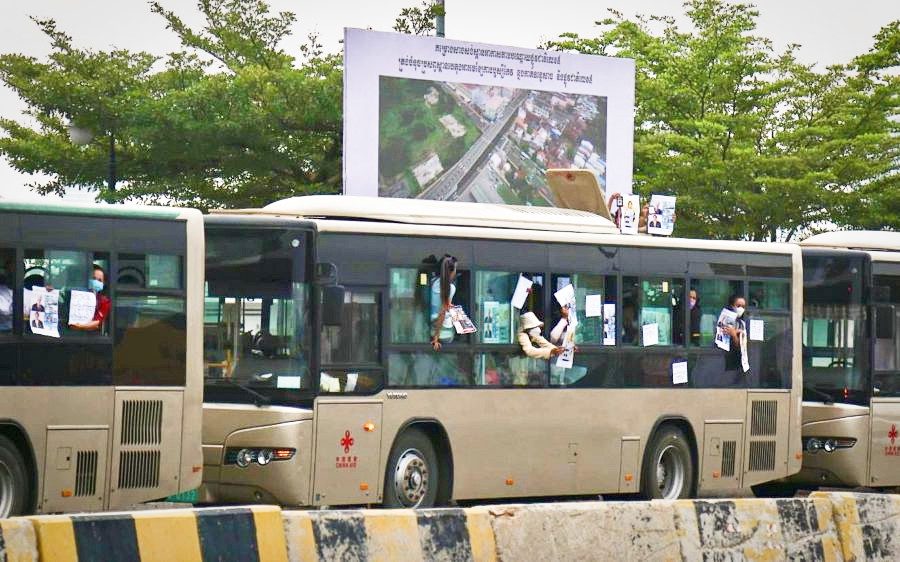 NagaWorld workers hold posters from the windows and roof of the buses their were being held in at the new Freedom Park in Russei Keo district on March 18, 2022.

Four of five union negotiators returned to a meeting with NagaCorp and the Labor Ministry on Wednesday afternoon — all but union leader Chhim Sithar.

A majority of union members had voted against continuing negotiations at all, as the company and ministry had been unwilling to even discuss the reinstatement of terminated workers in previous meetings, Sithar said.

But as a compromise, four of five representatives attended the meeting, but only to present a letter reinstating their demand for NagaWorld to consider the proposed swap of active employees who were willing to quit their jobs with laid-off workers, she said.

Asked if there was a split in the senior leadership and the optics of her absence at the meeting, Sithar said, “No, no. We have good communication. There is no split. We have informed our members about this.”

Sithar had earlier said on Tuesday that all five representatives planned to boycott the meeting.

Chhim Sokhorn, Sithar’s sister and the union’s secretary-general, spoke outside the Labor Ministry after the negotiation meeting on Wednesday.

“I came because we want to show our passion for negotiations to end the labor dispute,” Sokhorn said.

During the meeting, NagaCorp representatives also clarified their comments from Monday about possible terminations of 600 more active workers, she said. “The company said they have 600 more workers than required, but the company is not trying to lay off those workers.”

Labor Ministry representatives were passive, she added. “The ministry only sat and listened to the negotiations between workers and the company. They did not push for a decision. I think this dispute will take longer and longer.”

NagaCorp issued a statement earlier in the day about the 600 workers, saying a plan to lay them off was “fake news.” Labor Ministry spokesperson Heng Sour did not respond to questions.

Wednesday was the last of three scheduled days of negotiation between the company and union, and Sithar previously told VOD that the ministry urged them to take the dispute to court if it could not be solved in these meetings.

Meanwhile, workers continued their daily demonstrations — lasting mere minutes before police again forced them onto buses to be taken away from the Phnom Penh casino.

Sok Tha Vuth said 138 workers joined on Wednesday. They were bused through the Chroy Changva peninsula, once again past Phnom Penh Safari and to “Freedom Park” on the city’s outskirts to make their own ways home.

Tha Vuth said she preferred her union leaders not go to negotiations, as the company and ministry would not discuss reinstatement. “But, at least, four of them went, which shows they still respect them,” Vuth said.

More than 1,300 workers were laid off last year, and workers allege that the company targeted union leaders and members.