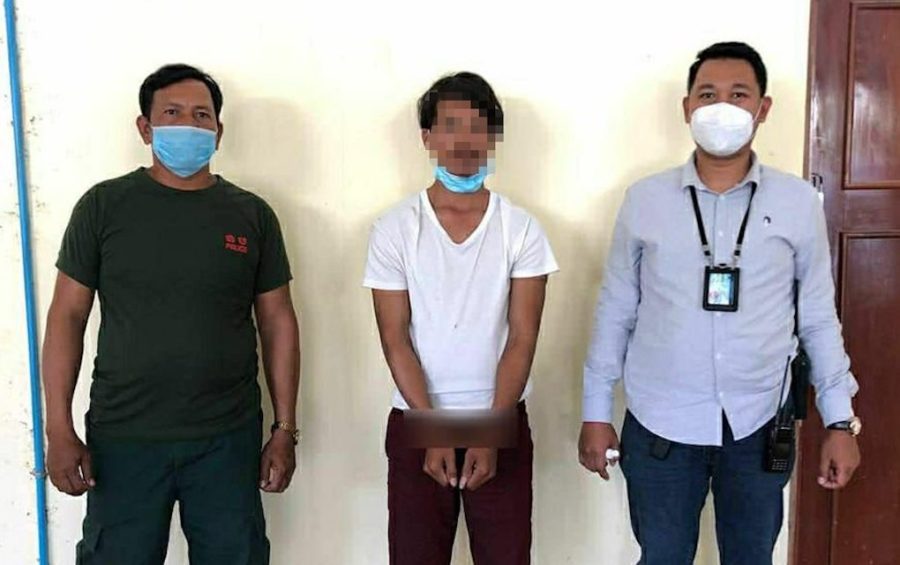 A man arrested in connection to a social media post in which he tells factory workers not to receive Chinese Covid-19 vaccines, on March 24, 2021. Wrists blurred in handout photo. (Phnom Penh Municipal Police)

UPDATED — The Phnom Penh Municipal Court on Thursday charged a man under the nation’s new Covid-19 law over a social media video in which he tells factory workers not to take Chinese-made coronavirus vaccines, officials said.

Court spokesperson Kuch Kimlong said Thursday evening that the man, whom authorities have yet to name, was charged with obstructing the enforcement of Covid-19 prevention measures.

He was questioned by a deputy prosecutor and sent before an investigating judge, Kimlong added.

In the 30-second TikTok video, the suspect claims that workers would die in two to three years if they took the Chinese vaccine.

“All the factory workers: [You] do not have to be injected. Believe me! Good intentions from me,” the man says in the video.

“Now, we are building a case to send to court,” Thet said on Wednesday.

Regarding the case, Labor Ministry spokesperson Heng Sour posted on his Facebook page Wednesday morning asking members of the public, and especially workers, to take photos and report to authorities and factory administrators anyone they see telling them not to be vaccinated.

“Please, brothers, believe in science, and all the vaccines that the Royal Government has tried to find,” Sour wrote. “I and my friends have already been vaccinated and have not seen any impact on our health.”

Of the three vaccines authorized for use in Cambodia, Oxford-AstraZeneca’s vaccine was approved by the World Health Organization last month, while the WHO anticipates a decision on two Chinese-made vaccines, Sinopharm and Sinovac, in April at the earliest.

Cambodian Labor Confederation president Ath Thorn said he was glad the vaccines were available to workers, but it was up to individual workers whether to receive one. He said he did not know why anyone would discourage people against vaccinations.

“In general I don’t think there’s any obstacle or problem with the vaccinations because most people seem to want to be vaccinated,” Thorn said.

On Tuesday, the Labor Ministry made a request to the Garment Manufacturers Association in Cambodia to organize lists of doctors and rooms to facilitate the vaccination of garment factory workers.

In a statement, the ministry also said workers should receive a paid day off each time they receive a vaccine dose.

A small number of garment factory workers have been found positive for Covid-19 amid the “February 20” outbreak, including a laundry worker in the capital’s Dangkao district, which led to more than 700 contacts being tested.

The country has given out more than 300,000 doses of the Sinopharm and AstraZeneca vaccines so far, out of a target of 20 million doses for 10 million people. Cambodia is scheduled to receive its first 1.5 million doses of Sinovac on Friday.

Updated at 7:21 p.m. with details about a charge under the Covid-19 law from Kuch Kimlong.