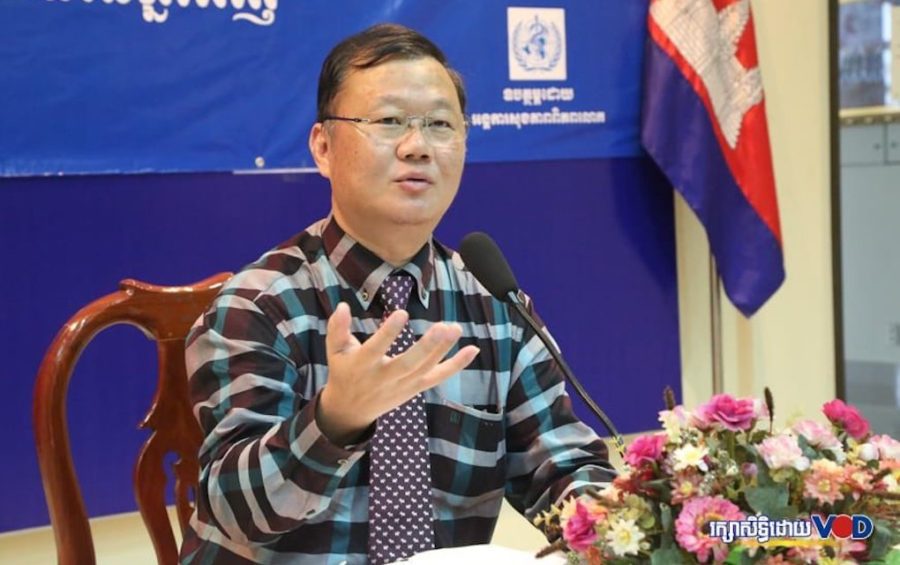 A Chinese man who was identified as Cambodia’s first case of the novel coronavirus is in stable condition, but remains in quarantine in a Preah Sihanouk provincial hospital, officials said on Tuesday.

The 60-year-old man, Jia Jianhua, traveled from China’s Wuhan — where the new strain of the virus was first detected — with three family members who entered Cambodia through Sihanoukville International Airport on January 23, health officials said on Monday.

Jia developed a fever and runny nose on Saturday and tested positive for novel coronavirus (2019-nCoV) on Monday, they said.

Some 2,800 confirmed cases of the virus have been reported globally, with the vast majority found in China, the World Health Organization (WHO) said. At least 80 people have died in China, where WHO’s risk assessment remains “very high,” and the virus has spread to 12 other countries.

Five cases have been reported in both Thailand and the U.S.; four in Japan, South Korea, Singapore, Australia and Malaysia; three in France; two in Vietnam; and one case in Canada and Nepal, according to a WHO report from Monday.

“The doctors are taking care of him,” Sovann said.

As of Tuesday afternoon, the ministry had not confirmed any other cases of the virus, he added.

Preah Sihanouk provincial hall spokesman Kheang Phearum said doctors have kept Jia in a private room in the provincial referral hospital and were tracking his condition.

“We don’t allow people or any patients to come close to that place to avoid any impact,” Phearum said.

According to a statement issued by the Health Ministry on Monday, Jia stayed two nights at the Independence Hotel in Sihanoukville before transferring to the Queenco Hotel & Casino on Saturday. He spent two hours in the swimming pool, the statement said.

It added that Jia’s three family members tested negative for the virus.

Khun Dararaksmey, who works at the reservations desk at the Independence Hotel, said on Tuesday that staff aired out and cleaned the room where Jia stayed using a chemical cleaner.

“Everybody needs to practice good hygiene,” she said. “We ask guests to clean [their] hands with [sanitizer] gel when they eat.”

To limit spreading the virus, as with other acute respiratory infections, WHO recommends avoiding close contact with ill people; frequent hand-washing; avoiding unprotected contact with farm or wild animals; and practicing cough etiquette, including maintaining distance from others, covering coughs and sneezes with disposable tissues or clothing, and washing hands.