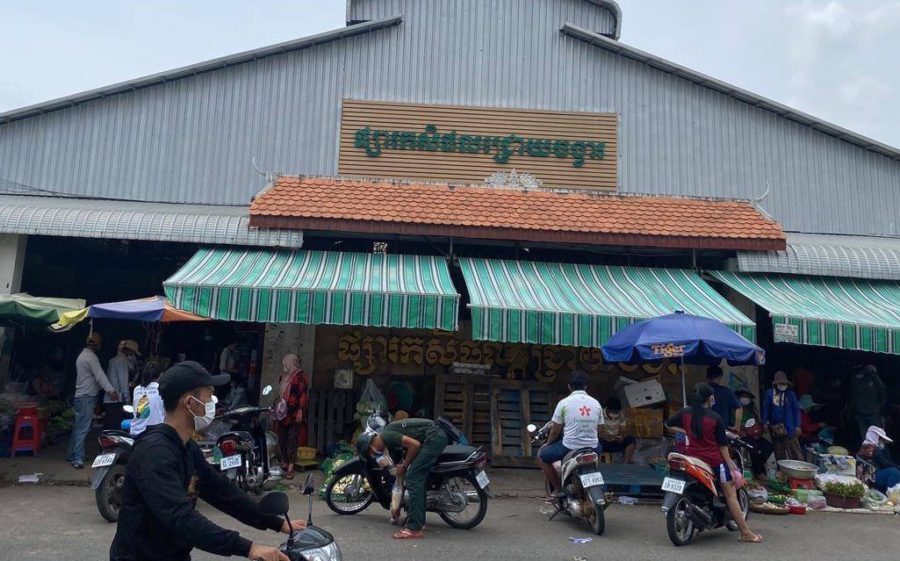 Market vendors at Chroy Changva market, pictured above, said they are unable to pay the rent for their stalls and that the owner has only offered them a $5 discount. (Sub-Committee on Research and Monitoring of Suspected Covid-19)

The question of reducing rents for spaces at closed-down markets is stalled amid an ongoing surge of Covid-19 cases, with the Phnom Penh governor telling vendors to hold off on paying until the outbreak is stopped and authorities can negotiate with owners.

At Chroy Changva district’s agricultural market, Srey Neath usually runs a hairdressing salon in three stalls, for which she pays $75 each a month. Business has been affected for a month due to Covid-19 public health measures that have culminated in the current lockdown and closures of markets.

But so far, the private market’s owner, through the mediation of the commune chief, has agreed to only a $5 discount in rents, Neath said.

“I am worried a lot, due to having no income at all. Only expenses and we have no food in stock either. So with that, [I] am very upset,” she said, adding that sellers were asking for the district governor to intervene.

Ma Khim, 60, who sells coffee at the market, said vendors won’t pay rent at all unless the owner agrees to cut rents in half.

“If he agrees to a 50 percent cut, we all will agree to pay him without saying anything, and also thank him for being kind to the poor,” Khim said.

Market owner Taing Buntech could not be reached for comment.

District governor Khlaing Huot said officials haven’t had the time to mediate the problem of market-stall rents as they deal with various lockdown-related issues. But he said market owners must understand the plight of vendors and compromise.

“As [they] can’t sell, how could [they] pay [the stall fee]? If [market owners] resist and mistreat the vendors, it means they might not only face a problem with those vendors, but also with the district,” Huot said.

Phnom Penh governor Khuong Sreng echoed the sentiment, saying it was a problem authorities would resolve, but the ongoing transmission of Covid-19 demanded urgent attention.

For now, market vendors should hold off on paying rent, he said.

“Let’s see. We will settle it when we end Covid. [We] will discuss it with them. Right now​, we are fighting Covid, we haven’t yet thought of that point,” Sreng said.

“All vendors, please don’t pay [the rental fee] at this time, or try to work with them first. And when you ask our authorities for help, we will discuss it with the stall owners after ending Covid.”

At Prampi Makara district’s O’Russei market, an early epicenter of the current outbreak, market manager Hat Vanthy said the situation was complicated as most individual stalls in the market were owned privately.

Sellers have asked for 50-70 reductions in fees, but stall owners have so far agreed to only a 15 percent cut.

Vanthy said negotiations would be ongoing.

“If they can’t sell, their stall owners should understand that. They can’t just do it like this. I cannot speak for them. If they can’t settle it when they meet each other, we will coordinate it for them. We cannot answer on behalf of the stall owners, because it is not ours,” he said.

City Hall closed down Phnom Penh’s markets in an April 23 order amid the country’s most significant Covid-19 outbreak to date. The country reported 880 new cases on Thursday, the worst day yet.