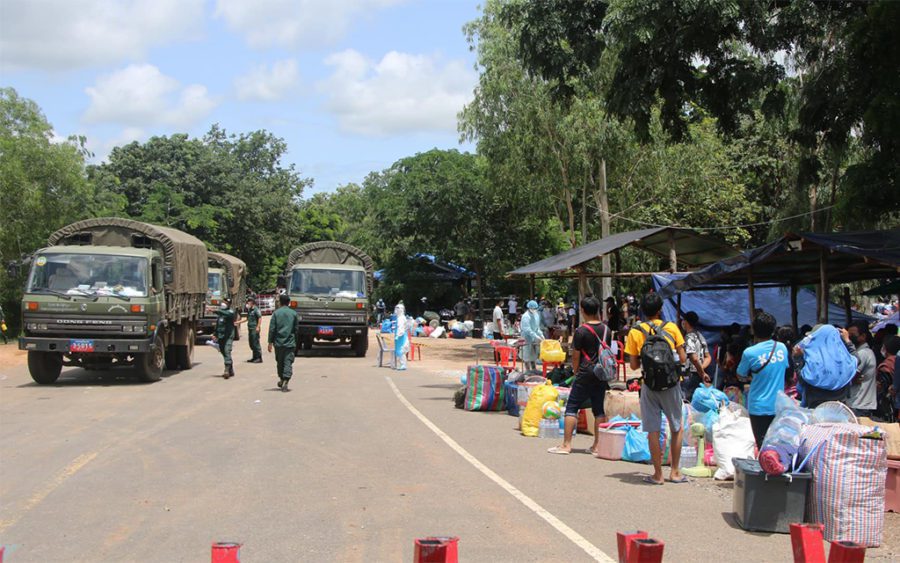 Migrant workers wait at a border checkpoint while military trucks pass in a photo posted to the Banteay Meanchey provincial administration’s Facebook page on August 13, 2021.

Thousands of Cambodians have continued to return to the country in the past three days from Thailand’s major Covid-19 Delta-variant outbreak, as provincial authorities along the border have increasingly locked down markets and villages due to the spread of the new viral strain.

Oddar Meanchey deputy governor Dy Rado said on Wednesday that about 2,000 Cambodian migrants had passed through the O’Smach border since Sunday, surging after a relatively quiet couple of days for the province after the border was reopened late last week.

Among the returnees, more than 200 have tested positive for Covid-19, he said.

The Delta variant was being managed among the returnees thanks to preparations made during the two-week border closure to have enough medical staff and treatment centers, he said.

But the new strain is spreading in the community, and the authorities are taking action by closing markets, villages and areas where new cases are being found, Rado said. More than 100 Delta cases had been found in Oddar Meanchey, he said.

“If in any location or village we find positive Covid-19 cases, we close that location and that village by designating it as a red zone, and the surrounding areas are marked as yellow zones,” he said.

In Battambang province, 49 markets have been closed down, according to the provincial administration.

“We are afraid of Delta infections because Delta is more dangerous than normal Covid, as we all know, like in India and Thailand,” said Battambang deputy governor Soeum Bunrithy.

In the three days to August 18, about 500 workers had returned from Thailand through the four border crossings in the province, and 32 had tested positive for Covid-19, Bunrithy added.

Kristin Parco, chief of mission for the International Organization for Migration, said 40,000 migrants were forecast to return to Cambodia in the six weeks following the border reopening, with Oddar Meanchey’s O’Smach and Banteay Meanchey’s O’Bei Choan expected to be the most active.

Good coordination between Thai and Cambodian border authorities had been observed, Parco said, but “[i]t continues to be of critical importance to adopt a health compliant approach to border management in order to effectively stop and manage further transmission of COVID-19 to rural communities.”

“There is a risk of the current pandemic situation worsening given the high transmissibility of the Delta variant,” she said, noting potential challenges from the use of unofficial points of entry as authorities moved migrants across the border in batches of 100 to 200 individuals.

According to the Health Ministry, the Delta variant has now been found in 22 provinces and Phnom Penh — all except for Kep, Takeo and Kratie.

Nevertheless, the province had found 38 Delta cases so far, she said.

“Related to the Delta, we did not know where the infections came from. Maybe it was from one or two workers who came through the provincial corridors with Thailand,” Ravy said.

Banteay Meanchey provincial administration spokeswoman Ros Sophany could not be reached for comment.

According to reports from their respective provincial administrations, Battambang has recorded 4,916 total cases and 3,730 recoveries as of Thursday; Oddar Meanchey 5,918 total, of which 3,529 are active; and Preah Vihear 857 total cases and 522 recoveries.