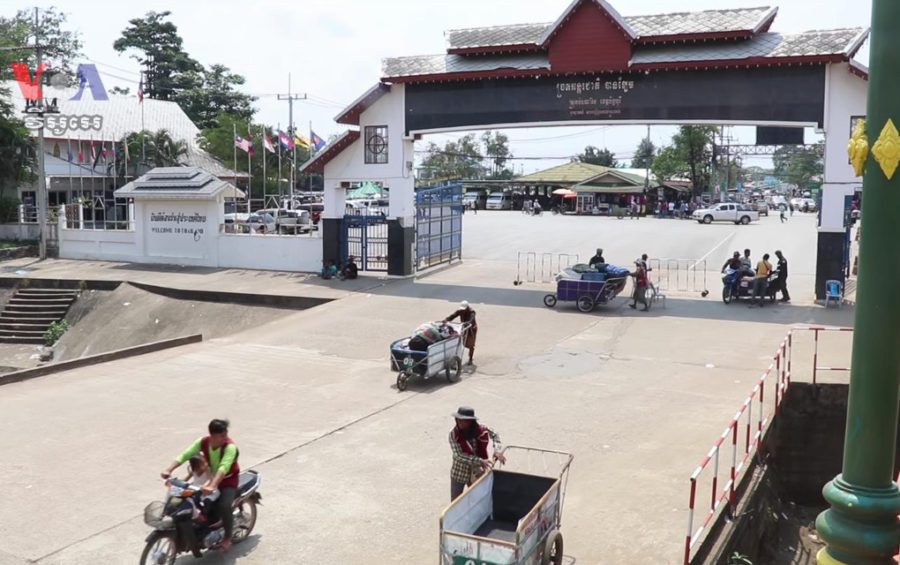 Widely shared images of migrant workers supposedly flooding back from Thailand into Cambodia was a misrepresentation showing the usual flux of people during Khmer New Year in April, authorities said.

But at Battambang province’s Daung International Border Checkpoint, the traffic of migrants going in and out is about three times normal levels, possibly for the month-long Kathin festival or because of a lull in the Thai economy, government and NGO officials said.

The Cambodian Embassy in Bangkok and the Daung border police both issued statements on Wednesday after images of a supposed surge in migrants returning to the country were circulated online by news outlets, including on the front page of local newspaper Koh Santepheap. The article has been taken down from the newspaper’s website.

“All workers: Remain calm and continue working as usual. Don’t believe the broadcast and incitement from some news media that make you all waste money,” the embassy said. The images were months-old, it said.

“The Daung International Border Checkpoint’s police would like to appeal to all media outlets and social network users: Please don’t broadcast news that is not true and has no clear sources, that cause confusion and harm the honor of competent institutions performing their duties for people and the nation,” the immigration police statement said.

Movements along the Thai-Cambodian border are currently under the microscope just over a week ahead of the pledged return of Sam Rainsy, acting president of the dissolved Cambodia National Rescue Party (CNRP) who has lived abroad to evade court actions against him since late 2015.

Rainsy has vowed to attempt a return to the country on November 9 via Thailand, though his deputy Mu Sochua was denied entry there earlier this month. The Cambodian government has said it would immediately arrest Rainsy if he stepped foot in the country.

Ath Bony, spokesman for the Interior Ministry’s general department of immigration, said the Daung crossing was seeing a high number of people going in and out, but attributed the spike to ongoing Buddhist celebrations.

On Monday, 979 people entered and 825 people left Cambodia through the checkpoint, Bony said, about three times the usual traffic of 200 to 300 people a day.

However, Yin Meng Ly, rights group Adhoc’s Battambang provincial coordinator, said the traffic through the border was unusual and “significantly” more than last year, though he could not provide figures.

Dy The Hoya, program officer at labor rights group Central, said a slowdown in Thailand’s economy could be pushing some Cambodian migrants back home.

“Some companies have complained that orders have decreased a lot, and they need to reduce their workforce,” The Hoya said. “They have not immediately reduced the number of workers but they have reduced working hours.”

Forecasts of Thailand’s economic growth have recently been lowered amid uncertain global trade. Last week, the U.S. also announced the suspension of $1.3 billion worth of duty-free trade because Thailand had not taken steps to “afford workers in Thailand internationally recognized worker rights.”

According to the Cambodian Labor Ministry, more than 1.1 million Cambodians are legally working in Thailand. Hundreds of thousands of others are thought to be working there illegally.