Military Drone Found Near UDG Site Was Made in China, Official, Experts Say 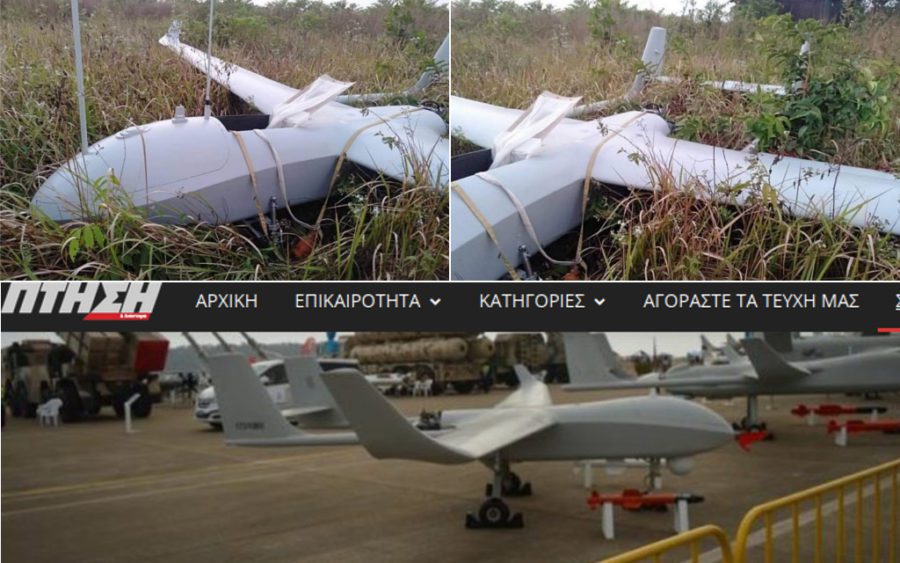 Photos of the drone found in Koh Kong province, shared by Information Minister Khieu Kanharith, above; and a screenshot of a photo of a CH-92A drone published by Greek magazine Ptisi & Diastima, below

The official said authorities were still investigating which country was responsible for the drone, which landed in Koh Kong’s Kiri Sakor district on Thursday.

But drone researchers said there were no public records of the Cai Hong-92A (CH-92A) model — a mid-size reconnaissance drone that is capable of being armed — being sold in the region, and that the model’s limited control range suggested that it was likely launched from within Cambodia.

In addition, Cambodia is not known to have its own drones, according to the official and experts.

The unmanned aerial vehicle, or UAV, which is more commonly known as a drone, was discovered by locals and reported to authorities on Thursday evening, provincial police chief Samkhit Vien told VOD last week.

The crash site is some 7 km from a land concession held by Union Development Group (UDG), he said.

Chinese-owned UDG’s $3.8-billion resort development has been the focus of controversy in recent years. In 2018, U.S. Vice President Mike Pence raised concerns that China was developing a naval base within Cambodian territory, while anonymously sourced media reports pointed to the 45,000-hectare Koh Kong development as the possible location.

Cambodian officials have denied that the government would allow a Chinese base within its territory, and UDG says the company is building a luxury seaside resort community. But a Reuters report in 2018 found that the project’s hotels and casinos were mostly empty and unfinished.

Kelvin Wong, the unmanned systems editor at Jane’s International Defence Review, told VOD that there were “no known exports of the CH-92A to regional countries,” suggesting that the drone was not operated by Cambodia or neighboring countries known to have drones.

“The UAV is certainly a military-use platform owned and operated by a government entity,” Wong said.

“I’d bet my last dollar that it’s not civilian operated,” he added.

Wong said that he has seen the CH-92A on display in person at an air show and recognized the model after viewing photos of the Koh Kong drone published by local news outlets.

Thailand and Vietnam do not have Chinese-made drones in their inventory, according to the Center for the Study of the Drone at Bard College’s 2019 Drone Databook. Myanmar reportedly acquired several CH-3 drones from China, although there’s no clear evidence of the acquisition or whether the aircraft remain active, the databook says.

Dan Gettinger, the center’s co-director, said that he was “fairly confident” the drone in question was a CH-92A, based on the photos and the physical characteristics provided by officials to VOD.

The drone, which was found in thick brush with its parachute deployed, measured 5 meters long with a wingspan of 9.7 meters, Koh Kong provincial police headquarters said last week.

Gettinger said the CH-92A was not far off, with a length of 4 meters and a 9-meter wingspan.

While Gettinger said he was not familiar with China-Cambodia relations or the UDG development, he said the Chinese-made drone being found near the UDG site seemed too convenient.

“It seems awfully coincidental that there’s a Chinese drone within a stone’s throw from a  Chinese development,” he said.

“It could very well have a civilian purpose but it is designed with military customers in mind,” he added.

Wong, the Jane’s editor, said the model was typically used for “airborne surveillance and intelligence gathering to increase situational awareness of local forces, or to perform airborne patrol to enhance security for critical infrastructure as well as to investigate sites of interest.”

“It can also be used for targeting or cueing to direct other military assets on the ground,” he said.

“Given that this is a line-of-sight UAV that must stay within control range of a ground control station or relay, as opposed to a satellite communication-enabled model that can essentially operate as far as it has the endurance required, it suggests that the UAV was launched within Cambodia itself as Koh Kong province would be too distant for operators in Thailand and Vietnam to command the UAV,” Wong said.

Air Force Command spokesman Prak Sokha confirmed that the drone was the Chinese-made CH-92A, and said Cambodian authorities had contacted UDG, the Chinese government and the Chinese manufacturer of the drone.

UDG told authorities that the drone did not belong to them, Sokha said.

According to Sokha, the drone manufacturer told authorities that it had not sold the CH-92A model to any countries near Cambodia, and suggested that another company may have built a similar model and copied its design.

Sokha said that the Chinese manufacturer’s drone had wheels, but the one found in Koh Kong had none. Photos published on government-aligned Fresh News do not show the bottom of the drone, while other photos published by local news outlets appear to show a lack of wheels.

Asked to whom Cambodian authorities suspected the drone belonged, Sokha said it was too soon to say.

“We cannot form any conclusion in this matter but this product is a product of a Chinese company,” Sokha said.

The disassembled drone was being kept at Air Force Headquarters in Phnom Penh, he said.

“We will keep it and wait to investigate which company comes to claim ownership,” he said.

The Chinese government told Cambodia that it would investigate, Sokha said.

The Chinese Embassy in Phnom Penh and UDG did not respond to emailed questions as of Monday evening.

A woman who answered a reporter’s phone call to a number for UDG, which was listed on the Commerce Ministry’s online business registry, and who confirmed it was UDG’s number, took a reporter’s contact details and said she would share them with her supervisor.

Asked if she could provide a phone number or email for a company representative, the woman said, “Because it’s Chinese company, so don’t have.”

Defense Ministry spokesman Chhum Sucheat could not be reached for comment on Monday.

Anthony Davis, an independent security analyst and writer for Jane’s Defence Weekly, said in an email that the drone “appears to be almost certainly Chinese-manufactured,” and could have military and also possibly commercial applications.

“Given that the Cambodian Air Force is not known to operate drones one might assume it was being flown in the UDG area by a Chinese organization,” Davis said.

“For what purpose and the extent to which the Cambodian authorities are aware of it are both questions open to speculation,” he said.