Millions to Be Set Aside for Covid-19 Economic Impacts, Hun Sen Says 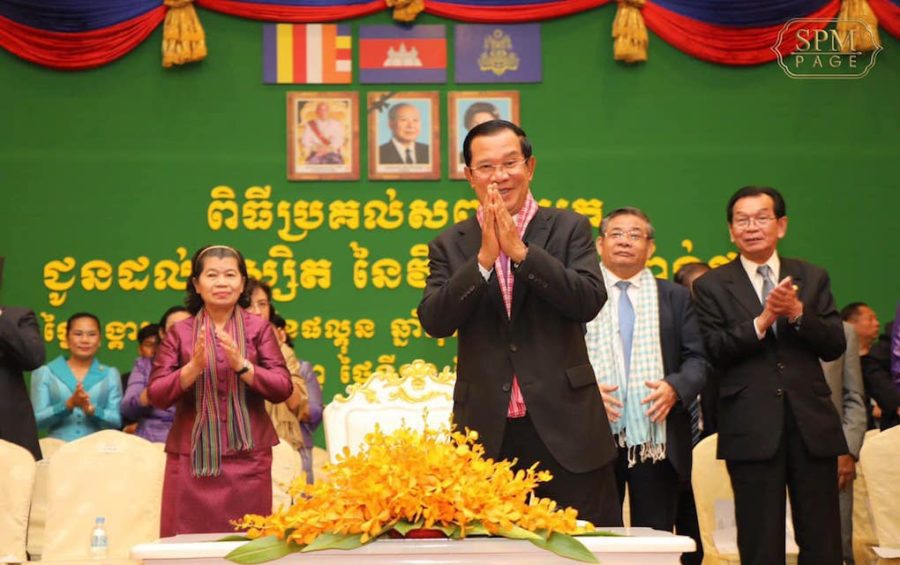 Prime Minister Hun Sen gestures during a graduation ceremony in Phnom Penh on March 10, 2020, in this photograph posted to Hun Sen’s Facebook page.

The government is preparing to set aside up to $2 billion in reserves to respond to the economic fallout of the Covid-19 global outbreak, Prime Minister Hun Sen said on Tuesday.

During a graduation ceremony in Phnom Penh, Hun Sen said the government had made a preliminary estimate of the impact that Covid-19 would have on the national economy. As a first step, the government would prepare about $800 million to cover expenses and economic losses over the next six months related to the slowdown.

“In case [economic impacts from Covid-19] last for six months, $800 million has been reserved to rescue the economy,” Hun Sen said, adding that the government would reserve up to $2 billlion if Covid-19 impacts extend for a year.

He said he would announce more measures to help the economy on April 1.

“If it’s prolonged for a year, how much would the economy fall, and how much would we need to fix it?” he said. “We are ready to reserve between $800 million to $2 billion.”

Finance Ministry spokesman Meas Sok Sensan said the ministry has already started dispersing some of the $800 million in reserves to state agencies, including the Health Ministry. He said he did not know the total amount dispersed so far.

However, earlier this week, Sok Sensan told the Khmer Times that the ministry had dispersed $30 million to the Health Ministry for Covid-19 response efforts.

Ministries would have to submit an application detailing how establishments under their jurisdiction have been impacted by the global slowdown in order to access funds, Sok Sensan said.

He said the $800 million figure was an estimate that could be adjusted in response to global prices, noting that the Cambodian economy had not hit “crisis” levels yet. Most of the aid would go toward industries that are projected to take the biggest hit, including the garment and tourism sectors, and other key industries such as construction, real estate, and small and medium enterprises.

Sok Sensan, of the Finance Ministry, said that $300 to $400 million of the allocated money came from instant cost savings after ministries and related establishments sheared unnecessary expenses off their 2020 budgets, which Hun Sen mandated in a speech last week.

“Previously, we adopted a budget for how much each ministry and establishment can spend [this year], and now we introduced measures to reduce their unnecessary expenses,” Sok Sensan said.

The rest of Cambodia’s national reserves came from savings from economic growth over the past 20 years, according to Sok Sensan. He said he did not know the total value of national reserves offhand, but the budget was based on Cambodia’s income and not supplemented by foreign sources.

In its November economic update, the World Bank noted that the Cambodian government had a “relatively large fiscal stimulus” reserved to offset impacts of a loss of the “Everything But Arms” duty-free trade preferences with the E.U. The trade scheme is set to be partially withdrawn in August due to what the E.U. has called “serious and systematic” human rights violations by Cambodia.

When asked about the stimulus, Sok Sensan referred questions to the National Bank of Cambodia, saying it oversaw international capital reserves. A National Bank official could not be reached for comment on Monday.