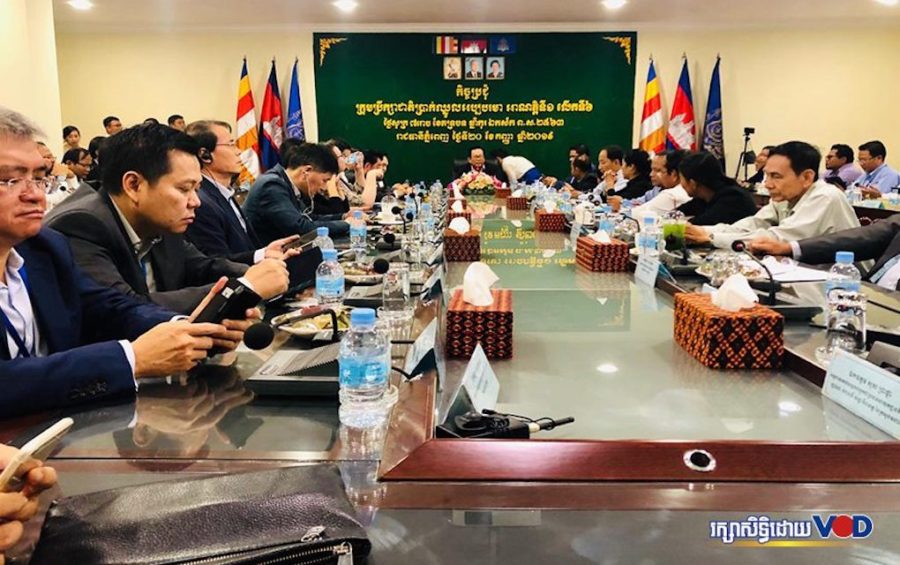 A National Minimum Wage Council meeting on the minimum wage for garment workers for 2020 at the Labor Ministry in Phnom Penh on September 20, 2019. (Khut Sokun/VOD)

Garment factory workers will receive a minimum wage of $190 a month from January 1, 2020, an increase of $8, the Labor Ministry announced on Friday.

Labor Minister Ith Sam Heng told reporters that the National Minimum Wage Council, made up of 17 representatives each from the government, employers and unions, voted for $187, with Prime Minister Hun Sen adding an annual extra on top.

“I think this is a gift that our tripartite body prepared for the workers, and a gift that our Samdech prime minister offered to workers and our compatriots before Pchum Ben day,” Sam Heng said.

During negotiations on Wednesday, unions called for the wage to be set at $195, while employers pushed for $186 and the government $187.

Nang Sothy, a representative for the Garment Manufacturers Association in Cambodia, welcomed the increase, saying it would help improve workers’ living conditions, but asked that the government decrease income taxes, reduce electricity costs and increase worker productivity by further reducing the number of holidays.

“We already know that our country needs investment. In particular, our wages have increased to a lot more than Laos already. Vietnam is just $190. We are equal to Vietnam now,” Sothy said. “They have fewer holidays than us. Their infrastructure is better than us. Still, our investors will work hard … to build the national economy.”

Vietnamese minimum wages vary by province, ranging from $125 to $179 for 2020, according to VN Express. The 5.5 percent average increase this year is among the lowest increases in recent years, Bloomberg Tax said.

Ath Thorn, president of the Cambodian Labour Confederation, however, said he was not satisfied with the minimum wage increase.

In light of inflation, the raise was not enough to improve workers’ living conditions, he said, adding that unions had requested a $13 increase but received only $8.

“This number is a number that can help reduce some of their expenses, but it will not allow them to make a proper living,” Thorn said.

Recent research has suggested that an appropriate minimum wage was more than $200 a month, he said.

Unions have asked for a $225 “minimum wage,” according to the Thomson Reuters Foundation.  The Asia Floor Wage campaign, meanwhile, calls for a living wage in Cambodia of about $470 a month.

Sam Heng, the minister, said the unions had asked for many other benefits, such as provided lunches, higher travel allowances, reduced utilities costs and more.

Employers, meanwhile, had asked for reduced taxes and electricity costs, he said, noting that the government would take the requests under consideration.

The garment sector, which employs at least 700,000 workers, is the only industry with a fixed minimum wage, leading labor advocates in the travel, construction, service, agriculture and other sectors to push for a wage floor earlier this year.