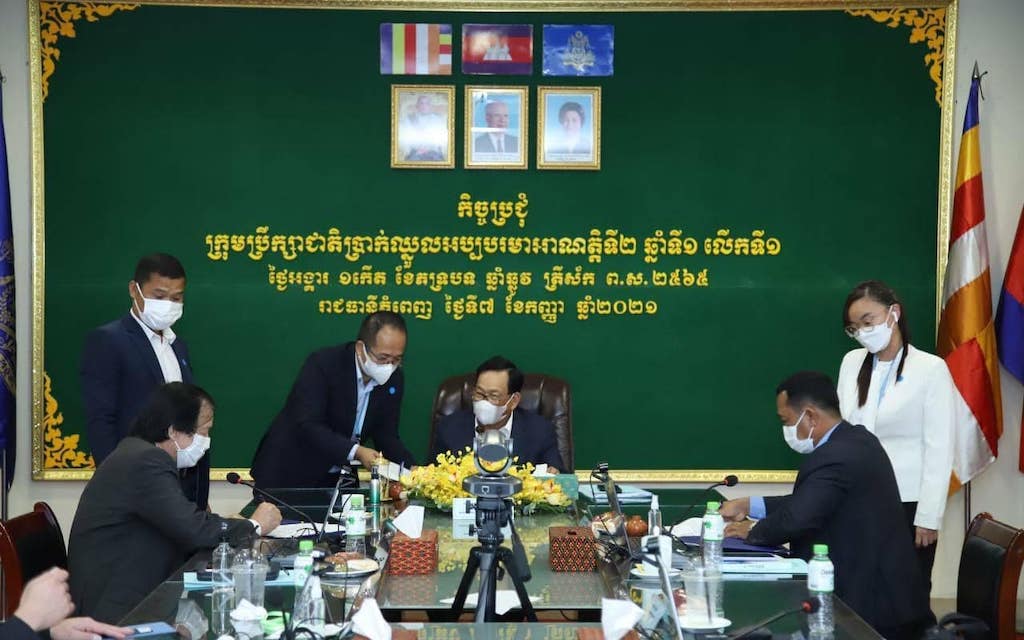 Labor Minister Ith Samheng meets with worker and employer representatives on Tuesday, in a photo posted on the minister’s Facebook page.

Unions, employers and the state began minimum wage talks for the garment sector on Tuesday, swapping research reports that will be the basis of negotiations as workers seek a raise from $192 a month to $214.2.

Tuesday’s meeting, held by video conference, was the first of four weekly sessions planned for the tripartite negotiations, according to a document signed by the Labor Minister Ith Samheng.

The sector faced a steep drop in international orders last year as the coronavirus pandemic spread worldwide, leading to more than 150,000 job losses, according to the employers’ association. Factories were further hit hard by Covid-19 outbreaks as case numbers surged in the country earlier this year.

Yang Sotheara, 26, a worker at Y&W Garment in Phnom Penh’s Dangkao district, said on Tuesday that she didn’t know how the talks would progress, but hoped for the $22.2 raise being pushed by unions.

“I will be happy if we get that amount. We are working every day expecting more wages,” Sotheara said. She has a 5-year-old son, and expenses including rent comes to around $150 every month, she said.

“We have so little left so if we fall sick, we will have nothing left during some months,” she said.

Phuong Ra, a worker at Morning Glory Garment Enterprise in Kamboul district, said living expenses were on the rise, and a raise would help alleviate the pressure.

“The food prices are higher than before and we rely on overtime work. If we don’t have overtime, it will not be enough,” Ra said.

Ath Thorn, president of Cambodian Labor Confederation, said on Tuesday afternoon that the union had presented its position while the Labor Ministry shared its research reports about the economic situation.

The ministry had yet to propose a potential minimum wage, he said.

“We are discussing the reports to verify whether our report and the ministry’s report match each other or not. Then we will have a discussion among unions,” Thorn said, adding that they would submit their proposal for the $22.2 raise once they go through the reports.

“We’re still optimistic that there can be a discussion, but employers don’t want to have any increase,” Thorn said, noting that the employer side had spoken of ongoing economic challenges, including Covid-19.

Garment Manufacturers Association in Cambodia secretary-general Ken Loo said Tuesday that employers were against any raise in the minimum wage. He said factories were incurring higher costs, including on testing workers, and an increased wage was not feasible in the current economic situation.

“We will show the statistics that we have and continue the negotiations,” Loo said. “We say that based on the situation, it should not be increased.”

Pav Sina, president of the Collective Union of Movement of Workers, said on Monday that the unions’ request for a 11.6 percent raise was based on rising food prices and recovering exports.

He added that workers had lost benefits starting this year due to the reduction in the number of public holidays.

“By this hour, the employer side and the ministry must know about the difficulties of the workers,” Sina said. “This amount just helps partly ease the burdens on workers, who have been seriously affected since 2020. So I think both employers and the ministry should think more about their suffering after their benefits were lost.”

Fa Saly, president of the National Trade Union Confederation, said workers needed encouragement, as they had “tried hard both day and night, working overtime and on holidays while facing Covid-19. And they still tried hard to do this work without fearing infection from the disease.”

Khun Tharo, program officer at labor rights group Central, said the process still lacked transparency as the final decision would be made by the prime minister through a political mechanism.

Furthermore, the so-called workers’ request was given by a select group of union representatives, he said.

“It gets called the number that has been requested by workers. But unions within the wage negotiation are unions that favor the government, and do not protect the real benefits of the workers,” Tharo said.