Ministry to US: Kem Sokha in ‘Comfort of His Home’ 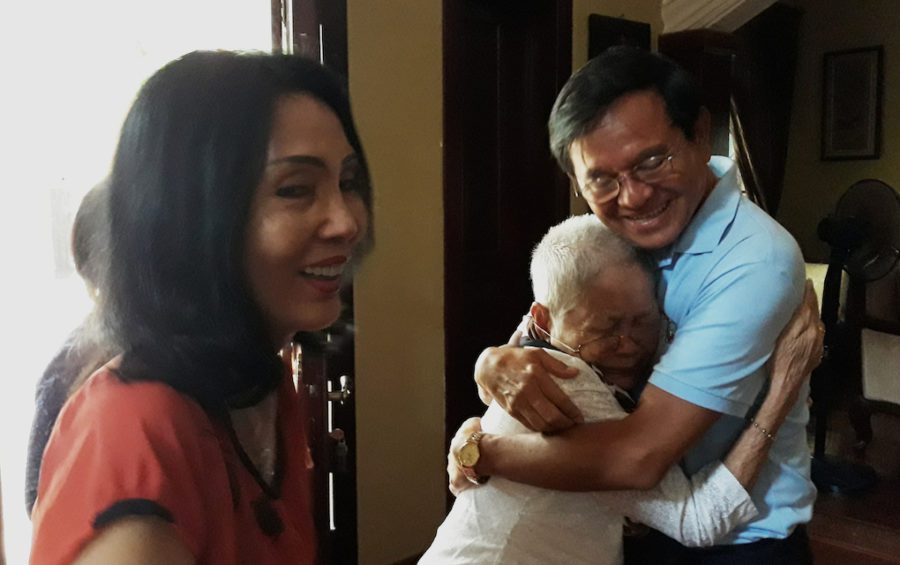 Kem Sokha (right), with his wife Te Chanmono (left) and his mother Sao Nget, at his Phnom Penh home the day after he was released from Correctional Center 3 prison in September 2018. (Chhea Bunnarith)

Cambodia’s Foreign Affairs Ministry on Tuesday responded to a video from the U.S. State Department, which called opposition leader Kem Sokha’s ongoing detention without trial “baseless,” by noting that Sokha had been released from prison to the “comfort of his home” a year ago.

Foreign governments, the ministry said, should refrain from interfering in Cambodia’s affairs “under the pretext of human rights and democracy.”

Sokha was arrested more than two years ago over accusations of colluding with the U.S. to overthrow the government — allegations which Sokha denies. His party, the main opposition Cambodia National Rescue Party (CNRP), was dissolved in November 2017, eight months ahead of a national election.

“We wish to remind that the failed attempt to push for regime change through undemocratic means is not the exercise of fundamental human rights and democracy,” the ministry said in a statement.

The government was within its sovereign rights to “take the necessary legal measures against individuals and entities” who violate the law so that it may protect national security and ensure the rule of law, it added.

In addition, the ministry said, “Since 9 September 2018, Kem Sokha was already released for humanitarian reason[s] to remain in the comfort of his home with his family under court surveillance.”

Sokha is currently under de facto house arrest after being jailed for a year. The government has justified its charges against him for “conspiring with a foreign power” with a video of a 2013 speech he gave in Melbourne.

In the video, according to the government’s transcript of the speech, he discusses receiving support from the U.S. since he entered politics in 1993 and says he was advised to pursue grassroots support in the model of the 2000 overthrow of Yugoslavian dictator Slobodan Milosevic.

On Tuesday, Morgan Ortagus, spokeswoman for the U.S. State Department, said in a one-minute video, with subtitles in both English and Khmer, that the Cambodian government had failed to offer any credible evidence to support its accusations against Sokha.

“The United States again calls upon the Cambodian government to drop all charges against Kem Sokha, restore his civil political rights and free all those who are arbitrarily detained,” Ortagus said in the video, which was posted on the U.S. Embassy in Phnom Penh’s Facebook page.

The U.S. has repeatedly called for the case against Sokha to be dropped, while criticizing last year’s election as neither free nor fair for being held without a credible political opposition. Prime Minister Hun Sen’s ruling Cambodian People’s Party won all 125 seats in the National Assembly.

Mu Sochua, former vice-president of the CNRP, agreed with the U.S.’s view, adding that Washington had a duty to observe the democratic process in Cambodia in accordance with the spirit of the Paris Peace Accords of which the U.S. is a signatory.

Sochua said Sokha’s arrest and the CNRP’s dissolution was unjust and not accepted by national and international communities.

“[Regarding] Hun Sen’s government, we have no doubt about the denial of all reports and statements that criticize the court system, which is a tool of Mr. Hun Sen that destroys democracy and violates human rights,” she said.

“We still demand for the immediate and unconditional release of President Kem Sokha,” she added.

The analyst said there is no benefit for Cambodia if the government doesn’t negotiate with the outlawed opposition party and be open to reconciliation.

“Any reply to the U.S. that could harm the nation’s welfare, I think we should soften the behavior to prevent the problem from becoming even more difficult,” Srey Sros said, citing Cambodia’s trade preferences with the U.S. and the E.U., which are currently under review over political and human rights concerns.

The Garment Manufacturers Association in Cambodia has noted the potential impact of losing tariff- and duty-free access to the E.U., which would threaten the nation’s key garment sector. It comprises 75 percent of the country’s total exports, 750,000 workers and income to families totaling 3 million people.

The European Commission in February announced the launching of a formal procedure to suspend Cambodia’s trade preferences, noting that it had found evidence of “serious and systematic violations of core human rights and labour rights in Cambodia, in particular of the rights to political participation as well as of the freedoms of assembly, expression and association.”

Rhona Smith, the special rapporteur on human rights in Cambodia, raised in a report to the U.N. Human Rights Council during this year’s 42nd meeting that within a year from the July 2018 elections, the nation’s rights situation remained “dominated by the repression of political rights.”

In the same report, Smith called on the government to release Sokha from detention and “conclude the investigation of the charges against him swifty or drop the charges.”

However, the Foreign Affairs Ministry on Tuesday told international actors to stay out of Cambodia’s affairs.

According to the ministry statement, the government urged “foreign politicians and administrations” to adhere to “rule-based multilateralism and the basic norms governing international relations … to respect Cambodia’s sovereignty and show utmost restraint from interesting in Cambodia’s internal affairs under the pretext of human rights and democracy.”