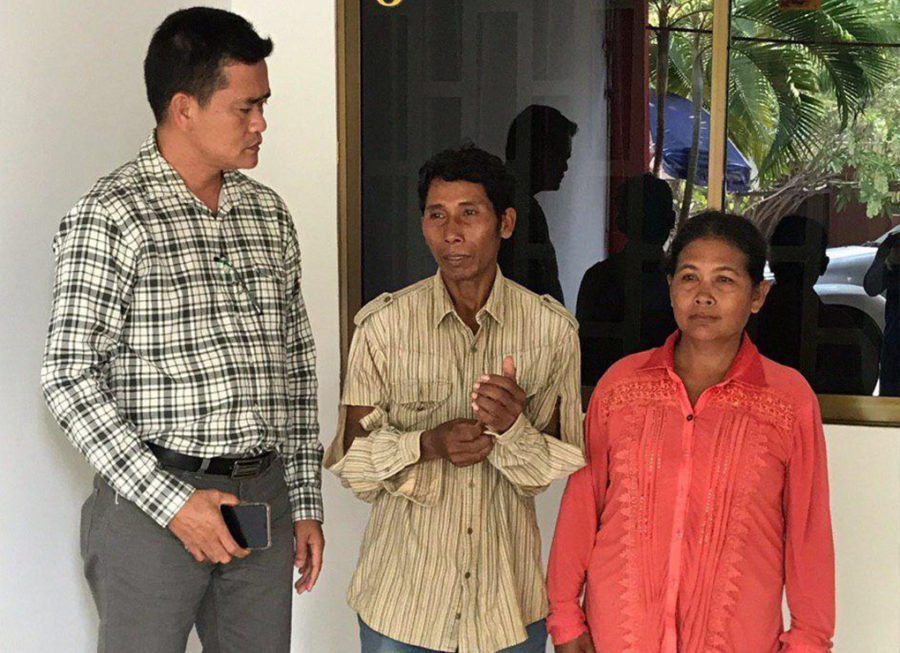 A man who went missing after being arrested over a land dispute in Preah Vihear province in January has been found hiding at a relative’s house.

Sum Moeun was one of 15 villagers arrested by soldiers from the military’s Brigade 6 in Choam Khsan district on January 20 but officials said he escaped while eating at a noodle restaurant with police.

His wife said after his disappearance that she feared for his life. But after he turned up at a relative’s home in Preah Sihanouk province on Sunday, she told VOD that he had fled into the forest out of fear.

“He was afraid,” Phu Phim Mao said. “He was afraid of being arrested again and being mistreated. One of his arms does not work now. It is disabled. He was beaten up until the bone come out.”

“Now that he has some medicine, he can get it to move a little bit.”

Officials from the Preah Vihear Provincial Court repeatedly rejected accusations that they were responsible for his disappearance and said they believed unnamed civil society groups had helped him escape.

“The wife seems to be hiding things and being advised to say something by someone,” Chanda said, adding that written complaints made by Phim Mao while her husband was missing made it appear that she had help.

“The preparation of the paperwork seems to have been set up; there was someone [else] who wrote it. We can see that. Someone that wrote it and as soon as the letter arrived at the provincial administration, even before I have received it, some media already had the information,” he said.

“From this point, I think we can conclude that it was a set-up.”

However, Phim Mao rejected the accusations.

“He met with the U.N. yesterday and said that no one hid him. He ran and kept hiding in the forest,” she said. “Once he recovered, he got up and begged people to buy him some medicine and food. He did not know how difficult it was for his wife; he did not know his wife was looking for him.”

Lor Chan, a provincial coordinator for local rights group Adhoc, said his group had assisted the family in making contact with officials, in line with its regular work helping citizens whose rights may have been abused.

“Sum Moeun’s family did come to ask for help from civil society groups but civil society has no authority to pronounce or decide [on cases] in the place of authorities,” Chan said, denying any wrongdoing. “Civil society just follows, monitors, observes and helps with legal consultations.”

Chanda, the provincial governor, said that authorities would not seek to rearrest Moeun now that he was found, even though the other 14 villagers arrested on January 20 were still in pre-trial detention.

On Jan. 31, more than 200 people involved in a land dispute with the Metrei Pheap company gathered and submitted a petition to Prime Minister Hun Sen seeking his intervention to secure the release of the 14 other villagers and find a resolution for their land dispute.

According to the villagers, Metrei Pheap received a 8,520-hectare land concession from the government in 2012 to grow rubber and farm domestic animals. It covers land in Choam Khsan and Kulen districts — including 559 hectares of land that was occupied by 339 families.