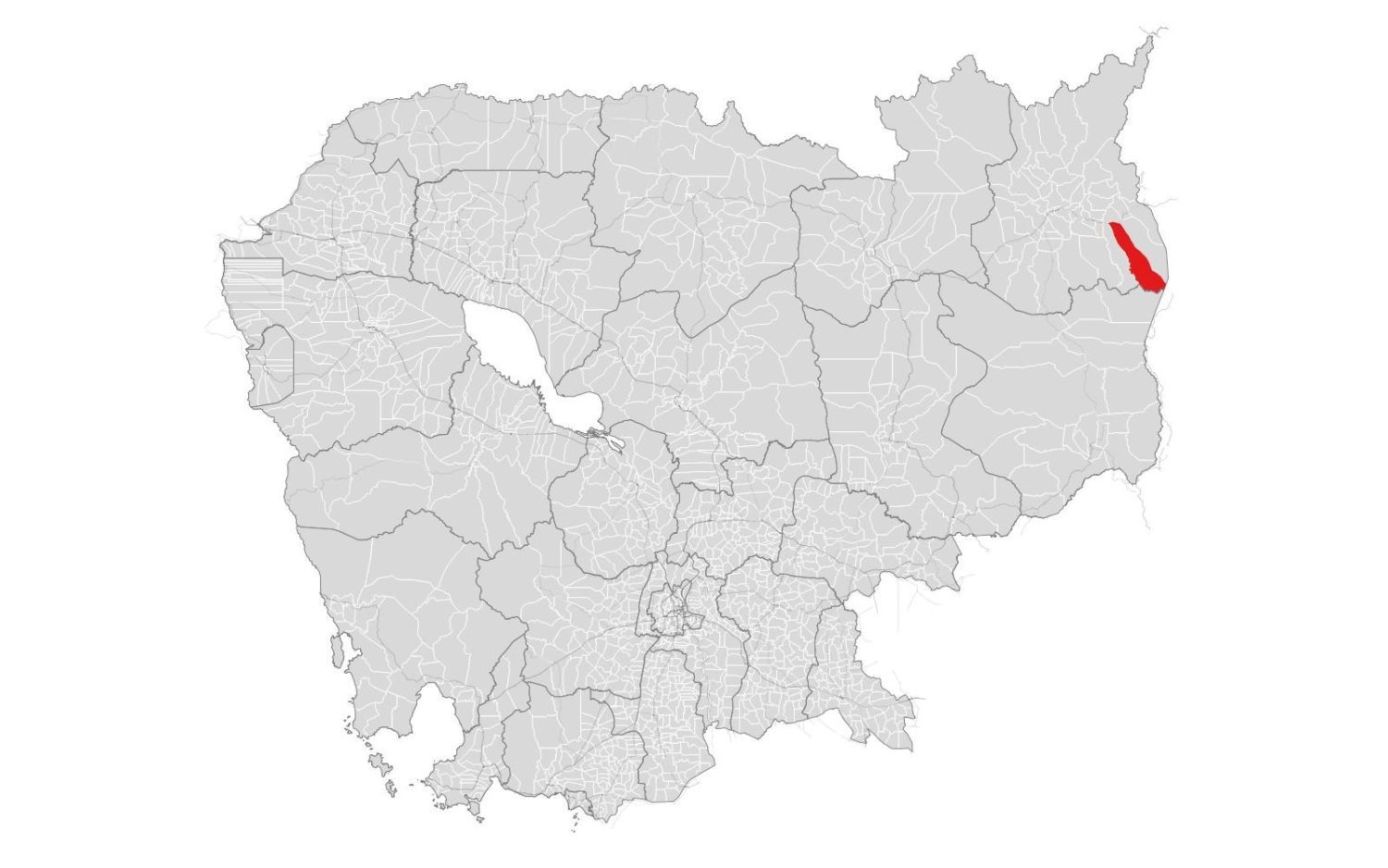 In early April last year, residents and local officials met in Ratanakirri’s Pate commune. Covid-19 cases were making their first steep increase in the capital of Phnom Penh, more than 500 kilometers away. But residents were not going to wait for the government intervention. They decided to lock themselves down.

Two makeshift wooden gates were put up on the two roads leading to the commune’s four villages. Two residents from the commune guarded the gates on rotation for 15 days in mid-April. Sor Plorn volunteered to be a guard.

“We guarded and prevented people from leaving or entering, even the ice cream or vegetable sellers,” he said sitting at the southern edge of Kong Thom village.

Plorn gives the commune chief, Chhay Thy, credit for coming up with the idea and thinks it protected village residents. Thy also organized sessions on personal hygiene, he added. But that’s the extent of Plorn’s praise for the CPP commune chief.

“I think most people do not like the work of Chhay Thy,” Plorn said. “We want to change the commune chief, we want a Jarai candidate.”

Thy was a popular human rights defender with local NGO Adhoc for his vocal criticism of the Cambodian government’s complicity in land disputes affecting indigenous communities in the northeastern province of Ratanakiri.

The human rights worker shocked his organization and others in civil society when he announced in January 2017 that he would run for commune chief of Pate, the hometown of his ethnic Jarai wife. And he was running for his bete noire, the ruling Cambodian People’s Party.

The Ratanakiri resident won a narrow victory in June 2017, beating the second-placed Grassroots Democratic Party by less than a dozen votes. The CNRP, which had won the commune in 2012 — under the banner of the Sam Rainsy Party — came in a relatively distant third.

Thy sat at the commune office last Tuesday, two other officials working in one of the offices adjacent to the central atrium. Thy is dressed in the beige commune uniform and buoyant about his achievements over the past five years.

During the course of an hourlong interview, the incumbent chief dismisses any and all accusations against him from village residents and his political opponents, employing the argument that criticism was coming only from opposition quarters.

“So, what [village residents] say is criticism of the opposition group. They don’t speak the truth because just yesterday I worked from the light to dark.”

Thy is very proud of the two roads he said he used his “innovation” to build, but gave little else as major achievements for his first term. The commune chief said he had built one concrete road, located at a road leading from O’Yadaw district to the commune.

The concrete road is no more than 300 meters and barely enters the commune, but adjoins one of three houses the commune chief has in the province.

“Now I have stopped making red pebble roads; only concrete roads. Even though it is little, it is for the long term,” Thy said.

Thy said he also helped build a road from Kong Thom village to nearby Kong Puk. There used to be a red soil path between the two villages but he negotiated with landowners on either side  to widen the road.

The CPP chief said previous chiefs did little with commune budgets and it was his rapport with residents that enabled the construction of roads in the locality.

Village residents acknowledged the road construction over five years in the commune, but had a raft of complaints against Thy.

Resident Sev Soul said the commune chief’s performance was “acceptable” but that commune works would have been smoother had residents voted for a chief from the Jarai community.

“He, as a commune chief, was OK, but I want the one who is Jarai. It is easier to speak with [the chief] when making documents,” Soul said.

Villagers said they were unhappy with Thy’s slow delivery of services and the loss of land to a nearby gold mining operation by Mesco Gold. Villagers say they have lost land to the company, though Thy claims that the dispute was resolved in 2017, which is why he found it astounding that protests have persisted.

He enters a long-winded answer recollecting a protest by residents at the commune hall, where around 400 people were inside the premises demanding a resolution to the dispute. Villagers told VOD that Thy had accused them of incitement — the CPP government’s catchall charge against those expressing dissent.

Thy denied the accusation, instead alleging the residents had gotten irate. “After I gave an explanation, they got mad at us, saying we are with the company,” he said, adding that he was at the forefront of fighting the company’s incursions into residents’ land.

As for the Jarai issue, Thy said not being from the community and not knowing the local language was moot, comparing his Khmer ethnicity to indigenous students in his commune who did well in highschool examinations despite being Jarai.

“In this area, the [students] graduated with the grade 12 examination and some were able to get grade C in the exam. So, it is not about language,” Thy said. “I don’t believe that language is an issue.”

Thy then resumed talking about road construction.

The CPP commune chief won a closely fought battle, with the GDP giving a strong showing at the 2017 election, its first election ever.

Long Tith, 34, is the GDP’s second-ranked candidate for next month’s election. The ethnic Jarai resident of the commune is soft spoken and thrifty with his words, in sharp contrast to Thy’s verbose answers.

Tith too wants to improve local infrastructure like the commune’s roads, help farmers’ access to markets to sell agricultural products, and solve any pending disputes in the area.

“I joined as a candidate because the people are having problems with not enough roads and the land dispute with the mining company,” he said.

Asked about the situation of roads in the commune, he only repeated that he would build roads using the commune budget.

Another challenger for Thy’s seat is the Candlelight Party’s Rmam Kham Phorn. Kham Phorn was brought in as the CNRP candidate in 2017 after his cousin, Rmam Yuot, was the Sam Rainsy Party commune chief in 2012 but was replaced for being unpopular in the commune.

Yuot also filed a complaint against two Cambodia Daily reporters who were reporting the commune’s position as the only opposition victory in Ratanakiri province in 2012. The case was taken to the Appeal Court where the court ruled in favor of the lower court’s decision to drop the charges. A lawyer for the reporting duo — who had to leave the country after the charges were filed — said no further appeal had been filed by deadline, and he had made a request earlier this month for a final decision.

Yuot was not at his home in Pate last week, with Kham Phorn saying the former commune chief was likely in his field. Kham Phorn wants to move on from Yuot and the controversy, and instead wants to focus on the upcoming election.

Kham Phorn said there was a yearning for change in the commune and said Thy’s record — especially criticism of his only having built a few roads in the last five years — had fueled calls for a “new leader.”

He was confident the new leader would be the Candlelight Party, even though the GDP had outperformed the CNRP in 2017.

“When I met people, a lot of people said they supported the Candlelight Party. But the GDP does not have much support in Ratanakiri; this is the only commune that the GDP has [in the province].”

Back at the commune office, Thy is unperturbed by his opponents. He will focus on road building, improving services for the people and was unfazed by criticisms heard across the commune.

“I am worried about nothing because the people have received a lot of benefits,” he said. “I still believe that they support me because for five years I have stayed directly with the people.”