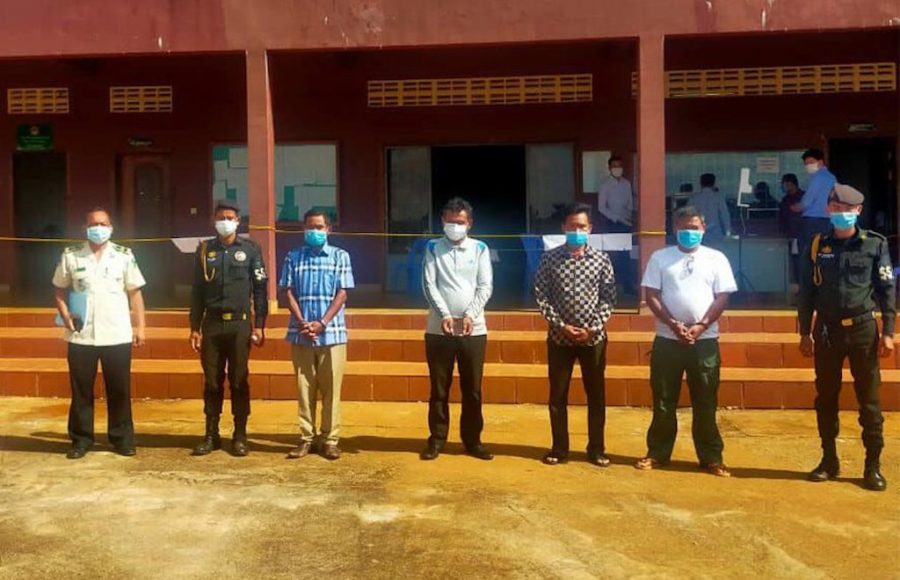 Some of the defendants are photographed in Mondulkiri’s Keo Seia district, in an undated photo posted to the Military Police’s Facebook page.

The Mondulkiri Provincial Court has charged six military personnel and three police officials for their alleged part in a conspiracy to export illegal timber to Vietnam.

In a detention order, signed on June 26 and viewed by VOD on Tuesday, an investigating judge charged six military and three police officials and sent them to provincial prison for pretrial detention for violations of the Forestry Law. Eight were sent to pretrial detention and one was placed under court supervision, according to the document.

The five military officials in detention are Ouk Nakhay, Lek Nhek, Phorn Sophal, Eang Chandy and Van Chantheary — all of whom are stationed with border guard units. Duong Chanvirak is now under court supervision. The three police officers sent to prison are Prum Vannak, Leang Phearoth and Phat Soleng.

According to the detention order, they have been charged with “conspiracy to export unlicensed timber” under Article 27 of the Criminal Code and Article 89 of the Forestry Law, Article 100 of the Forestry Law for assisting the business of forestry products and Article 29 of the Immigration Law for “facilitating entry into Cambodia.”

Eng Hy, spokesperson for the National Commission for the Prevention and Suppression of Natural Resources Crimes, did not want to comment about the detention and directed a reporter to the Military Police’s Facebook page.

He said, “That is all because the investigation is ongoing. I cannot answer.”

Military Police Facebook posts from June 25 and 26 say that the nine officials were detained for forestry crimes in the O’Huch border area in Keo Seima district. The nine allegedly conspired with Vietnamese nationals to transport timber, and the operation led to the confiscation of 252 logs, two tractors, two motorcycles and one chainsaw.

Pen Bonnar, rights group Adhoc’s community empowerment officer, said the detentions were a welcome move, but in the past there had been multiple cases where local officials were involved but that they had not been arrested.

“We look at this as a good example. But it is only against [low-ranking] officials,” he said. “For senior officials, tycoons and some influential traders, nothing was done.”

“In the past, we have seen that not only high-ranking officials and tycoons, but even officials of the Mondulkiri Provincial Court were involved in forestry crimes.”