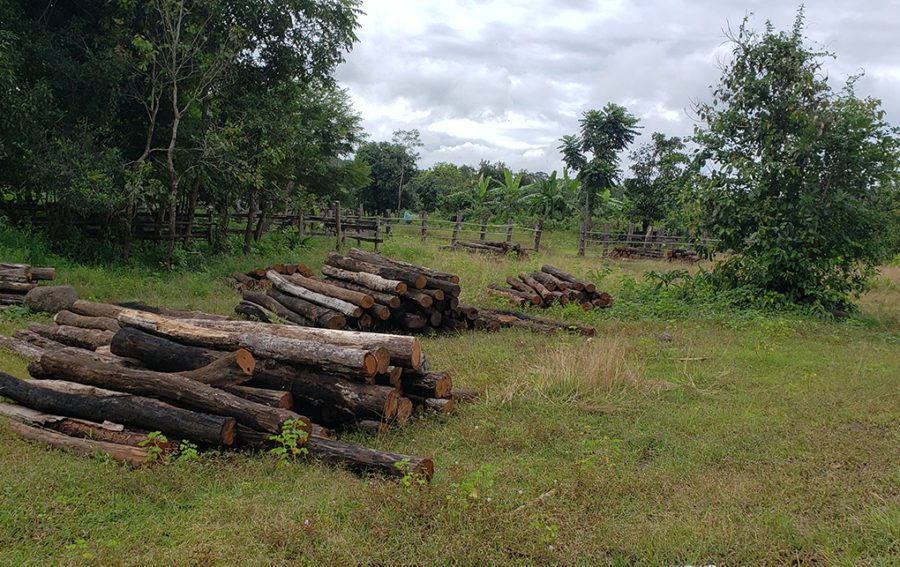 A stack of cut logs on a property outside Mondulkiri province’s Phnom Prich Wildlife Sanctuary on October 16, 2020. (Danielle Keeton-Olsen/VOD)

The Environment Ministry has ordered provincial officials to fire the Srepok Wildlife Sanctuary chief in Mondulkiri province over alleged abuses of power, including threatening local people who were collecting firewood.

According to a Ministry document dated October 20 addressed to the Mondulkiri provincial governor, Srepok Wildlife Sanctuary chief Peth Pheaktra committed professional misconduct and used his influence and power in his role to “threaten and abuse people’s rights that impact the honor and dignity of the civil servant.”

“In this context, the Ministry of Environment requests the provincial governor to terminate Peth Pheaktra as the head of Srepok Wildlife Sanctuary … Peth Pheaktra must be present every working day and must obey the law.”

Local news station Hang Meas HDTV reported that villagers have complained of forest administration officials threatening and extorting them as they cut down small amounts of firewood to support their families.

Hang Meas also showed photos of receipts of alleged money transfers to Peth Pheaktra’s phone, one for 400,000 riel and another for 1 million riel (about $96 and $240 respectively), claiming they were connected to the local logging business.

“The decision of the Ministry is based on the documents, evidence and consideration of the Board of Discipline clearly and comprehensively,” said Environment Ministry spokesperson Neth Pheaktra.

“We do not see him making any mistakes and he is a serious person and I know he abstains from eating wildlife,” he said. “He is not a showoff-y person or rich like other officials who have (nice) houses, motors and cars.”

He added that he had requested the Ministry to reconsider his firing and look into people conducting illegal logging:  “For me, he is better than other officials in protecting forest and natural resources.”

Mondulkiri deputy governor Cheak Mengheang said he had not yet seen the letter and that removing Pheaktra was up to the governor, not him. If he were to be replaced, he added, there would be a public ceremony.

Mondulkiri Provincial Administration spokesperson Neang Vannak could not be reached for comment.