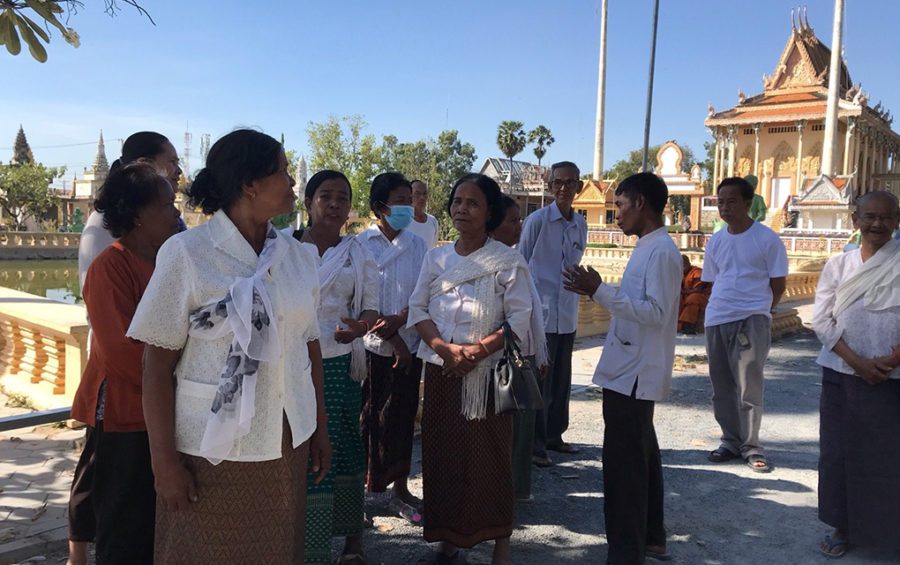 Six nuns stand in protest after a neighbor cleared land they claim is theirs at Wat Thormatrey pagoda in Phnom Penh’s Dangkao district on January 6, 2021. (Mech Dara/VOD)

About 20 monks and nuns gathered in protest in front of their Phnom Penh pagoda on Wednesday to stop earthworks on a plot they claim belongs to them, pointing to orders from the Council of Ministers and a deputy prime minister.

The Supreme Court, however, has ruled in favor of the private individuals who are looking to further develop the land and who have traced their ownership through a series of sales they say goes back to occupants from 1979.

Wat Thormatrey, in Dangkao district’s Prey Sar commune, has a 1.55-hectare plot in dispute since the 1990s, with the government intervening a decade ago and the courts making their contrary ruling in recent years.

On Wednesday, pagoda leaders decried “collusion” and the burying of evidence as they called for the prime minister’s intervention.

“If it was not the pagoda land, I would have been in jail a long time ago,” said pagoda committee head Chey Sophal of the years of disputes. “If I wasn’t sure of it, I wouldn’t dare. I’m afraid of them because my life is not made from steel.”

People involved with the pagoda were moved to protest after work started on the plot on December 31, he said, adding that the pagoda wanted to see a school built on the land.

Muong Samon, the pagoda’s lay priest, or achar, and a former commune chief, said monks and nuns had protested after dozens of trees were cleared from the plot in recent days, and because they did not accept the court’s ruling.

“I was very fed up with the court and they look down on me about everything,” Samon said. “We tried to show the documents, but the court claimed we were trying to fabricate them.”

However, there is already a house on the plot, and inside, Khy Choeu, one of the individuals claiming ownership, said the court had clearly ruled that the land was theirs.

“The pagoda lied,” Choeu said. “I bought it from people after it had been sold on through many buyers.”

According to a Phnom Penh Municipal Court summary of the case, provided by both parties in the dispute, the land was sold in 2006 to one of the current owners, Bun Meng, for $160,000. It previously went through two other owners after being sold by the original occupants after the fall of the Khmer Rouge in 1979, according to the summary.

Fences were built in 2007, and in 2008, the Council of Ministers issued an order to give the land to the pagoda, the document says.

The Council of Ministers order, dated December 24, 2008, tells the Phnom Penh governor to issue a land title to Wat Thormatrey.

The court summary says the private owners then filed complaints to the courts, Justice Ministry, National Assembly and Council of Ministers but received no solution.

In 2013, a document signed by Deputy Prime Minister Bin Chhin again asks local authorities to give the land to the pagoda.

But the Phnom Penh Municipal Court eventually took on the case, and ruled in 2017 in favor of Meng and Choeu. After going through the Appeal Court, the Supreme Court again ruled in favor of the two private individuals in 2018.

Justice Ministry spokesperson Chin Malin did not respond to questions, including whether government orders or court rulings should take precedence.