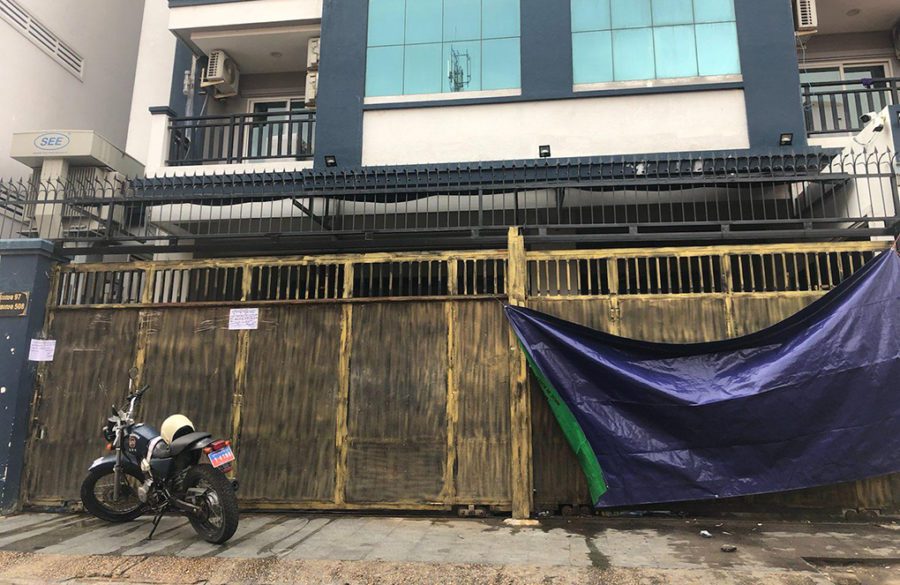 A motorbike with army plates and a tarp sit in front the gate of a condominium where military police arrested more than 100 people in Phnom Penh’s Phsar Doeum Thkov commune on August 23, 2021. (Mech Dara/VOD)

Military police raided a Chamkarmon district condominium building in the capital around midday Saturday and arrested more than 100 Chinese nationals, a spokesperson said.

National military police spokesperson Eng Hy would not disclose the reason for the arrests or further details on Monday, referring questions to the prosecutor. Plong Sophal, spokesperson for the Phnom Penh Municipal Court prosecutors, said he had yet to receive the cases.

Phnom Penh military police chief Rath Sreng could not be reached for comment.

A video of the raid shows officers armed with assault rifles descending on the residential neighborhood. At least two large military police buses were filled with inhabitants from the building.

Around the Phsar Doeum Thkov commune residential building on Monday, one military police officer remained on guard amid the bustle of traffic.

Nearby, a woman selling fruits and snacks from a stall said she had seen some people from the building picking up delivered food, but otherwise had seen no one entering or leaving the building in the past.

“We’ve never seen them going out,” she said.

On the gate there were attached two pieces of paper. One said: “After an investigation, we have decided to temporarily close the condo from today, August 21, 2021.”