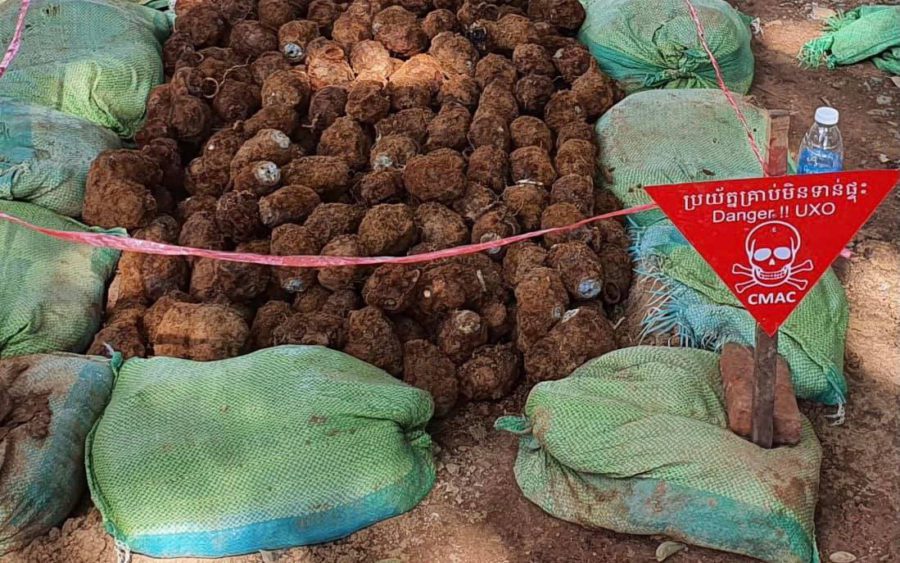 More than 400 grenades, still full, were removed from a Siem Reap city school and placed behind a fence, in a photo posted to Heng Ratana’s Facebook page on July 13, 2021.

A cable company digging around a Siem Reap high school fence found a cache of old unexploded grenades, alerting demining experts who have since recovered more than 400 grenades from the site.

The location was understood to be a munitions storehouse during the Khmer Rouge era, and soldiers had likely buried the grenades there, officials said. The grenades were still full of powder, and could have exploded if disturbed, they said, as one parent in the neighborhood spoke of concerns about sending her child to the school next term.

Ean Sothea, the head of the Cambodian Mine Action Center’s Demining Unit 4 in Siem Reap and Kampong Thom provinces, said cable company employees were digging the ground near a fence at the 10 January 1979 High School on Saturday when they found the munitions.

Deminers found 325 unexploded grenades on Saturday and a further 80 on Monday at the school, near the Angkor Hospital for Children in Siem Reap city’s Svay Dangkum commune, Sothea said on Tuesday.

“Based on our conclusions, firstly, it could be a former base or storehouse, and, secondly, they could have been buried,” Sothea added on Wednesday.

The area had been swept for unexploded ordnance three to five years ago after being alerted by commune police, he said.

But the grenades were not found at the time.

“They are still good and have full powder,” Sothea said. “If one digs and touches them, they could explode.”

He added that the clearing of the site was now complete.

Sok Seyha, director of the provincial telecommunications department, said on Wednesday that hired subcontractors had been digging up the sidewalk to lay a cable as part of Siem Reap city’s ongoing roads reconstruction project.

The workers initially found seven grenades before alerting CMAC, he said. It was thought that the Khmer rouge stored their munitions there to fight Lon Nol soldiers in the 1970s, Seyha said.

Heng Ratana, CMAC’s director, said in a social media post that the grenades were “No. 36” British hand grenades, of a lineage that has been manufactured and in use since 1915.

Hin Ly, 36, a resident of Svay Dangkum commune, said she had not heard about the discovery of grenades, but was afraid as one of her children would start at the 10 January 1979 High School next year.

“I want the authorities to clear it,” she said. “We are worried and every parent has the same worries.”