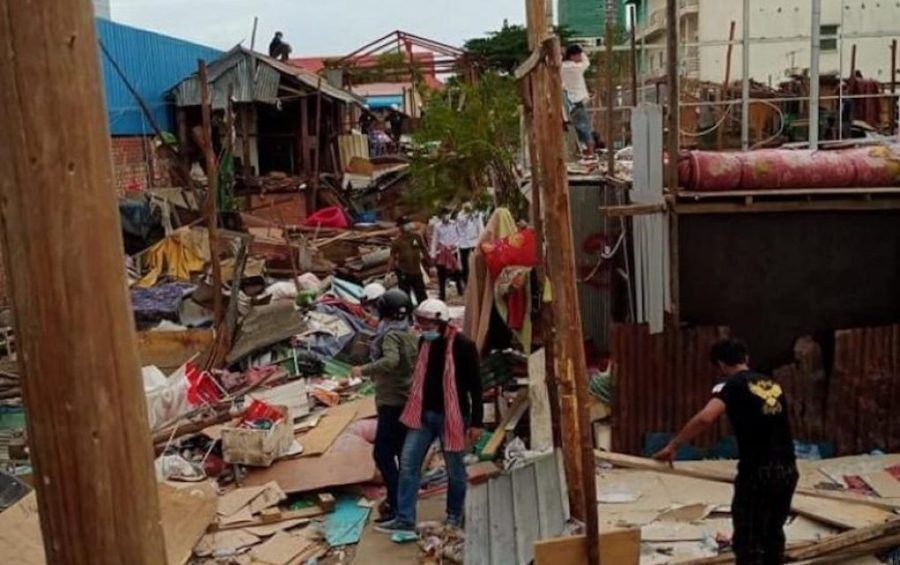 More than 50 families who were evicted from their homes near Phnom Penh’s Sovanna Shopping Center have asked for land on which to resettle after they said City Hall did not offer them fair compensation.

Sambath Phalla, a 48-year-old resident of the Banteay Sleok community, said authorities required 138 families to remove their houses in Boeng Keng Kang district’s Tumnop Toek commune on Saturday and Sunday because the dwellings were blocking a public road.

Phalla said that 87 families were granted land in Kandal province, but the grandmother and her five adult children and about 50 other families did not receive land or compensation after their eviction from an area in which some lived for decades.

“I lived there since my children were young and now they are adults, and now my children have children,” she said. “I ask the municipal governor to give us just 4-by-6 meters of land to use in order to have proper shelter, and I will accept that and not protest.”

The spokesperson said about 87 families had been relocated to Khsach Kandal district’s Vihear Suor commune in Kandal, and that the area already has roads, tap water and electricity infrastructure.

He said that 51 families had been excluded from the deal he negotiated because they lived in shacks rather than more permanent houses and some families wanted more dwellings than they currently had in order to divide up larger households.

“There should be a fair solution for the involved people because authorities need to avoid protests,” Saran said.

Yu Kea, a 40-year-old widow who was evicted without being provided land or compensation, said she was appealing to city officials for some compensation in order to have a place for herself and her four children.

“The important thing to me is I want to have a real shelter, wherever possible,” Kea said. “I have never worried about having high-value land or not. I just want a shelter.”

Some members of the community who did not provide their names told VOD that people built their houses and lived in that area for more than 20 years and have never had any issues with the authorities. They said that the 87 who received land had left peacefully, but one of the resettled community members suggested she will struggle financially in the new location.

A 30-year-old Banteay Sleok community member said that she received a 4-by-15-meter plot of land in Vihear Suor commune, but her new home is far from the capital and would limit her employment opportunities as well as affect her children’s education.

“It will be difficult when the children have to go back to school and I don’t know where [they will] go to study,” she said. “I am struggling to find income. At the old place, I could work for a factory, my husband worked as a construction worker and people were always coming to hire [us].”