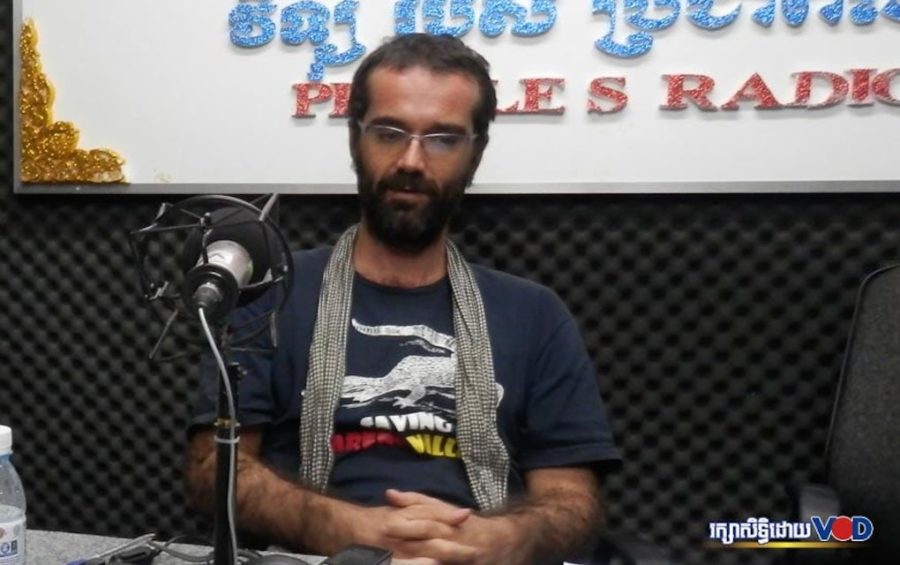 The Koh Kong Provincial Court on Thursday acquitted the founder of environmental group Mother Nature over a charge related to activists protesting sand dredging in the province in 2015.

Alejandro Gonzalez-Davidson — who was deported from the country five months before the events in question and has been denied re-entry since — was on trial for being an accomplice to threats to destroy property.

The three activists were jailed in response to a criminal complaint from sand-dredging firm Direct Access and charged with threats to destroy property. They were found guilty a year later and released with a suspended sentence.

Sand dredging has since been banned.

Gonzalez-Davidson was charged as an accomplice, but his case had failed to progress since November 2015 until he was summoned for trial earlier this year.

His defense lawyer, Sam Chamroeun, said on Thursday that the court had found Gonzalez-Davidson not guilty, but did not give its reasoning.

Gonzalez-Davidson, who is fluent in Khmer and well-known in the country as “Alex,” said he was surprised by the court’s decision as it was the first time he had seen a Cambodian court rule in favor of an environmental activist.

“The judge’s decision is very informative, and I accept it because, as I’ve said over the years, it’s the truth,” he said.

“This is worth a celebration and I’m excited and surprised, because I’ve never seen a prisoner of conscience having a charged dropped by a judge or found not guilty.”

He asked that the court overturn the convictions against the three Mother Nature activists previously implicated, including canceling their $25,000 compensation order against the sand-dredging company.

Provincial court prosecutor Un Sovanntheany said he had no information about the other three, San Mala, Try Sovikea and Sim Somnang.

Hour In, provincial coordinator for rights group Licadho, welcomed the court’s decision and also urged the courts to overturn the previous convictions in the case.

“In order to be fair to the other three activists, the Supreme Court should consider the case of the former Mother Nature activists,” In said.

Acquitting those activists would be important “to encourage other young people who are willing to protect natural resources to come forward,” he said.