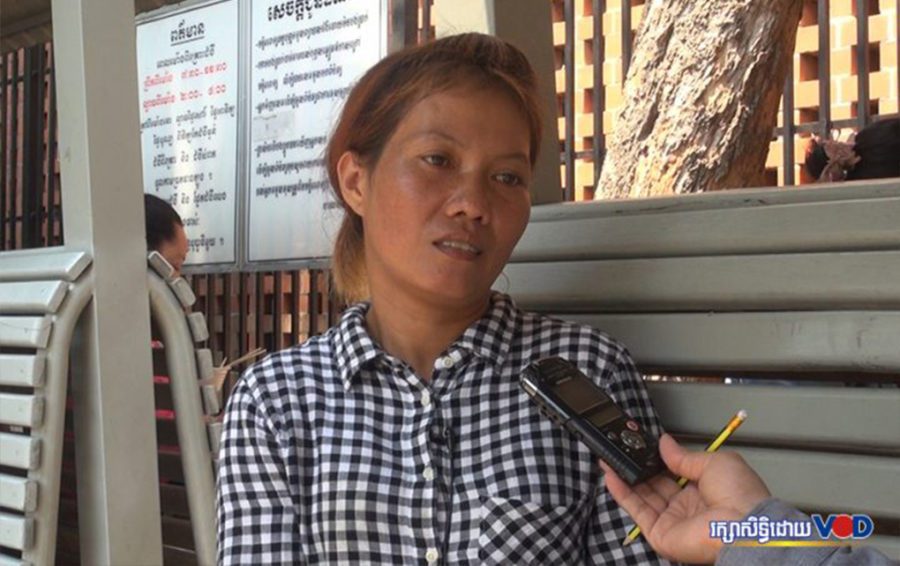 The mother of a 10-year-old girl who lost an arm inside machinery at a brick factory recalled the girl’s words after being treated at a hospital.

“Mom, will my arm grow back?” the girl had asked Khim Channa.

“And I replied to my daughter with a lie,” Channa said. “I told her that her arm will grow back. And my daughter turned her face from me and stared at her arm, but she didn’t cry. Not scared. Nothing at all.”

Channa spoke to a VOD reporter outside Phnom Penh’s Kantha Bopha Hospital where her daughter, Sreypheak, was still being treated on Tuesday, three days after the incident that cost Sreypheak her right arm. The arm was amputated after being mangled in a brick-making machine at the factory in Kandal province.

Channa said it was her daughter who was consoling her after the amputation.

“I didn’t know what to do. I just looked at my daughter’s face, hugged her and cried,” she said. “My daughter looked at my face, used her five fingers on her left hand to wipe off my tears, and told me, ‘Mom, it’s OK for me to lose one arm as long as I didn’t die. I didn’t die. I can still see your face.’”

Sreypheak remained in hospital after losing a significant amount of blood and to treat damage to her shoulder blade, Channa said.

“All these recent days, I keep crying,” she said. “In just the blink of an eye, I lost my daughter’s arm. I feel very sorry.”

Originally from Kampong Cham province, Channa, her husband and three daughters moved to Kandal’s Khsach Kandal district about six years ago to live and work at the brick factory. The family stayed in a house built by the factory’s owner in the compound.

Sreypheak and Channa together produced about 5,000 bricks a day and earned 8 riel (0.2 cents) per brick, a total of about $10 a day. All the income was used on living expenses, she said.

“I gave a small amount to the children. I bought clothes for them and also spent it on eating. I bought rice and some other food every day, and spent some when there was sickness,” she said. She could only work at the factory during the dry season, she added.

There was a school near the factory, but Sreypheak had decided to work to help the family repay debts, Channa said.

Sreypheak’s older sister, who is 12, also worked at a different brick factory, she said. The youngest, aged 9, is not working, though she also does not attend school.

“My daughter wanted to go to school,” Channa said of Sreypheak. “There is a school nearby the brick factory. They allowed my daughter to go to the school, but she decided not to go and wanted to help me by working. She wanted to help me work and earn money quickly and pay off our debt and return back home. But I couldn’t pay back my debt, and instead it has increased.”

Channa said the family owed $4,000 to the factory owner. About $3,500 had accrued over the years to help pay for living costs, she said, while Sreypheak’s injury had necessitated borrowing another $500 from the factory owner.

At the factory in Preah Prasap commune, staff said the case had already been settled, and owner Leang Srun was unavailable to speak to reporters.

The Labor Ministry has fined Srun over Labor Law violations and initiated legal action, filing a criminal complaint over his use of child labor as well as safety violations.

The ministry has also allowed the girl to access the National Social Security Fund (NSSF) to receive full treatment at the hospital and during rehabilitation without charge.

Vorn Veth, national project coordinator for the International Labour Organization, said he was shocked by the girl’s injury.

“Regarding the prevention of the workplace accidents, I think it is still a point we need to keep working on in order to push children or owners as well as related persons to participate in reducing the incidents, particularly in the form of child labor,” he said. “I think it is an important part that we, together, have to promote the awareness of using child labor, especially of children under 18 years old.”

Children should attend school instead of being sent to dangerous workplaces, he added.

Channa said she had promised to let Sreypheak start going to school.

“I will let my child to go to school in order to have good future. I won’t let her be uneducated when she has already lost an arm,” she said. “I will let her go to school as long as she wants. As long as my daughter agrees, I will help her. Even though I am very poor, and I will struggle to send my daughter to school.”

As for her older daughter, however, Channa said it was too late for her to start attending school.

Channa added that she would leave the brick factory and find another line of work for the family.

According an ILO report from 2012, 19 percent of the country’s 4 million children were involved in work, and about 11 percent did not attend school.