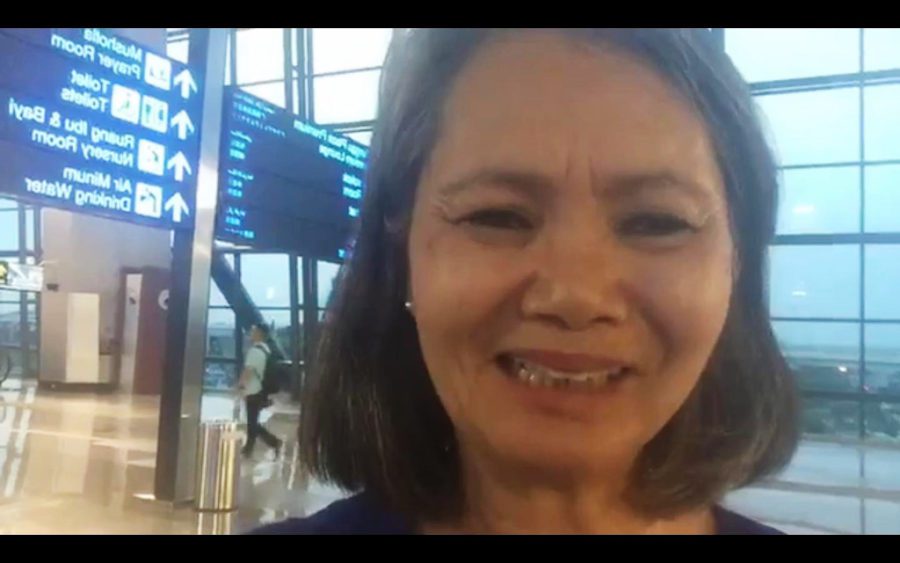 CNRP vice president Mu Sochua, in a video from Jakarta’s airport on November 6, 2019 that was streamed live on her Facebook page.

CNRP vice-president Mu Sochua has been detained at Kuala Lumpur International Airport after arriving there on Wednesday night from Jakarta, rights groups said.

Sochua, alongside senior leaders of the dissolved opposition party, have pledged to attempt a return to Cambodia on Saturday, November 9, an act the Cambodian government has labeled a coup attempt.

She held a press conference in Jakarta on Wednesday morning before flying to Kuala Lumpur that night, according to Human Rights Watch deputy Asia director Phil Robertson.

However, she was taken into custody after arriving around 9:30 p.m. on her U.S. passport, Robertson told VOD on Thursday.

“She has been detained by Malaysian immigration at KLIA,” he said, referring to the international airport.

Sochua had planned to undertake consultations with the Ministry of Foreign Affairs and other Malaysian government officials and civil society activists ahead of her planned return to Cambodia, Robertson said.

Jerald Joseph, a commissioner for the Malaysian Human Rights Commission, told Reuters that he had spoken to Sochua, who said she was told that she would not be deported to Cambodia. However, it was unclear where she would be sent.

Sochua’s Wednesday press conference in Jakarta was to outline the opposition’s return plans, though the meeting was interrupted by the Cambodian ambassador to Indonesia. Acting party president Sam Rainsy has meanwhile booked a Thai Airways flight from Paris that would arrive in Bangkok on Friday morning.

The CNRP has said it hopes to walk across the border from Thailand with the support of thousands of Cambodian migrant workers. In response, Cambodia has arrested more than 40 CNRP supporters in recent weeks for “plotting” a government overthrow and deployed armed forces along the Thai border.

Thai Prime Minister Prayuth Chan-ocha said on Wednesday that he would “not allow an anti-government person to use Thailand for activism,” and that Rainsy “probably” won’t get into the country.

Sochua was turned away by Thai immigration in Bangkok after she flew there from Kuala Lumpur last month.

The CNRP was dissolved in November 2017 two months after party president Kem Sokha was arrested and accused of working with the U.S. to topple the government. Sokha, who denies the accusations, remains under de facto house arrest in Phnom Penh.

“Malaysia should have simply allowed Mu Sochua to enter the country and conduct the meetings she planned,” he said in an email.

“No one has provided any evidence whatsoever that Sochua was going to cause problems or difficulties for Malaysia, she is simply exercising her rights to freely associate with other like-minded persons and express her views about the repression that is occurring in her Cambodian homeland.”

Robertson said the pair were in danger of being deported to Cambodia, where there was “no doubt” they would face immediate arrest.

“It’s really unclear why Malaysia has singled these two CNRP youth activists out for detention,” he said. “Malaysian Immigration should immediately give UNHCR access to these two Cambodian activists and enable that UN agency to place them under their protection as asylum seekers.”

Keatha is an asylum-seeker registered with the U.N.’s Office of the High Commissioner for Refugees. She was charged with plotting in Preah Sihanouk province on October 20, according to court documents seen by VOD.