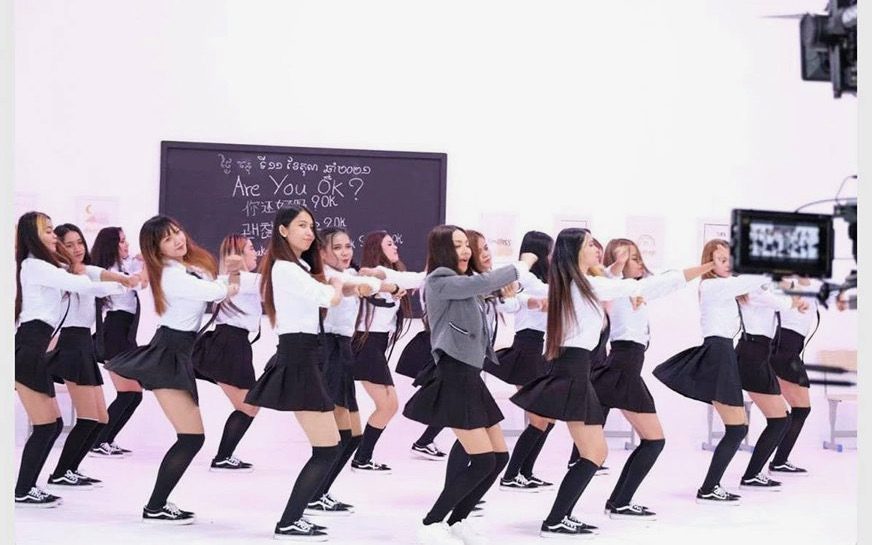 A screenshot of the “Are You OK?” music video produced by Leng Navatra’s production company.

The government says it has no issue with a provocative new music video of a singer and backup dancers dressed as Korean schoolgirls and carrying guns. But production company Galaxy has pulled the song online after a social media uproar comparing the video to the previous arrest and two-year imprisonment of a monk who posted a photo with a plastic gun.

The song, “Are You OK?”, has faced public criticism as social media users posted photos from the music video side-by-side with those of the jailed monk.

Galaxy president Leng Navatra, a tycoon who recently received state land in Siem Reap province, took to Facebook to address the criticism. He asked his production manager to immediately delete the video “at the request of fans.”

“We need to look at the shortcomings and improve them,” Navatra wrote.

Long Bonna Sirivath, spokesperson for the Culture Ministry, which has in the past chastised women for being too sexual in online videos, said there were improper gestures and language in the video.

“There is a bad word and our society does not accept this, and, secondly, there are the guns that the women are holding, showing signs of cruelty,” Bonna Sirivath said.

However, he said it did not cross the line into affecting the national culture, a line that has been used against videos considered to be infringing.

“In actuality and broadly speaking, anything if it is only a little, it does not impact the culture,” Bonna Sirivath said.

Interior Ministry spokesman Khieu Sopheak said there would be no legal action against Galaxy as there was no impact on security.

He added that it did not affect Khmer culture, which traditionally did not use guns.

“The national culture does not use guns, only swords and such to protect the territory and defeat the enemy,” he said. “We did not have guns at that time.”

In December that year, he was sentenced to two years in prison for incitement.

Am Sam Ath, spokesperson for rights group Licadho, urged the transparent and consistent application of the law.

It should be clearly explained to the public “why one thing leads to charges and detention, and why the law is not enforced the same way,” he said.

The video’s producer, however, wrote online that it was too bad the video had been removed.

“A song that cost more than $50,000 was deleted by Mr. Okhna’s order,” he wrote. “Sometimes all my efforts and the team’s are not met with rewards.”