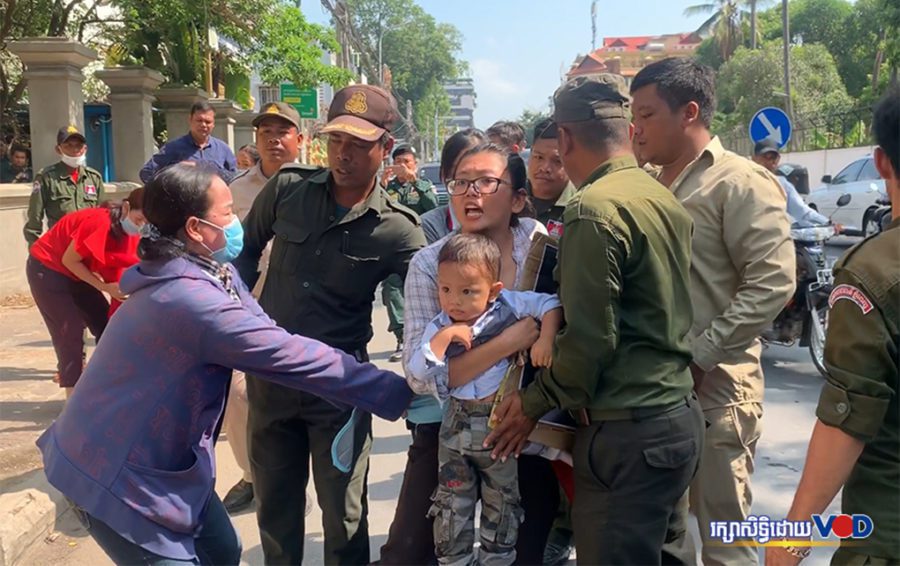 Long Kimheang, the wife of imprisoned translator Rath Rott Mony, holds her son as she is dragged by masked women and authorities while protesting in front of the Russian Embassy in Phnom Penh on April 3, 2019. (Hy Chhay/VOD)

Women wearing surgical masks and claiming to be acting on behalf of authorities prevented a protest in front of the Russian Embassy on Wednesday over the jailing of a translator who helped report on child trafficking for Moscow’s RT service.

Long Kimheang, wife of the imprisoned Rath Rott Mony, gathered with supporters in front of the embassy in Phnom Penh in the morning to call on Russia’s government, which operates RT, to help secure her husband’s release.

Yet Kimheang and the others present were forcibly removed by a group of six plain-clothed and middle-aged women wearing surgical masks. They claimed to be government authorities and dragged Kimheang away from the area.

Kimheang said the women refused to identify themselves or prove they had the authority to drag her away from outside the entrance of the Russian Embassy, which is a public area.

Rott Mony has been in jail awaiting trial for “incitement to discriminate” since December 13 for helping a foreign journalist produce the program “My Mother Sold Me,” which aired on RT in October. The program featured an interview with a girl who says her mother prostituted her but the government says the claims are false and that the program reflected poorly on Cambodia’s international reputation.

Kimheang said she believed that the six masked women were sent to harass her and her husband’s supporters in order to discourage any further protests.

“I suspect this was a set-up by the Cambodian authorities to have these women come and disturb me with bad intentions against my activities, or to come and spark violence to make an arrest or intervention from the authorities,” she said.

Kimheang said she steadfastly refused to react to the women with any violence, even when they started grabbing her clothes and pulling her down the street while she carried her child in her arms. If the Russian government still did not intervene to help secure her husband’s arrest, she added, she would continue to go to its embassy to protest undeterred.

San said he too did not know. He referred questions back to the district governor.

Soeng Senkaruna, a spokesman for local rights group Adhoc, said it was the responsibility of government authorities to identify themselves to citizens when asked, and that Kimheang may have a case to complain about illegal harassment.

“In our Cambodian law, the relevant officers who go to complete their work have to clearly show their position to people at the scene so they know their identities,” he said. “They cannot just arrive with such behavior. If there was any provocation that happened at that place, the [legitimate] relevant officers who were present there would have to take share a responsibility for any problem that occurs.”

Kimheang and her supporters have now protested at the Russian Embassy 12 times since his arrest. There has been no response from the embassy.

Edited at 4:42 p.m., April 4 to clarify Rath Rott Mony’s role in the production of the film.

Watch more on the story: