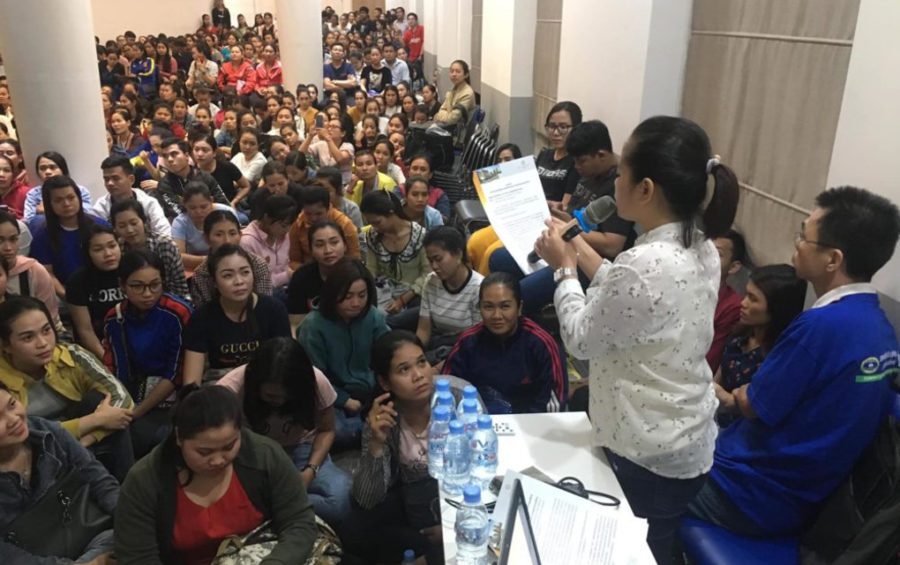 A union leader at Phnom Penh casino NagaWorld said she has been suspended over a campaign for higher wages.

Chhim Sithar told VOD that the union had printed T-shirts with a slogan that translates from Khmer to “The Company Is Growing; Workers Need Living Wages,” and distributed them to 3,000 employees.

She was suspended after intervening when security guards tried to confiscate a T-shirt from an employee on Saturday, Sithar said on Wednesday.

She asked for an explanation and met with human resources, she said. The company told her the T-shirts would affect the image of the company and violated its internal policies, according to Sithar.

Sithar and 27 other employees were suspended, but the 27 others were reinstated after protesting, she said.

“Suspending from work a union leader who represents thousands of workers is a serious discrimination against unions by the NagaWorld company,” Sithar said.

The union had submitted its request for a raise for workers in June, and the company had promised a response by September 21, she said.

She and seven other union representatives were due to meet with the company at 4 p.m. on Wednesday, but later said the meeting had been delayed until 6 p.m. on Thursday.

On Thursday, the union also submitted a petition with more than 3,000 thumbprints to the Labor Ministry requesting its intervention, Sithar said.

Amid the dispute, 3,826 employees have decided to take three days off over the Pchum Ben holidays despite being warned by the company that absentees would be fired, she added. NagaWorld has more than 4,000 union members and 8,600 employees in total, Sithar said.

Dy Seyha, NagaWorld’s communications manager, declined to comment, saying she was too busy.

Ry Sovandy, a dealer at NagaWorld, said employees were asking for a raise in monthly wages to $300 for those who work in the hotel and $500 for those on the casino floor. The workers are currently paid $191 to $200 and $230 to $300, respectively, according to the union.

The company’s lack of response had prompted the employees to prepare their campaign, Sovandy said.

“We work for NagaWorld and we need to survive in Phnom Penh, where costs of renting a house and other things are expensive,” she said. “So I ask the government to intervene and find a solution, and urge the company to respect the law, especially regarding the rights of unions.”

The casino’s employees would continue to make their demands until they received a response, she added.

Labor Ministry spokesman Heng Sour could not be reached for comment.

NagaCorp currently operates an exclusive license to run its NagaWorld casinos in Phnom Penh, and recently announced a $4 billion “Naga 3” expansion on the back of more than $390 million in profits last year, a 53 percent year-on-year increase.