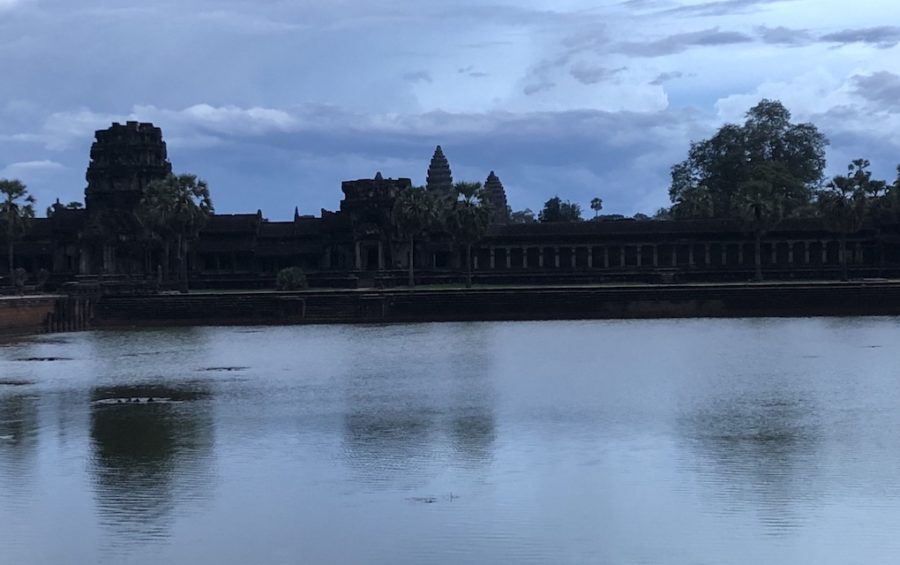 Just 500 meters from Angkor temple park grounds, casino operator NagaCorp has proposed a giant 75-hectare resort with theme parks, a “China Town” and hotels that the company compares to Disneyland.

The resort, tentatively named “Angkor Lake of Wonder,” will be situated south of the Angkor Archaeological Park’s protected area in Siem Reap province and is expected to have its initial phase of construction complete by 2025.

NagaCorp, which operates Phnom Penh’s NagaWorld casinos under an exclusive license from the government, announced its “vision” for the non-gambling resort on Sunday.

The government has granted the company a 50-year lease on a “prime piece of development land” just about 500 meters south of the outer restricted zone of the Angkor temple complex, the announcement says.

The first seven to 10 years will be rent-free, with the company paying about $450,000 a year thereafter, with a 5 percent increase every five years. Over the 50 years, Naga would pay a total of at least $21 million, or about $29 per square meter.

The proposed resort is about twice the size of California’s Disneyland, the company notes.

NagaCorp has begun initial discussion with an unnamed Chinese state-owned enterprise that “has expressed sufficiently serious interest to finance, build and complete” the project, the announcement says.

The Chinese firm is a “theme park builder” and “reputable and sizable contractor” involved in Shanghai Disneyland, it adds.

The planned resort will capture visitors to Angkor temple park — about 5 million people a year before Covid-19 — attract new visitors to Cambodia, and push more tourists to visit both Siem Reap and Phnom Penh, the company says.

Among transport options to be developed between the two cities, NagaCorp proposes water planes that would fly between the Tonle Sap lake near Siem Reap and the Mekong river near NagaWorld in Phnom Penh.

Government spokesperson Phay Siphan said the decision to grant the land to NagaCorp was a matter of trust.

“NagaWorld has stayed in Cambodia since long ago, and [we’ve] endured happiness and pain together,” Siphan said, when asked about transparency and the bidding process. “The government’s decision is based on trust.”

He added that the resort would create jobs, and since gambling would not be allowed at the Siem Reap site, there would be little detrimental impact on the Unesco World Heritage-listed Angkor Wat.

“We only allow the operation of tourism — that destination will not impact our temple,” Siphan said.

David-Jaya Piot, president of the Cambodia Hotel Association in Siem Reap, said he welcomed the development.

“It will be good because it will provide more jobs for our Siem Reap people and develop the city,” Piot said, before adding, “I hope they will do it properly.”

The concern was traffic and lack of other infrastructure as the tourist city grew, Piot said. Siem Reap already struggled with traffic jams and could not handle a greater influx of people, he added.

The Tourism Ministry is working on a master plan for the city, planning a new satellite city closer to the airport. The provincial administration has also been working on a road widening project, which has affected hundreds of residents who had built onto the roadway.

Apsara Authority spokesperson Long Kosal said there would be no impact on Angkor park’s cultural value.

“The land that the company is getting is located outside the world cultural heritage protected area,” Kosal said. “It is a location that has been kept as a place for providing tourism services … for such developments.”

Sun Chamnan, head of the provincial administration, said the investment project, in Slakram commune’s Boeng Donpa village, had been under discussion for a long time.

It was hoped that tourists would stay in Siem Reap for longer trips thanks to the resort, he said.

“When we establish the cultural resort, it will attract more tourists beside the Angkor temples. We have a new product to receive tourists,” Chamnan said. “It will bring more jobs for our brothers and sisters.”